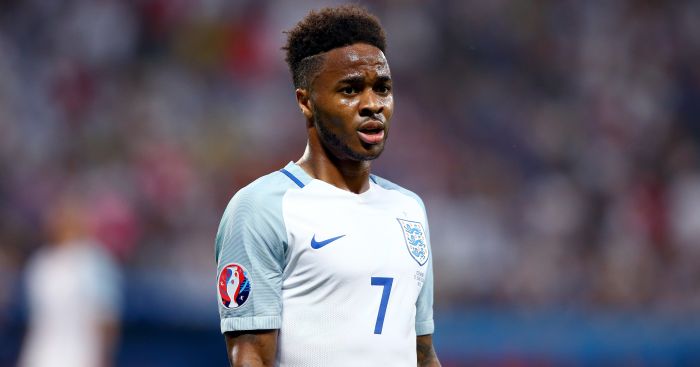 Former England coach Gary Neville has revealed that he had a conversation with Raheem Sterling in 2016 where the winger said he felt “targeted” by abuse from the stands and media.

Manchester City were beaten 2-0 by Chelsea at Stamford Bridge on Saturday evening, but the game was overshadowed by an incident involving Sterling as he prepared to take a corner.

The England international was seen laughing as a number of Chelsea ‘fans’ hurled verbal abuse at him because he kicks a football for a different team.

Sterling confirmed on Sunday that the abuse he had been subjected to was at least partially racially motivated, and that he “just had to laugh” because he expects”no better”.

Chelsea have now announced that they have banned four fans from attending matches over the incident, pending further investigations into the allegations about the behaviour of fans towards Sterling.

Neville, who worked as part of Roy Hodgson’s coaching team for Euro 2016, thinks a lot of the criticism Sterling took during that tournament was underpinned by racism.

“Out of a negative, there’s a big positive. On Sunday, when I saw it break on social media, I saw Raheem’s statement. It’s provoked a huge reaction from everybody,” Neville said on Sky Sports’ Monday Night Football.

“Coming onto this programme, I was thinking about my experiences of him with England. I had a personal experience in 2016 directly with him. I felt as though it was breaching player-coach confidence in terms of what happened, I felt it important that I didn’t breach his confidence. But I think it’s actually the right thing to do.

“He came to see me one on one in 2016, I think it was three or four days before the Iceland game.

“Pre-tournament, I don’t know if you remember, he was getting absolutely battered. Getting so much stick, we were aware of that. Fans were onto him, the media was onto him. Asking a lot of questions about him.

Neville added: “It then continued into the tournament, into the stadiums, to the point where those groans and boos, little things. It takes a lot for a player to come and see a coach. I was in the analysis room, I remember the analysts leaving.

“But that it was so vicious, he felt so targeted, he didn’t know what to do about it.

🗣 | Gary Neville on the Raheem Sterling incident at Chelsea and an experience he had with Sterling whilst coaching with England: pic.twitter.com/NxlZ005EJM