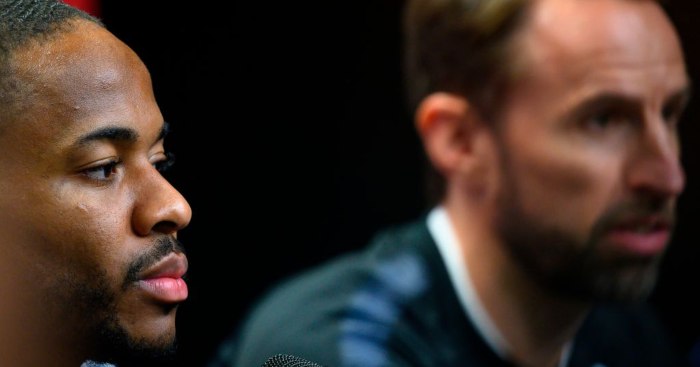 Raheem Sterling and other members of the England squad think Gareth Southgate ‘overreacted’ to the Manchester City winger’s bust-up with Joe Gomez, according to reports.

Sterling stayed with the group and apologised to team-mates at a meeting on Monday night, then trained as usual the following morning.

Gomez appeared to be sporting a cut close to his right eye in the session with rumours that he could have picked it up off another team-mate that was trying to break them up.

However, the Guardian claims on Wednesday that privately Sterling and ‘others in the squad’ think the England boss ‘overreacted’ to the incident.

When asked if the players agreed with his decision, Southgate told the press on Tuesday: “I always have to find the right solution for the group and for how we will work moving forward – that’s a very difficult line. I won’t always get that right but in the end I’m the manager.

“I’ve made a decision and I think it was appropriate for how we want to work moving forward. Raheem is a very important player for us but I felt it was the right thing.”