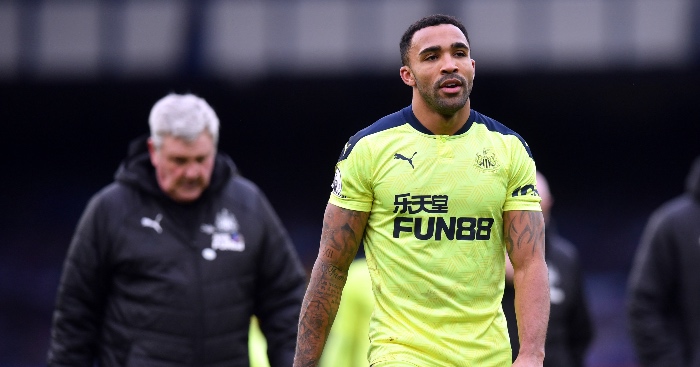 Steve Bruce is ‘delighted’ for Callum Wilson after the striker scored two goals for Newcastle in the victory over Everton.

Newcastle showed improved attacking threat in the recent loss to Leeds and continued that against Everton.

Wilson saw his header tipped onto the crossbar by Jordan Pickford in the first half.

The Englishman eventually managed to open the scoring in the 73rd minute.

He headed a Jonjo Shelvey corner into the net after gaining a yard of space from Richarlison.

Wilson doubled Newcastle’s lead in the 93rd minute. He was found by Jamal Lewis in behind the Everton defence.

The striker took one touch before burying the chance past Pickford.

Speaking after the match, Bruce told BBC Sport: “It was a good team performance. Over the last few weeks in particular we’ve tried to work on getting after the ball, pressing higher up the pitch and being more forward-thinking.

“They’ve bought into it. I saw signs against Leeds in midweek and hopefully this will give us a bit of confidence.

“We’ve been working on set-pieces, and it’s ironic that we got the goal from a set-piece. It was good to get one today, that’s for sure.

“I’m delighted for Callum. He’ll rightly get the headlines, but the effort from the whole squad behind him was good to see.”

Bruce has come under in recent weeks due to the team’s form. This win will be a huge boost of confidence to everyone at the club.

Speaking about his situation, Bruce continued: “I knew the job was going to be difficult. I walked in with my eyes wide open. I always judge people when you’re up against it.

“You need to keep your dignity, your belief and [see] if you can work a bit harder. It’s been tough, but when everyone’s fit and available we’re a decent outfit. When we aren’t, it becomes a bit of a struggle.”

Their next match is against Crystal Palace on Tuesday 2nd February.