Home All The News Bruce ‘delighted’ to get Newcastle trio back; ‘two or three’ self-isolating 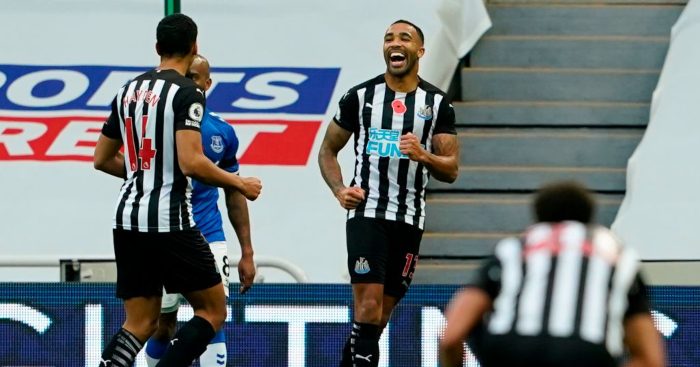 Newcastle United will welcome back top-scorer Callum Wilson from injury as they look to return to winning ways at Crystal Palace, but boss Steve Bruce revealed “two or three” unnamed individuals are self-isolating.

Wilson* has been a hit since arriving on Tyneside from Bournemouth over the summer, scoring six goals in eight Premier League appearances, and his presence was missed as the Magpies were beaten 2-0 by Chelsea last weekend.

He was not risked because of a hamstring problem sustained in the defeat at Southampton earlier this month, but the striker returns to contention, with Jonjo Shelvey and Matt Ritchie also available after their recent injuries.

FEATURE: One substitute pushing to start at each Premier League club

“We’re delighted to see Callum back,” Bruce said. “He’ll be fit, he’s trained all week. We didn’t think we could risk him (against Chelsea).

“Already he’s made a difference. He’s got six goals in eight games in the Premier League. He will be available which we’re delighted about.

“We’ve got Jonjo, Matt Ritchie and Callum Wilson back, they can only be positives.”

While a couple of others are struggling with niggles, Bruce admitted there had been a minor outbreak of coronavirus at the club, although he would not be drawn on those affected.

“Covid is one problem we have to manage but I don’t really want to go into individuals,” Bruce added. “We have got two or three individuals in the training ground at the moment who are self-isolating.”

Back-to-back defeats have turned up the heat a little on Bruce, who acknowledged their performances against Southampton and Chelsea were not good enough.

While he is looking for an improved showing at Selhurst Park on Friday evening, Bruce pointed out both Saints and the Blues temporarily went to the top of the league table by beating Newcastle.

“Make no mistake against Southampton and Chelsea, we found it difficult and didn’t played well enough,” Bruce said.

“In both games we’ve conceded in the first 10 minutes. We’ve got to give ourselves a better platform than that. But in those particular games both teams beat us to go top of the league. They’re in a rich vein of form.

“Crystal Palace is an ideal opportunity to try to bounce and put in a performance like we did (in a 2-1 win) against Everton which was only three weeks ago by the way.”

*Buy Callum Wilson and thousands of other players on Football Index. 18+, UK and Ireland customers only, begambleaware.org. T&Cs apply.