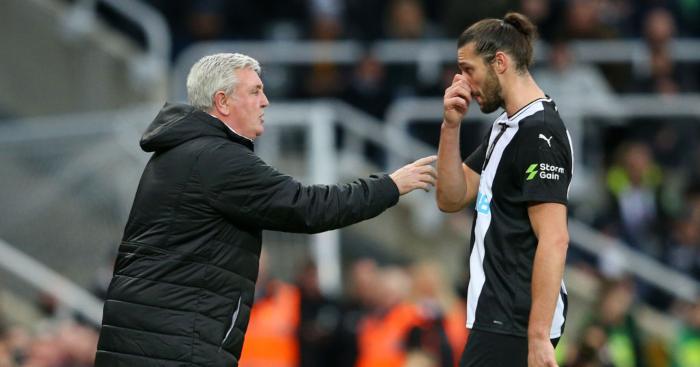 Newcastle head coach Steve Bruce has revealed striker Andy Carroll has suffered a setback in his bid for fitness.

The 31-year-old has managed just 14 appearances to date this season and has been out since the middle of January with a troublesome hip problem.

Bruce said: “The big problem we’ve got still is Andy’s not right, so that’s a concern to us going forward. We expected him to be okay and unfortunately, he’s not. Everybody else is the same as what we are.”

Asked if the injury is more serious than was first feared Bruce added: “We don’t think so. Thankfully, it’s not his ankle, but this hip, hip flexor, whatever it is.

“When he gets to a certain level in his rehabilitation, he’s still not quite right, so we’ll just have to keep monitoring it and see how he is.”

Carroll re-joined his first club on a pay-as-you-play deal in August last year as he continued to work his way back from ankle surgery, but has been unable to have the impact on the pitch for which both he and Bruce had hoped because of fitness concerns.

Bruce said: “It’s a big frustration. There was a time just before Christmas when we were looking and he’d made a few assists and started a few games, and that was exactly why we brought him into the club.

“Unfortunately, he’s picked up this injury, which is frustrating because all of a sudden, it’s drifted into five, six weeks when we expected it to be 10 days.

“I’m sure he’s as frustrated as we all are, but unfortunately he’s got to try to get fit and hopefully he’ll be ready in a couple of weeks, or whenever it will be.

“We’re not putting a timescale on it. It’s just the way it is.”