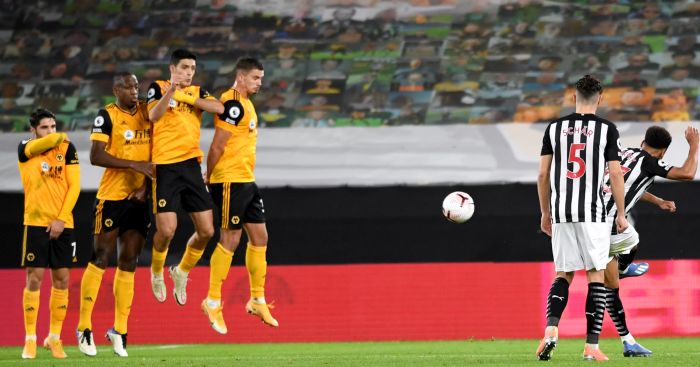 The winger’s late free-kick cancelled out Raul Jimenez’s fourth goal of the season to grab a 1-1 draw.

Murphy’s last top-flight strike came in January 2018 and he has since had loan spells at West Brom and Sheffield Wednesday after struggling to make a consistent breakthrough following his move from Norwich in 2017.

But Bruce praised his impact after playing him out of position at wing-back due to the Magpies’ injury problems.

Bruce said: “He was arguably our best player today and I’m delighted for him. He had a big loan at Sheffield Wednesday last year and that did him the world of good.

“I never contemplated it (a loan move) from the first week he was back. He was a different player. Certainly physically he’s come back in really good condition.

“We all know he’s a good athlete and he certainly looks like he’s matured. He had been practising free-kicks on Thursday in training and I was thinking ‘let’s see if he can do it again’.

“The development is there for everybody to see. Now it was about ‘can he come and perform at this level?’ He was certainly comfortable.

“I’m delighted with the resilience of the players especially with the problems we had, lot of players were out of position.”

Wolves boss Nuno Espirito Santo was left to lament two dropped points. He said: “I have to see the Newcastle goal again but the ball cannot go on that side of the wall, it cannot go in. If it goes over the wall we can deal with that but it cannot go in that side.

“We were without problems until we got the goal we deserved and then we should manage the game better.

“We made a mistake on the set-up of the wall. We were solid and didn’t allow any chances to Newcastle, in that part we are positive but we are upset because we didn’t solve the problem.

“We had a lot of shots, not a lot on target but that’s something to improve on.

“We played well in terms of possession, Newcastle are very organised but we were in control. In the second half we were almost playing in our offensive side of the pitch but we made a mistake which punished us a lot.”