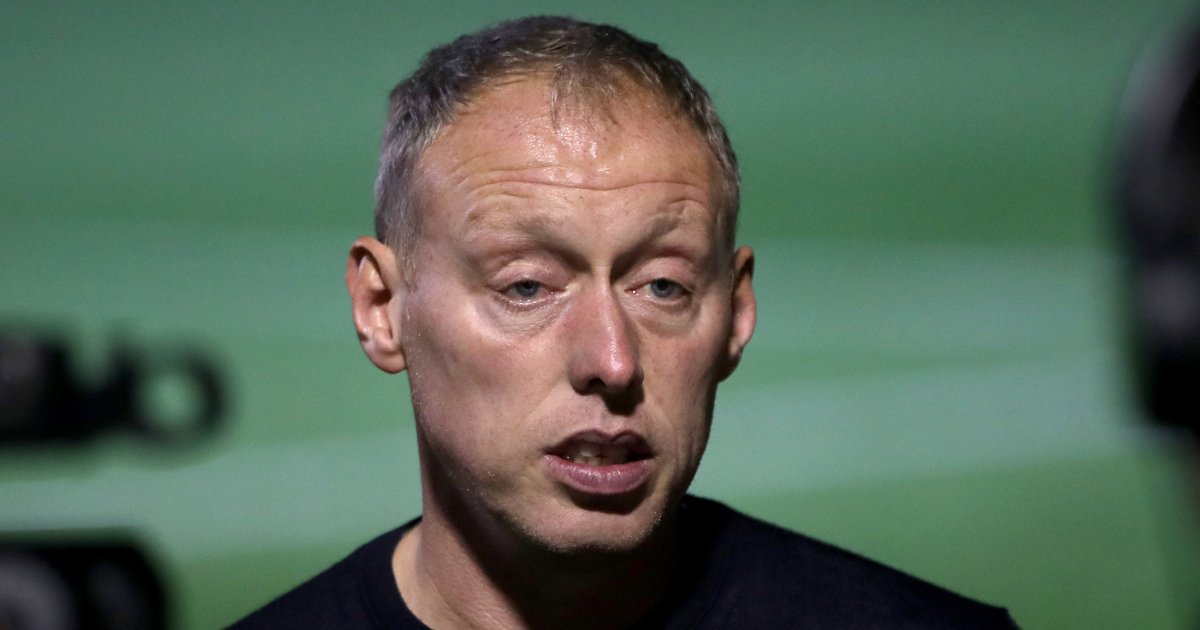 Only one man could be top of the Championship winners this week, while one old guard manager might be on his way…

Steve Cooper
Yes. Yes. Yes. That’s how you do it. If Saturday’s 1-1 draw against Millwall was a brief taste of some of the good things to come under Steve Cooper, then Wednesday’s 3-1 triumph over Barnsley was a spoonful of sugar to help the medicine go down.

Predecessor Chris Hughton’s side went into themselves after semi-decent first-half performances, most notably the opening-day defeat at Coventry City. It was turning draws into defeats time and time again. Those defeats ultimately cost Hughton his job and in just enough time to allow the right man to save Forest’s season.

It is too soon to definitively prove Cooper is that man; this is no mini-task ahead of the former Swansea City manager, but he has the credentials, the experience in this division and now some tangible proof of improvement with his current employers. Trailing at the break, Forest improved in the second half, catching Barnsley’s high line out time and time again and executing it to deathly perfection on three occasions in front of a jubilant away end in South Yorkshire.

Millwall and Barnsley may not be the toughest of tests, but they were tests Forest had been failing with sinking colours. They are the tests that Forest needed to pass to achieve the minimum mark of staying in the second tier this season. There are grander plans to come in the long term, and it would be incredibly naïve to believe this is the era that changes that, but Cooper is doing what is needed right here and right now. That’s the best he, and everyone connected to Forest, can ask for.

Brennan Johnson
When a managerial change occurs, the best players from one era can disappear into the ether in the next, while a previously disbanded performer becomes a key figurehead under the new man. Boyhood Forest fan Brennan Johnson has been a bright spark in an otherwise desolate start to the season, being one of, if not, the best performer in the opening six weeks of the season under Hughton, and the young winger’s performance against Barnsley – capped with an assist and a goal – bridged the gap between Hughton and Cooper. The future is beginning to look bright at the City Ground in more ways than one.

Luton Town
Six games without a win, followed by the most colossal of victories. Luton’s last league win was followed by a 5-0 home reverse to Birmingham City. This bookended haul takes the Hatters up to ninth, despite this being their first three points of September. The season is very much wide open. For a team as varied as Luton, that could be very good or very bad. Based on this evidence, it will be the former.

Deduction Derby winners Derby
Derby County have already received their 12-point deduction, and came oh so close to eating into it against Sheffield United until a moment of Curtis Davies madness. At home to Reading, themselves awaiting a deduction of either six or nine points, Derby did what Derby do best under Wayne Rooney, who is fast proving himself to be amongst the best managers in the division.

The England record breaker for goals scored has put together one of the greatest defences in the second tier, and in taking the lead and holding onto it, left-back Craig Forsyth’s goal ensured the Rams are the only side not to fall behind at home in the second tier this season.

Three points takes Derby back to positive points. They are far from written off this season, and with Rooney at the wheel, they have every chance of defying the EFL and staying up. It might not be the most romantic of tales given what has happened to this point, but it would make Rooney one of the hottest properties in the managerial game. If Frank Lampard’s job at Pride Park was enough to earn him the Chelsea gig, then a question for Manchester United fans – is Rooney a better manager than Ole Gunnar Solskjaer?

Valerien Ismael
Such is the expectation on West Brom to make an instant return to the Premier League, head coach Valerien Ismael has come under a substantial amount of scrutiny after a ‘tough’ start to September which saw the Baggies draw three successive games in a trio of extremely winnable matches.

That Ismael was still to taste defeat in the league and yet encountered his team being booed by small sections of fans at the Hawthorns during and after games and a whole heap of negativity on social media – and yes, that does matter – spoke volumes of how much results and excitement are expected.

But we must hate the game, not the player. Clubs relegated from the Premier League are treated to the glorious riches of parachute payments, meaning expectations are always elevated. We must not attack the West Brom fans who want maximum return, but accept that those expectations arrive with good reason. Ismael has done that and guided the Baggies to two victories in very different circumstances, grinding out a home win over QPR before dismantling Cardiff City on Tuesday night in the Welsh capital.

West Brom fans will do well to remember the near miracles Ismael worked with a far inferior Barnsley squad last season. Six wins and four draws later, West Brom are every bit as capable as anyone of going one further than the Tykes.

Ilias Chair
Chair is a wonderful young player, with magic in his boots (and that genuinely might not be figuratively if you’ve seen the diminutive talisman at his best). It was evident from his loan spell with League 2 Stevenage some years ago and the Moroccan now dons the number 10 shirt for QPR. But after such a great rise comes an inevitable fall and he was culpable against West Brom at the weekend.

But Chair picked himself up by scoring a double – one deflected and the other a well-taken strike – to bring to an end of three straight defeats in four winless games. Talk about redemption.

Alex Mowatt
‘Ave it. Alex Mowatt should register that left foot as a weapon of mass destruction. There are players who don’t score tap-ins and then there is Alex Mowatt. His decision to follow Ismael to West Brom is looking smarter by the match. Keep this up and he’s a contender for Player of the Season. He’s a shoo-in for the best signing of the summer too.

Danny Ward
But for injuries throughout the latter stages of his career, Danny Ward could have been one of the Championship’s top marksmen, possessing all the traits needed to be a sharp shooter in the second tier. Tuesday night’s double against Blackburn showcased just how good the former Cardiff and Rotherham forward can be when fit and firing.

An all-round energetic performance was capped with two well-taken second-half goals which were the difference between winning and losing. After recent results for Huddersfield, and recent years for Ward, this was just what the physio ordered.

David Cornell
When Wales goalkeeper David Cornell was brought into Peterborough over the summer, he was very much expected to be back-up bordering on competition for first-choice Christy Pym. But Pym has been dropped by manager Darren Ferguson in recent weeks over misconduct in the changing room after a match, leaving Cornell deputising between the sticks.

Enter stage right, promotion-chasing Bournemouth. The Cherries, happy for their second bite at the Championship, rocked up at the Posh on a run of four straight wins but found no way past the former Northampton number one. A first Peterborough clean sheet, against Scott Parker’s men of all teams, will be a big confidence boost for the entire team.

Alexsandar Mitrovic
We’ve been here before. When Mitrovic excels at this level, we are all a little guilty of not giving his output the requisite attention. A first-half hat-trick against Swansea took Mitrovic past 50 second-tier goals in just his second full season at this level. He is quite ridiculous.

Tom Eaves
The scorer of Hull’s second goal since the opening day of the season, Eaves’ strike earned what could be a crucial point in kickstarting Hull’s campaign after the false start that was the 4-1 opening day victory at Preston. A home draw against fellow promoted side Blackpool is not what dreams are made of, but it may just light the touch paper of the Tigers’ season.

Jed Wallace
A penalty it might have been, but Jed Wallace’s spot-kick was the only goal of a game between two sides who appear destined for mid-table come May. It was a first win in six for the draw specialists, but lifts the Londoners to a point behind Nigel Pearson’s top-half side, and just four points off a play-off place. In another set of fixtures which threw up more than a few surprises, fantasies of being able to get something more from this season is cause for celebration.

Mick McCarthy
Like Chris Hughton, this is one old guard of the Championship managerial elite whose number appears to be up. He brought a serious case of new manager bounce with him to the blue corner of south Wales when he rocked up in the middle of last season, but just as Neil Harris’ time with the club came to a catastrophic end, so too is his replacement’s, for whom time is fast running out to make amends for successive thrashings and four straight defeats.

McCarthy never appeared to be the long-term answer; it is becoming patently clear he is no longer the right man in the immediacy either. Cardiff are dropping like a stone. They would do well to drop McCarthy too.

Curtis Nelson
It takes some effort to be one of five centre-backs starting in a home match and still stand out as by far the worst on the night. While none of the quintet shone in a 4-0 drubbing at the hand of West Brom, Nelson’s performances of late have been the most disastrous, culminating in getting the finishing touch for an own goal that would make even Danny Baker blush. In truth, no defenders can take solace from conceding nine goals in two games in the space of four days, but Nelson has been comically bad in both contests, so he makes the cut here.

Coventry City
Where did that come from? It is of course important to remember that this is one game. Whether losing by one goal or five, and Coventry did the latter, it is still three points dropped, or zero picked up. The goal difference takes a hit, but that is of little to no consequence at this stage of the season.

Coventry’s superb start to the season has been borne out of their imperiously perfect home form, so defeat to Luton, albeit out of sorts themselves, should not cause great cause for concern. They are here because this is a big bump back down to Earth, and conceding five goals is never a good look. But make it six home wins from six at the weekend against Fulham and this will be a mere bump in the road and the briefest of sojourns to the losers section of this column.

Barnsley
To reiterate what was said here at the weekend:

‘Barnsley were in similar trouble at the start of last season – a poor start led to Gerhard Struber’s departure and in turn, the arrival of Ismael. If the rest is history, then so too might be Schopp with more poor results and performances.’

Another poor result and performance later, Schopp’s position is no better. They are in the bottom three on points earned this season. They are perhaps bottom of the entire pile for optimism of changing that. Right now, Derby – with their 12-point deduction – look superior and more likely to finish above the Tykes.