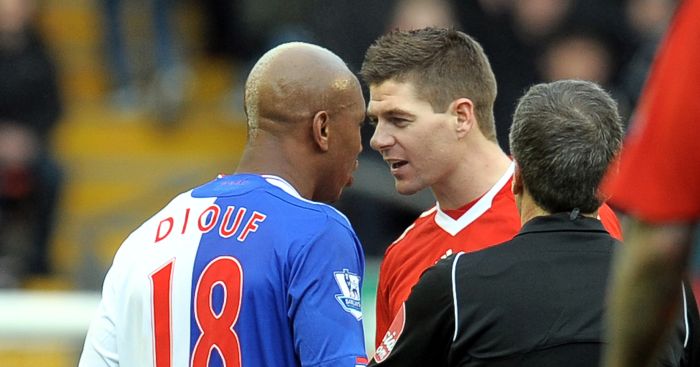 Diouf and Gerrard have had a rivalry dating back many years, with the latter once seeking legal advice in late 2015 after the former claimed he “disliked black people”.

The former Senegal international has also accused Gerrard of “killing” the Merseyside club and being “jealous” of his talent. He stated in November 2016 that the Liverpool legend was “nothing at all”.

OPINION: Nothing short of football’s total collapse is coming…

Sinama-Pongolle was part of the same team under Gerard Houllier at Anfield and the forward has recalled a specific dressing room bust-up between Gerrard and Diouf.

In an interview with journalist Walid Acherchour, Sinama-Pongolle said: “Half-time of a preseason game. Fight between Diouf and Gerrard. I was traumatised. Can you imagine the young ones seeing this and thinking that’s what professionals are like at that level? At half-time, in the dressing room. Stevie G is all like ‘you have to pass, you have to pass’ and [Diouf] just loses it.

“He didn’t speak English. His English was rubbish. You know what he did? They hated each other so much. Steven Gerrard arrives, he insults Diouf. ‘Hey, you f******…’.