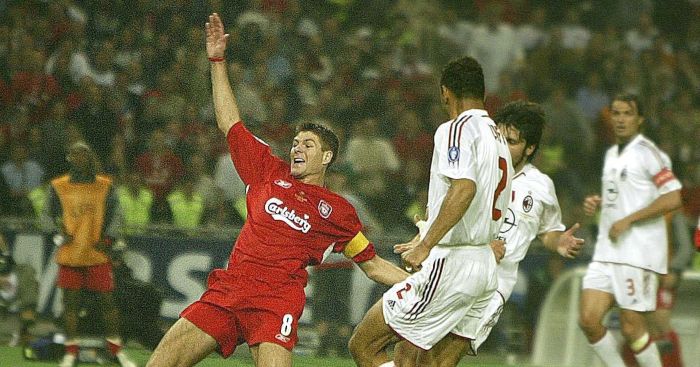 Liverpool legend Steven Gerrard has recalled “one or two things” that AC Milan did in the 2005 Champions League final “which really angered me”.

Gerrard helped inspire Liverpool to the most unlikely of European Cup victories from 3-0 down at half-time, with the Reds winning a penalty shoot-out after a 3-3 draw.

The captain scored the first goal and won the penalty for the third in an inspiring performance 15 years ago, but only after Milan tried to stick the knife in.

Gerrard remembers Andrea Pirlo trying nutmegs and Gennaro Gattuso “smirking” when the Italians took a three-goal lead they would squander midway through the second half.

“The first half was a nightmare,” he told The Athletic.

“Kaka destroyed us with his pace. Harry [Kewell] went off as well and I felt for him because it looked like he was throwing the towel in when he wasn’t. He was struggling with his fitness and Rafa gambled and it didn’t pay off.

“People forget but we should have had a penalty as well when Luis [Garcia] had a shot and it struck Nesta’s arm but the referee waved play on and suddenly, it was 2-0 and 3-0. I thought we were dead and I wanted it all to end.

Genesis of a goal: Gerrard, Kaka and a moment to rival the slip

“Something had to be done about Kaka because he was getting in behind me and Xabi [Alonso] but Carra and Sami [Hyypia] weren’t able to try and stop him because they were occupied by Shevchenko and Crespo.

“Kaka was easily Milan’s best midfielder. Gattuso made a lot of noise but he never worried me. He’s not the sort of midfielder to play a brilliant pass or score many goals.

“He played up to the fans but as an opponent, he didn’t scare me. I remember him smirking after it went to 3-0. One or two things happened before the end of the half which really angered me. Pirlo started trying nutmegs and as we walked off, some of the Milan players were waving to their families.

“It seemed to me they thought the game was done as well, that it was party time. I was furious but I couldn’t find the words.”