Home Arsenal Will Steven Gerrard be the next Gary Neville? 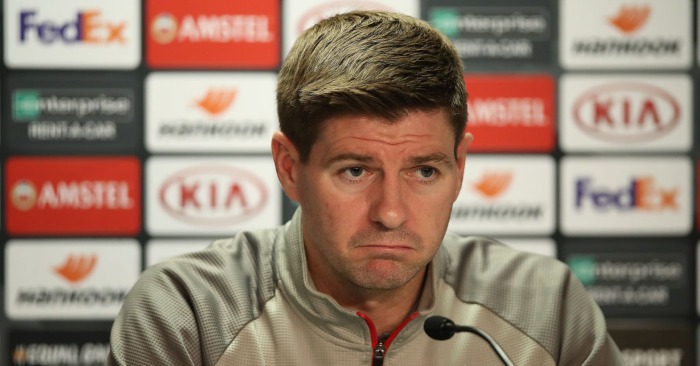 Jose Mourinho wasn’t the first big-name manager to reach the very top without a recognised professional footballing career, but he perhaps removed the stigma more than anyone. His background did not fully emerge until he sauntered onto the elite stage and stunned everyone with FC Porto, first winning the UEFA Cup in 2003 and then the Champions League a year later. His breakthrough moment came when he sprinted down the touchline after Costinha’s last-minute winner in the quarter final against Manchester United; everyone suddenly sat up and took notice of The Translator.

There was no rule that said a top coach had to first be a top player, but it was certainly the very smug, pompous opinion of many. The argument was that not being in and around the very top on the pitch would mean a coach couldn’t possibly understand what was required mentally or tactically. It was Arrigo Sacchi, a virtual nobody before he arrived at AC Milan in the late 1980s and created one of the most fabled club sides in history, who summed it up best with one quote. When asked about his lack of playing career, he simply said: “I never realised that to become jockey, you needed to be a horse first.”

Mourinho’s career has led the way for others who have either played at a very low level or not at all. And yet there is still that lingering belief that talented players make astute managers. No evidence suggests there is a correlation between being a great player and a great coach, but if the former decides to try their hand at being the latter, they are afforded that opportunity purely because of their reputation within the game rather than any specific credentials.

Of course, there is nothing to say the transition cannot be made; Pep Guardiola is arguably the best coach on the planet, having been a linchpin in Johan Cruyff’s Barcelona Dream Team. But Guardiola travelled the world in preparation for his big break and nobody could argue that he is an example that many can easily follow.

Sometimes, emotion can play a key role in someone getting a particular job. Frank Lampard, fortunate to get his first break at Championship promotion-chasers Derby County last season, was subsequently given the Chelsea job in the summer. As well as he did in spurts with the Rams, ultimately losing the play-off final to Aston Villa, he hadn’t done enough to get a Champions League job; it is almost impossible to see him in that role had he not spent 13 years at Stamford Bridge, become their record goalscorer and arguably greatest ever player.

The same goes for Alan Shearer, who was drafted in for eight games by Newcastle United as they stared relegation in the face in 2009. The Magpies hoped their favourite son’s presence would be enough to galvanise a talented, but demotivated squad; he worked hard, but there was ultimately little substance to back up his promise and they went down. Someone who had been managing in the lower leagues after years of education may have been better suited to that situation, but they would never have been given the chance under those very testing circumstances.

Shearer’s case also shows the perils of ex-professionals, certainly well-known ones, actually getting top jobs. When he took over on April Fool’s Day at St James’ Park 11 years ago, it was said he had nothing to lose. If he saved the club, his hero status would be enhanced; if not, then it was too late anyway. While that remains true to an extent, he has not set foot in a dugout since, returning to the Match of the Day studio. He always felt the right fit to manage Newcastle for obvious reasons, but his ill-fated spell is all he has to show. The cruel irony is that while his stature got him the job, it also stands as the reason he has so easily been cast aside.

Managerial failure can be terminal even for the best, but for big-name wannabes it can cause real problems after a first hurdle fall. Gary Neville revolutionised punditry at Sky Sports after retirement in 2011, but as he combined that role with an assistant job with Roy Hodgson and England, it was thought to be only a matter of time before he would go on to become the next great British manager. His chance came at Valencia and lasted four months before he was sacked, having been mercilessly mocked and hung out to dry.

All the reasons for his initial potential remain; he is back at Sky and as insightful as ever, but probably won’t step into the firing line again because he fell from such a position of hype. There is little doubt that someone under a dimmer spotlight could have bounced back from the same failure.

Steven Gerrard and Patrick Vieira, currently in charge of Rangers and Nice respectively, are facing difficult times. Gerrard has done well at Ibrox, but the pressure is growing as Celtic’s dynasty remains unscathed. More is expected of Vieira, too, with his side falling short in the race for Champions League football in Ligue 1. Everything is obviously on hold right now, but there is work to do for both men when football eventually resumes.

Doors opened for them that might have been closed to others, but they could easily be slammed shut forever if these first forays into management see them fall short. Would Liverpool employ a failed Rangers manager? Would Arsenal hire a man sacked by Nice? Mind you, we once thought Manchester United would not appoint a man who took Cardiff down, so what do we know?

Understanding what makes a good manager in the modern game is getting clearer. Playing careers aren’t necessary, and the message is getting through. There is still one exception – when a genuinely elite player wants to get involved, the fanfare around them makes it easier for them to stand out in the recruitment process. Not everyone will be the next Guardiola or Zidane and ultimately, the same reputation that ‘earned’ them a top job can then work against them when the going gets tough.