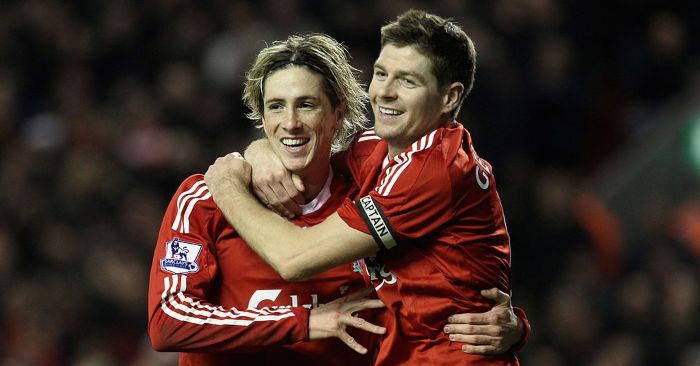 Gerrard formed many a potent union over 17 years in the Liverpool first team – and also played with El-Hadji Diouf a few times.

He believes he was at his best when alongside fellow academy product Michael Owen or former club-record signing Fernando Torres.

Asked on Sky Sports which teammate he shared the best playing relationship with, he said: “I think it would either be out of Michael Owen and Torres.

“I played with Michael when I was quite young. I always knew that Michael was on the same page and the same wavelength. I didn’t use to have to look twice.

Owen: Why Gerrard was on ‘a different level’ to Scholes, Lampard

“I had that same connection with Torres when I moved further up.

“My role with Suarez was different because I was deeper. He had Coutinho and Daniel Sturridge so there was less onus on myself to create.

“Owen and Torres got the best out of me as a No. 8 midfielder.”

“I need Steven in the team, any system, any team, a key player for me and obviously the most important player in that role as a No.10, a little bit in front of Mascherano and Alonso,” the Spaniard said.

“[He’s] the best player I played with, I’ve said that many times. He is the player that completed my game.”