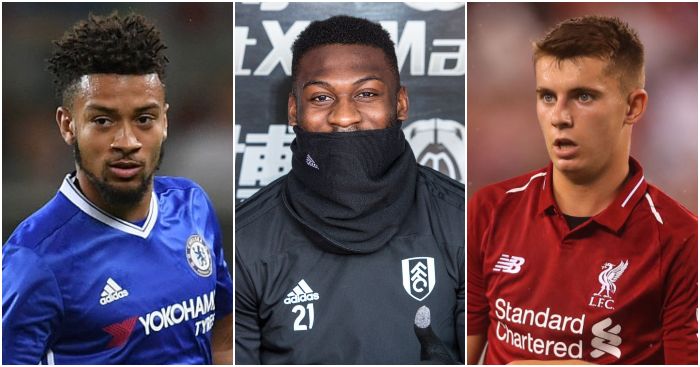 ARSENAL – Krystian Bielik
Last actually played for Arsenal: September 20, 2016, as an 87th-minute substitute for Ainsley Maitland-Niles in a 4-0 League Cup victory over Nottingham Forest. His only other Arsenal appearance came in the same competition in the 2015/16 season, when he was given half an hour as a defensive midfielder in a 3-0 defeat to Sheffield Wednesday.

Last seen: Telling everyone that he “will definitely not return to Arsenal’s U23 team”. Unai Emery must either sell or loan the centre-half, save for realising he is probably better than Shkodran Mustafi. A fine spell with Charlton last season, during which he scored in the League One play-off semi-final, has suitably raised his stock.

Last seen: On loan at Kilmarnock for the past two seasons, having also endured spells with MK Dons and Nottingham Forest. There seems little chance of the 24-year-old spending the final year of his Villa Park contract as a Premier League player – although Dean Smith has called him in for pre-season training.

BOURNEMOUTH – Brad Smith
Last actually played for Bournemouth: In the FA Cup third-round draw with Wigan in January 2018, when he was substituted at half-time. The left-back has still played as many Premier League games for Liverpool as he has for Bournemouth – although the European champions might not activate that buy-back clause.

Last seen: Desperately hoping that Seattle Sounders extend his loan deal into another MLS season. His Cherries contract has a year left to run.

BRIGHTON – Tomer Hemed
Last actually played for Brighton: Thrice in January 2018, but never again thereafter. His last goals for the club were in September 2017, when he scored twice and assisted once in the first two Premier League wins of Brighton’s entire history against West Brom and Newcastle.

BURNLEY – Nahki Wells
Last actually played for Burnley: As an 80th-minute replacement for Johann Berg Gudmundsson in the final game of the 2017/18 season. He has never started for them, because Sean Dyche can’t do transfers.

Last seen: Scoring seven goals and assisting six in 32 Championship starts on loan at QPR, then admitting “I won’t be too disappointed to move on”.

CHELSEA – Michael Hector
Last actually played for Chelsea: Never. Something tells us Frank Lampard’s faith in youth will not extend to a 26-year-old who broke through at Reading instead of Stamford Bridge.

CRYSTAL PALACE – Alexander Sørloth
Last actually played for Crystal Palace: In the FA Cup third-round win over Grimsby. Each of his 12 Premier League appearances of last season came as a substitute. Poor fella.

Last seen: Gent’s technical director noted that “we have to talk about” the striker’s permanent future, with four goals in 19 Jupiler Pro League games probably not enough to tempt them into a deal.

Last seen: Combining a Championship promotion season with a fairly productive few months on loan at Aston Villa and Anderlecht respectively. His chances of returning to the fold under Marco Silva are about as high as Everton recouping most of their £25m outlay.

LEICESTER – Bartosz Kapustka
Last actually played for Leicester: In three FA Cup games and one EFL Trophy fixture, all played between January 10 and February 18, 2017. The Premier League debut is not forthcoming for a player who joined the champions in 2016 for £7.5m on the back of a fine European Championship campaign with Poland.

Last seen: Recovering from a season-ending injury suffered at OH Leuven, his third loan club in as many years. “I will say this: everything depends now on me. I am not written down as a loss there,” he said of Leicester last month after holding frank discussions with Brendan Rodgers over his future.

LIVERPOOL – Ben Woodburn
Last actually played for Liverpool: Against Brighton on the last day of the 2017/18 season. He was given six whole minutes as Mohamed Salah’s replacement before missing the squad for the Champions League final 13 days later.

Last seen: With one of the best views at Anfield as he watched Liverpool beat Barcelona 4-0 from the bench. His last first-team appearance for any club came in November during a Sheffield United loan that suited absolutely none of the involved parties.

MANCHESTER CITY – Mix Diskerud
Last actually played for Manchester City: He never has and, at 28, with his last international cap for the United States coming in 2016, he surely never will. The midfielder signed a four-and-a-half year contract in January 2018 when he joined from sister club New York City in a deal first announced by Umbro.

Last seen: Following a couple of uninspiring loans in Sweden by making a temporary move to South Korea, presumably all while wearing Umbro merchandise.

MANCHESTER UNITED – Timothy Fosu-Mensah
Last actually played for Manchester United: At right-back in one of the youngest starting XIs in Premier League history for the final game of the 2016/17 season.

NEWCASTLE – Rolando Aarons
Last actually played for Newcastle: From the start on the left of a midfield four against Manchester City in December 2017.

NORWICH – James Husband
Last actually played for Norwich: On the opening day of 2018/19, when he was so good at left-back against Birmingham that Daniel Farke decided not to tarnish the moment by ever playing him again.

Last seen: Either spending time at Joey Barton’s Fleetwood or trying to figure out why he, Nelson Oliveira and Ben Marshall are about the only Norwich players not given a shirt number.

SHEFFIELD UNITED – Kean Bryan
Last actually played for Sheffield United: In any competition? He made his only appearance of the season against Barnet in the FA Cup in January. In the league? March 2018. For Oldham. In League One.

Last seen: Taking up full-time employment as Sophie Webster’s boyfriend, and credit to him for that.

Last seen: Being linked with AZ Alkmaar after making what he described as a “big mistake” on loan at Feyenoord. Pushing manager Giovanni van Bronckhorst away after being substituted towards the end of a 2-1 win over Heracles – with the winner scored six minutes after he was replaced – was not the midfielder’s most Clasie move.

TOTTENHAM – Josh Onomah (because it’s impossible to actually forget Vincent Janssen or Georges-Kevin Nkoudou)
Last actually played for Tottenham: In April 2017, when he was given two minutes to impress against Bournemouth. He has played more than 17 minutes of a Premier League match just once: when he was given 45 in that 5-1 defeat to Newcastle in 2016.

Last seen: Checking how long is left on his contract and wincing at the prospect of another two years on the fringes. Another loan is likely, having already spent plenty of time in the Championship with Aston Villa and Sheffield Wednesday.

WATFORD – Marvin Zeegelaar
Last actually played for Watford: He started two of Marco Silva’s first three games in charge in February 2018. Nothing since.

Last seen: Stretching his legs on loan at Udinese, where he started ten league matches for a club that finished 12th in Serie A.

WEST HAM – Jordan Hugill
Last actually played for West Ham: Under David Moyes in March 2018. He joined from Preston for something between £8m and £10m, made three substitute Premier League appearances then returned to his natural level last season

WOLVES – Sylvain Deslandes
Last actually played for Wolves: September 2017, when he was lucky enough to follow up a Championship substitute cameo with a start in the League Cup. Wolves’ third longest-serving current player was signed by Kenny Jackett in June 2015.

Last seen: Having a one-year option in his contract triggered for unknown reasons. It says it all that he spent last season on loan at FC Jumilla, with whom Wolves ended their partnership after the Spanish side were relegated to the fourth tier.