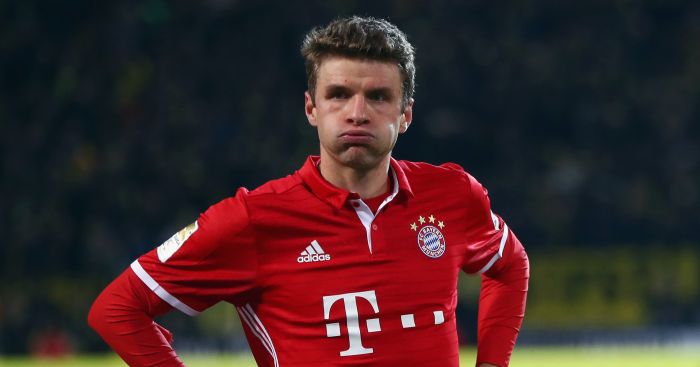 Former Minister President for Bavaria Edmund Stoiber has revealed that Bayern Munich fans would “never forgive” the club’s board members if they sold Thomas Muller to Manchester United.

The German international has only scored three goals in 18 matches so far this season and there has been questions raised as to whether the forward should remain in Carlo Ancelotti’s starting line-up.

Manchester United has been mentioned as a possible destination for a couple of years now and he was again linked with Old Trafford over the summer.

However, Stoiber, who is a member of the club’s hierarchy, reckons it would be seen as unforgiveable to sell a ‘part of the club’s DNA’.

“No one on the Supervisory Board would vote to sell. It should not happen that Thomas Muller plays at Manchester United,” Stoiber told Bild.

Could Bastian Schweinsteiger appear from the start against West Ham tonight?https://t.co/mtZmcZ8CFl

“Muller is the ‘boy next door’. He is the opposite of, for example, Cristiano Ronaldo. He is more than just an excellent footballer. A player like him is part of our DNA. He plays an important role at the club. Muller not only creates emotions with his goals, he talks to the fans hearts.

Bayern allowed Bastian Schweinsteiger to join United in 2015 but Stoiber believes the two situations are not the same.

“When Bastian Schweinsteiger went to Manchester United, the fans were not happy,” added Stoiber. “[But] he’s 32 years old and wanted to experience something new.

“The members and fans, however, would never forgive us if we sell Thomas Muller. No matter how much money.”