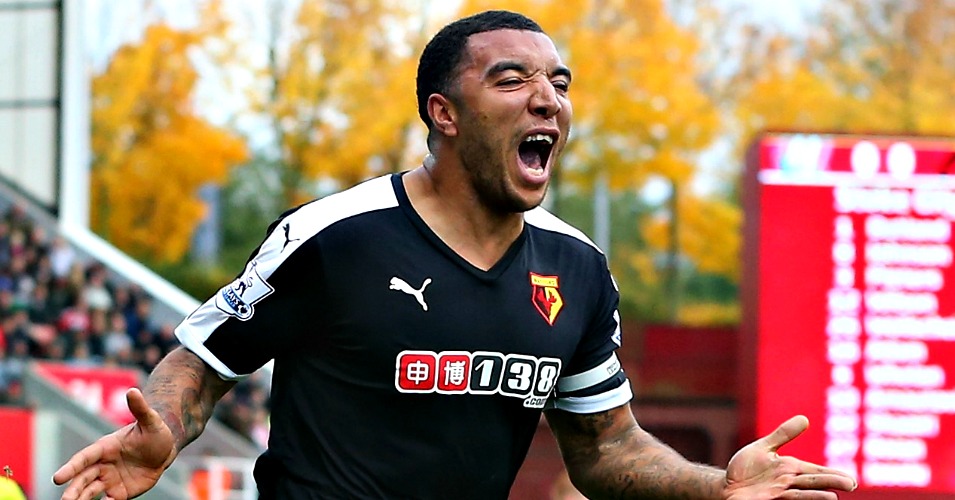 Troy Deeney and Almen Abdi scored their first Premier League goals as Watford held out for a deserved 2-0 win over Stoke.

Hornets skipper Deeney – who netted 21 times in the club’s promotion campaign last term – opened the scoring in the 43rd minute from a flick by fellow forward Odion Ighalo, moments after each player had hit the crossbar just seconds apart.

Abdi wrapped things up in the 69th minute following a mistake by Marc Wilson to spoil Mark Hughes’ 100th game in charge of Stoke, who had gone into the match looking for a fourth straight Barclays Premier League victory.

The result sees Quique Sanchez Flores’ side leapfrog their hosts in the table, moving up to 13th while the Potters slip to 14th.

Deeney almost found himself presented with a great chance in the opening seconds when Geoff Cameron got in a mess near the Stoke goal, but Glen Johnson was on hand to make a cool interception.

Cameron, holding his right thigh, had to come off soon after for Wilson as the home side tried to get a grip on the game.

They managed to boss possession for much of the first half and had several corners but were unable to really threaten, with Marko Arnautovic somewhat summing things up in the 29th minute when he shouldered a decent opportunity over the bar.

Watford then suddenly sprung into life in attack in the 37th minute, hitting the bar twice in quick succession via Ighalo’s header and a shot from Deeney.

They subsequently grabbed the lead when Ighalo bamboozled Wilson as he cleverly flicked Abdi’s pass to Deeney, who took advantage of a Philipp Wollscheid slip to slot in from the edge of the box.

Stoke – who moments earlier had been denied an opener direct from Xherdan Shaqiri’s corner by a near-post Heurelho Gomes save – then had protests that Miguel Britos had handled a cross from the Switzerland winger in front of goal waved away by referee Martin Atkinson.

Watford got a similar reaction from the official after the break as Ighalo and Ikechi Anya looked his way following challenges on them in the area by Wilson and Erik Pieters respectively.

Hughes looked to shake up his attack on the hour by bringing on Peter Crouch and Jonathan Walters for Joselu and Shaqiri.

But it was Watford who found the net soon after as Wilson lost possession to Ighalo and he teed up Abdi, who burst forward and smashed past Jack Butland.

The England goalkeeper then made a good save to keep out an effort from substitute Juan Carlos Paredes, while Walters struck across the face of goal at the other end as Stoke’s hopes faded.