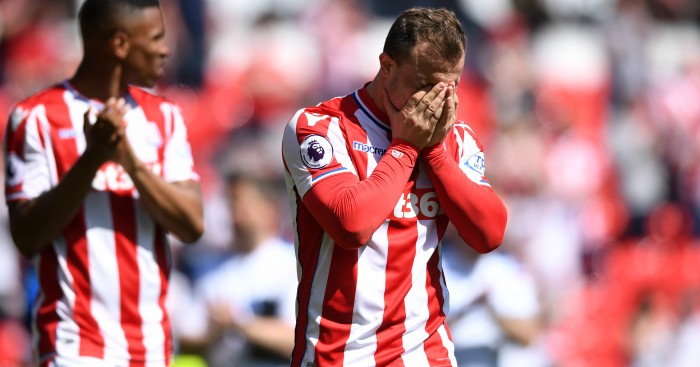 Paul Lambert declared himself “gutted for everybody at the club” after Stoke’s relegation before backing them to “rebuild and be really strong”.

The Potters’ 10-year stay in the Premier League ended as they crashed to a 2-1 home loss to Crystal Palace in Saturday’s lunchtime kick-off, the penultimate game of their dire season.

Stoke had led through Xherdan Shaqiri’s 43rd-minute free-kick, but things turned around in the second half, with James McArthur equalising in the 68th minute and Patrick van Aanholt then netting the winner for Palace in the 86th.

Lambert, who replaced the sacked Mark Hughes as Stoke manager in January, said: “I’m gutted for everybody at the football club, the supporters, everybody.

“It is a brilliant club and it will rebuild and be really strong, no two ways about it.

“I thought the first half of the game we were well in it and got a really top, top goal.

“Second half we never got going, very like the Burnley second half. We’ve had leads and not saw it few in the last few games.”

In their previous home match against Burnley, Stoke drew 1-1 after taking the lead, and they did the same at West Ham in the fixture before that.

Asked why they had not been able to hang on to leads, Lambert, whose side have not won in 13 matches, said: “I think people being anxious and worrying about what might happen.

“But it’s not three games – you go way back to July, August time. That is when your season starts, and if you don’t start right and don’t get a grip of it, you end up in trouble and I think that is what has happened.”

Stoke have scored only eight goals during the 12-game winless run, and Lambert added: “The top end of the pitch, right across it – I don’t think it’s been good enough.

“You can’t fault the guys’ endeavour and workrate and their drive, trying to do it. But you’ve just probably lacked that natural instinct of a goalscorer. I’m talking also about creativity.”

He added: “The football club will (come back fighting next season) because of the support it has behind it.

“The football team should mirror the supporters, the way the fans are. It is an incredible support behind it.

Stoke captain Ryan Shawcross, who inadvertently teed up Van Aanholt’s goal as he intervened a ball from Wilfried Zaha, told Sky Sports: “There are a lot of things we need to change and do better. Ultimately it’s down to the players. We’ve not been good enough all season.

“Since the gaffer has come in we’ve had a right go in every game. For whatever reason we’ve not got the goals we’ve needed and ultimately that’s cost us.

“It’s massively disappointing but it’s a great club and we’ll be back.”