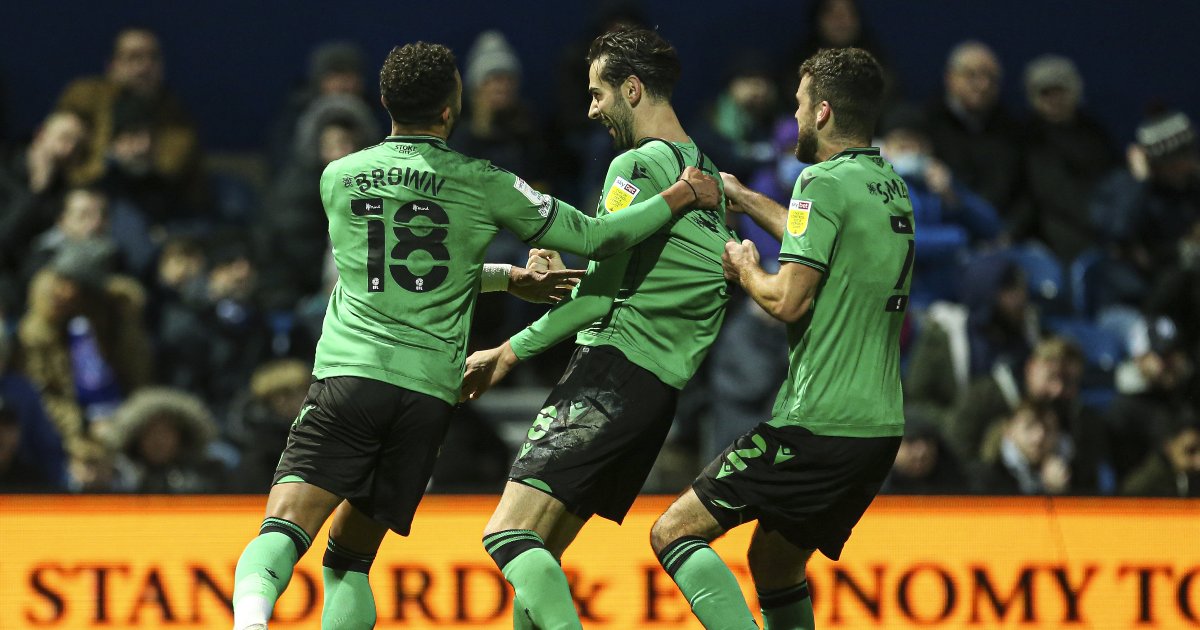 Stoke City
Be it Tyrese Campbell’s glorious goalscoring return to the first-team picture after the best part of a year on the sidelines; be it Mario Vrancic’s transformation from hero to villain and then back again in the space of 90 effortless minutes in a way that only the Bosnian can, or be it Adam Davies’ stellar performance in goal including a penalty save that prevented 1-1, this was the sort of day which reminded us just how good Stoke City can be.

QPR did not look like a team on a high from the dramatic victory that came on Monday night, but much of their muted performance could be put down to one of the most professional victories you are likely to see at this level, save for Vrancic’s WWE audition. That moment of madness, in which the playmaker wrestled Yoann Barbet to the ground in the penalty area, was sandwiched between two moments of class, an inch-perfect pass for Campbell’s opener before a finish every bit as precise as his earlier challenge was clumsy.

A great start to the season had given way somewhat to inconsistent form in recent weeks, but three well-earned points take them to just one place and one point off Sunday’s opponents, and very much back in the play-off picture. When Stoke are good, they are very good. It’s been too long since we’ve seen that.

West Brom
Away at their midlands rivals Coventry, who are objectively having a far better season, West Brom won when it mattered most. Coming into this Saturday lunchtime affair, everything seemed to be going against the Baggies and their beleaguered boss. But this time, Valerien Ismael got it spot on, pressing to gloriously intense and precise measures while taking their chances with aplomb. It has been all too rare a sight for large parts of this campaign.

Having long been touted as very much the third wheel in a two-horse promotion race, recent weeks had seen the Baggies boing boing slightly further south of that top play-off spot. In defeating a potential rival, this could perhaps prove to be a turning point in West Brom’s campaign.

Ben Brereton Diaz (again)
There are dozens of ways in which Ben Brereton Diaz’s excellence for both club and country this season can be measured, and the Chilean’s almost perennial presence in the first half of this column is one way of examining the Blackburn forward’s career-best season and counting.

Since he and Blackburn went down 7-0 to Fulham in the opening game of November, they have won four out of the last five with Brereton Diaz notching in each of the last four. Against local rivals Preston, his header was the ultimate difference as the transition from dark horse play-off chasers evolves into dark horse automatic promotion contenders. Fulham may have had by far the better of Rovers when the two met this time last month, but it is the Diaz-inspired Blackburn who have fared far better since.

Paul Heckingbottom
All hail the new project. Three wins in a row, two under the planned long-term tutelage of Heckingbottom and the new way forward at Bramall Lane, and it’s all beginning to look rosier again in this corner of South Yorkshire.

Fulham and Bournemouth’s promotion credentials
This was never likely to live up to its star billing as a clash between the two best sides in the Championship. For Fulham and Bournemouth however, this was a job well done all round. Both sides came into this clash in the stickiest form of their respective seasons, but neither lost ground on one another nor dropped enough points to worry about the scrambling selection of also-rans beneath them in the table.

The best attack in the division came up against the immoveable force that is the Bournemouth backline, and while neither clean sheets nor high scoring were on the cards, both sides showed in large doses why they sit so highly up the Championship table approaching the halfway mark.

Scott Parker
A draw meant it was now just one win in six for the Cherries, but manager Scott Parker returned to his old stomping ground with a point to prove and largely proved it. He arrived at the Cherries in the summer looking for a second bite to prove he is better than your average British football manager. We had our doubts. But in keeping neck-and-neck pace with his former employers, and despite the sucker punch of Tosin Adarabioyo’s late leveller, Parker is penning his own future and looking increasingly likely to make it two promotions in two Championship seasons with two different clubs. His switch from Fulham to Bournemouth could scarcely have worked out better for all involved so far.

Dominic Solanke
Only opposition talisman Aleksandar Mitrovic and Ben Brereton Diaz can lay claim to having scored more Championship goals this season than Bournemouth scorer Dominic Solanke. The ease with which the Dorset side carved Fulham open within six seconds of the second-half restart was as pleasurable as Solanke’s finish was deadly. Sixteen Championship goals before the halfway mark of the season is a big part of why Bournemouth are so high, even when the wins aren’t quite falling as they were.

Millwall
If there has been one criticism to be legitimately levied at Millwall under Gary Rowett’s tenure, it is their penchant for a draw. No second-tier side drew more than the Lions’ 17 last term, while their nine recorded this term has Rowett’s side on course to go even further. Having failed to win in their last four prior to Birmingham showing up in the capital, with three of those outings being draws, a win was more than welcome; the manner in which it came even more so. One of the most outstanding team performances of Millwall’s season, perhaps even in Rowett’s time at the club thus far, produced the sort of result too rarely witnessed in these parts for the genuine quality at Millwall’s disposal. Find more consistency in victory and the play-offs are very much within reach.

Alex Scott
In yet another Bristol City season passing by without much in the way of incident, young midfielder Alex Scott has provided the brightest of lights at the end of the tunnel. Against basement boys Derby, his early strike was the difference on the scoreline, and a goal that takes the Robins 10 points clear of a bottom three looking ever increasingly and longingly at the batch of sides on the right side of that particular dotted line.

Coventry’s late magic
There haven’t been any Championship sides better than Coventry this season at recovering points from losing positions and providing their supporters and neutrals alike with magical late moments, having combined the two since the opening weekend of the season. Against West Brom, the Sky Blues were second best for much of the contest, not just to the Baggies, but by their own standards too.

Despite halving the deficit with minutes to go, Mark Robins’ side never seriously looked like taking anything from this derby since going behind early in the contest. This time last week, Coventry sat just one point behind the third-placed Baggies. Stoke’s victory on Sunday saw Coventry in unfamiliar territory this campaign, sitting outside the top six. A second wind akin to their comebacks this campaign is now needed to get the season back on track.

Blackpool
No sooner had we started taking Blackpool as legitimate dark horses for a spot in the top six than their form has gone off a cliff. Saturday’s 3-0 home reverse to fellow surprise package Luton Town was perhaps the most disappointing outing of the campaign, and the most disappointing result of Neil Critchley’s time at Bloomfield Road to date.

The Tangerines have started both seasons under their manager in sticky form, but they are finding themselves in very much the opposite of a purple patch once more as we approach the halfway mark of the current campaign. They now sit just two points above bitter rivals Preston, who have been constantly mired in the bottom half this season. There is nothing inherently bad about this; Critchley’s side are higher than where many predicted them to be, but without a victory in the entirety of November, that run of form has now stretched into advent. With four fixtures to come this month against fellow bottom-half outfits, a return to their usual standard is required.

Peterborough United
But for all of Blackpool’s frustrations, they have gone on a winless run from a position of strength. Despite being far superior to the Tangerines in their respective League One promotion campaigns last season, Peterborough United’s bad run of form has been a season-long mire that looks impossible to shake off.

Another outing without finding the back of the net makes it one goal scored in the last seven games. Once Nottingham Forest took the lead against their beleaguered opponents, there was no doubting that all three points were staying by the River Trent. Staggeringly, the Posh are the best placed of the three bottom sides, and yet remain five points off safety with a miracle already needed to make a sophomore season back in the second tier.

Derby County
They had tried so hard to remain positive while the clusterf*ck above them places the entire club in jeopardy, but it finally appears that Derby have run out of steam. The last-minute defeat to QPR would be enough to knock the stuffing out of many a side, but an away trip to Ashton Gate is an evergreen chance of getting back to form. In truth, Derby rarely looked like taking anything back to Pride Park from their Avon visit.