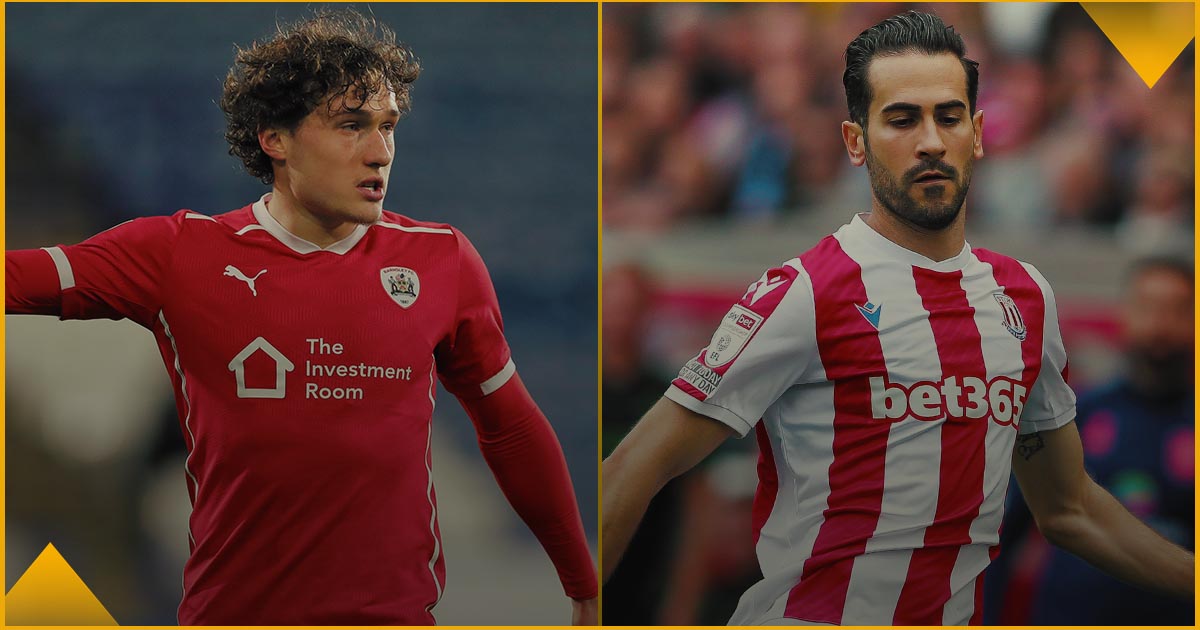 We’ve got more Championship action on our way and Benjamin Bloom has picked out Stoke v Barnsley to look into for his tactical preview.

Setting The Scene – Role Reversal
The Championship is as ever providing plenty of topsy-turvy narratives. No sooner have we processed them that they flip around the other way. For those keeping score, at the end of last season Barnsley were the great overachievers, finishing fifth in thrilling crash bang wallop fashion and losing in the play-offs to Swansea. Stoke were once again the underachievers: despite a decent start, once Tyrece Campbell succumbed to injury the Potters fizzled out and finished a disappointing 14th.

Six games into this season and the narratives have switched again. Stoke cleared a lot of expensive deadwood, recruited nicely and are up in third position having only lost to Fulham thus far. More excitingly for Potters fans, the football seems a little less passive with an extra attacking dimension seemingly in play now. Barnsley are down in 17th place going into this gameweek, a 12-place drop so far from last season, but there is plenty of nuance to go with that very surface-level analysis. The manager, CEO, captain, and star loanee striker are no longer at the club, as Barnsley look to regenerate in season three of this latest Championship run.

I suppose what I’m saying is both clubs are probably closer to where we would traditionally expect them to be on the basis of the last decade or two of their existence. However, as we’re constantly at pains to point out, the Championship makes a mug of tradition, and give it a few months and we might be talking about a totally new narrative for one or both of these two clubs.

One To Watch – Mario Vrancic (Stoke City)
When Mario Vrancic made the switch from Norwich to Stoke this summer a Potters fan in my YouTube comments was particularly triggered to hear me describe him as ‘the type of player Stoke don’t have’. This guy made the mistake many football fans do of taking every comment made about their beloved team negatively – I wasn’t saying Stoke didn’t have good players, or creative players, just none like Vrancic.

The Bosnian is one of those really fun performers who is extremely elegant and skillful, loves a killer through ball and a direct free-kick but perhaps just needs that little bit of help from his team-mates to do some of the more rudimentary footballing tasks. At Norwich, Vrancic was a two-time Championship winner, but for all his silky skills he only started 33 of the club’s 92 games in those two seasons. The fact that the Canaries preferred the less silky but perhaps more rounded likes of Marco Steipermann and Lukas Rupp in a team that dominated possession speaks volumes. Don’t get me wrong, Vrancic can play, and got 25 goal contributions in Norwich’s two promotions, but he was never the main man.

Cliches about wet windy nights aside, I was unsure how Vrancic would fit in at Stoke, but he still stands up as a player that makes things happen. He has started four of six league games, in a midfield three, and has two assists on the board. With four key passes per game he ranks second best in the division. If Vrancic can beat his highest total of 29 Championship starts, and if Stoke can get him on the ball in the opponents’ half, perhaps he can prove important as ‘the type of player Stoke don’t have’.

One To Watch – Aaron Leya Iseka (Barnsley)
Ok, I’m going out on a limb with this one, but could we finally see the full debut of Belgian striker Aaron Leya Iseka on Wednesday night? Iseka was announced on the Barnsley website as having signed way back on August 2, however, home office visa issues have delayed his first Championship start until now. Iseka was on the bench for the weekend trip to Bournemouth, and Barnsley fans got their first look at their ‘new’ signing after he replaced Clarke Odour at half-time.

I’ll be the first to admit that I don’t know too much about Iseka, or indeed his compatriot Obbi Oulare, who also joined up at Oakwell this but is supposedly behind Iseka in the fitness stakes. The truth is Barnsley and new boss Markus Schopp could do with another one of the beautifully innovative signings we’ve seen the past couple of years to give their season a kick start. Iseka seems to have decent calibre; he has appearances and goals in the French top league as well as the Europa League, and is brother of Belgian international Michy Batshuayi.

Most importantly the Barnsley recruitment team have a lot of credit and trust in the bank, whether it be pulling talent from the Austrian Leagues, the USA or Milton Keynes, their transfer performance has been impressive. The Barnsley fans will hope Iseka, who we may see start for the first time, can make an equal impact to those who have gone before him.

Key Battle – Wing-back Wars
This clash gives us another potential edition of wing-back wars, with some very capable wide men and two managers wedded to that team shape. Stoke boss Michael O’Neill has a reputation for a solid defensive base, and although that may have altered somewhat this season, still enjoys springing out from a defensive back five shape. At Barnsley the three at the back and wing-back system has been in place across the previous two managers Gerhard Struber and Valerian Ismael, with Ismael using the wing-backs hugely effectively but at times frighteningly high up the pitch.

Let’s start with the two Barnsley wing-backs who are tried and tested now at Championship level and have both played every minute so far this season. The two Callums, Brittain and Styles, are as a pair among the most consistent in the division, providing everything a modern wing-back should with energy, and a balance of attacking threat and defensive solidity. The only thing getting in the way of the excellent partnership is the ‘on off’ flirtation between Styles and central midfield, he certainly has the ability to move inside, and in the absence of Josh Benson started but didn’t finish there last time out.

At Stoke the wing-backs are Josh Tymon and Tommy Smith. Down the right-hand side Smith famously hit ten assists in Huddersfield’s surprise promotion back in 2017, and already has three more Championship assists to his name this season. On the other side, Josh Tymon was on the scoresheet with perhaps the best example of the tweak of style at Stoke as he finished off a fantastic passing move against Nottingham Forest. As ever in these match-ups if the midfield gets clogged there are four very capable players out wide who could be a difference-maker at either or both ends.

The inside view – Stoke City (David Cowlishaw from the Wizards of Drivel Podcast)
After a narrow win against Huddersfield, this is an opportunity for us to capitalise on our good early season form. While results have been good, we haven’t blown teams away – understandable with the absences of Powell and Campbell.

Our strength has been a solid backline and an increase of quality in midfield – especially the left foot of Mario Vrancic. Optimism is gradually increasing around The Potteries, but September is a big month for us with a series of winnable games so we need to make them count.

Barnsley have struggled, but we’d take another narrow win every day of the week to keep the momentum going.

The inside view – Barnsley (Joe Beardsall from Red All Over)
Barnsley will be or at least should be angry with themselves going into the game against Stoke following a very poor performance by their recent high standards away at Bournemouth. Not only did we lose 3-0, we didn’t lay a glove on the Cherries at all. The lack of fight and desire was the biggest frustration for us Reds fans cos that’s very out of character for this Barnsley team.

That said, there’s a lot of circumstances currently hindering the Reds – a new manager trying to implement his style, visa delays meaning our new signings haven’t been available, and injuries to key players such as Carlton Morris and Mads Anderson so you can understand why we have had a difficult start.

I fully expect a determined and passionate performance from the Reds on Wednesday to make up for Saturday but it won’t be easy considering the amount of quality Stoke have in their ranks. I’m going to be a happy clapper as always and say we will escape with a 1-1 draw which would be a very positive result considering the circumstances.”