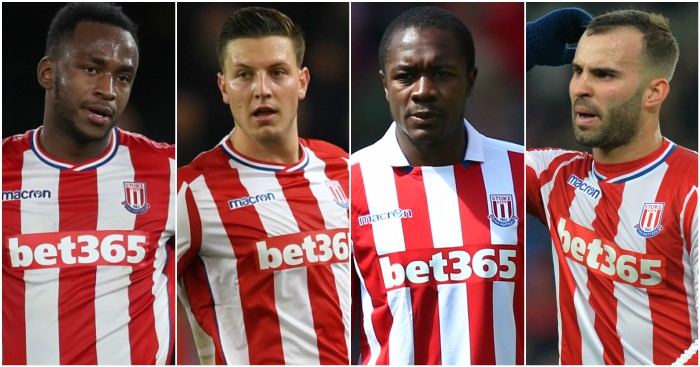 In January 2016, Stoke sat in seventh place in the Premier League, having just drawn 0-0 with Arsenal and beaten Manchester United and Manchester City during the previous month. They were a penalty shoot-out from reaching Wembley after beating Liverpool at Anfield in their semi-final second leg and, just a couple of days later, they broke their transfer record. Which was when it all started to unravel.

Charlie Adam blames an embarrassing lack of discipline, while Jack Butland attributed a large portion of the responsibility for their relegation this weekend to the club’s recruitment programme:

“There have been transfers that aren’t even part of the squad for all kinds of reasons, whether it be discipline, whether it be lack of performance. You’ve got to look at that – what decisions are being made and the type of characters.

“Too many of the recent investments, and over the years, are completely unused and that’s unacceptable. So before anyone is signed and any changes happen that’s got to be looked at because it’s been farcical really.”

Indeed it has. Here are Stoke’s signings since that semi-final second leg:

What was said: “If he is as good as we think he is, he’ll keep his value. You’ve got to think of it from a business point of view. We want him to be worth more than we paid for him.” – Peter Coates

“I would say he is a Patrick Vieira type – a strong and powerful midfielder, a real driving force in there and perfect for the Premier League.” – Charlie Adam.

How it turned out: Shay Given was his team-mate before Imbula was shipped out on loan to Toulouse after a miserable 18 months during which he managed 28 appearances.

“He’s come in from Porto and he’s literally not tried since he’s been there,” the keeper told Off The Ball podcast. “He comes to a different country and doesn’t even learn how to say ‘good morning’ to the rest of the team. Doesn’t want to learn the language, I mean, and doesn’t really want to play at Stoke.”

What was said: “Joe is a player that Mark has admired for a considerable amount of time. Therefore when we became aware of the possibility of bringing him to the club it was something that we were determined to do.” – Tony Scholes.

How it turned out: One of the better big-money signings. Stoke signed Allen after he starred in Wales’ magnificent Euro 2016 campaign and he has contributed 10 goals and 11 assists in 76 appearances over two seasons. If he wants to stay in the Premier League, the Potters should get their money back for the 28-year-old.

What was said: “We are absolutely delighted to have signed a player of Ramadan’s undoubted quality and potential. He’s a special young talent who is excited about the prospect of making an impact in the Premier League and we’re looking forward to giving him that platform.” – Tony Scholes.

How it turned out: Two goals and two assists in 41 Premier League appearances suggests that “undoubted quality and potential” is some way from being realised. The Egypt international, under contract until 2022, is likely to attract interest with clubs in his homeland already being linked, but Sobhi certainly hasn’t made the impact Stoke required.

What was said: “Bringing Wilfried in was a no-brainer for us to be perfectly honest, because he knows the Premier League and has scored plenty of goals at this level. He has power, speed and very good physical attributes which will undoubtedly help us, and his technical and finishing skills are outstanding too. Eighteen months ago he was being bought for a hugely significant amount of money, so we know that we are bringing in a top-quality striker.” – Mark Hughes.

How it turned out: Hughes’ confidence was again misplaced, with Bony scoring two goals (in the same game) in 11 matches before falling to contribute at all during the second half of the season.

What was said: “I am still pinching myself to be honest, because six months ago I wasn’t in a great position in terms of how I felt about the game and where I was in my career.” – Grant.

How it turned out: Plucked from Derby’s reserves initially on a loan deal the previous summer, Stoke made his deal a permanent one after the goalkeeper made such a decent job of standing in for Butland that he won the club’s Player of the Season award last year.

What was said: “We’ve signed a young English striker who has already proven his ability in the Premier League. After a frustrating period he’s now desperately keen to reignite his career and we look forward to seeing him do that with us.” – Tony Scholes.

How it turned out: A record of not a single goal in 30 Potters appearances suggest Berahino would have made little difference had he not been banished to the Under-23s for the last few weeks of Stoke’s relegation fight after turning up late for a reserve game. Has been urged by Paul Lambert “to do the right things off the pitch” and to “help himself”.

What was said: “As a professional he still feels he can enjoy even further success in the game, ambitions that both he and ourselves feel he can fulfil here. He has shown over the past two seasons that his qualities and appetite for the game haven’t diminished in any way, and I believe that his experience and leadership qualities will significantly enhance us.” – Mark Hughes.

How it turned out: The 34-year-old started the first two games of Lambert’s reign after starting every match under Hughes until the ex-manager’s last Premier League match in charge. But Badou Ndiaye’s arrival has seen the experienced former Manchester United midfielder watch most of the run-in from the bench.

What was said: Nothing, except Hull vice chairman Ehab Allam reflected in October: “I don’t think Josh has done himself any favours. I believe it was the wrong move to go to a club where he’s not playing regularly.”

How it turned out: The 18-year-old made three Premier League appearances before Lambert’s arrival, including a start at Chelsea when Hughes accepted defeat long before the 5-0 shallacking had kicked off. Spent the second half of the season at MK Dons, who also suffered relegation.

What was said: “He is a player who has been on my radar for quite some time now. In fact, it was when he played for Hamburg that I first saw him and took note of how good a player he was. I was manager at Manchester City, I think, or Blackburn Rovers at the time and I just remember him making an impression in the game.” – Mark Hughes.

How it turned out: Choupo-Moting actually missed Hamburg’s UEFA Cup clashes with Man City in 2009 and the Bundesliga side never faced Blackburn. But five goals and five assists in 30 Premier League appearances suggest the 29-year-old has made a reasonable fist of filling in for Marco Arnautovic having cost the Potters nothing.

What was said: “We’re delighted. He’s an outstanding player clearly. You don’t sign an extension to your Chelsea contract unless you’re very well thought of. We’ve got a very good player.” – Mark Hughes.

How it turned out: The 23-year-old has been a regular under both Hughes and Lambert, playing 33 Premier League games at centre-half and occasionally at right-back. The French defender will return to Chelsea and have a stab at cracking the first team there.

What was said: “We are delighted to have secured a deal to bring Bruno to the club and I know he feels the same. Bruno loved being with us last season and made no secret of his desire to move here permanently when his loan spell came to an end. We’ve had to be patient in our dealings with Porto, but we’re really pleased with the outcome.” – Tony Scholes

How it turned out: The Dutch defender has missed half the season through injury and looks likely to escape life in the Championship, with Inter Milan looking to pillage the Potters.

What was said: “It is important to have a group of players who are at the right level, and we feel we have that now, especially in defensive positions. I think what people will see and appreciate really early on is Kevin’s quality on the ball and his outstanding range of passing. Of course, he is a big strong guy too, but he possesses a tremendous left foot and is able to play clever and intelligent balls into people’s feet, whether that be through the middle or on angles. He will certainly benefit us for years to come.” – Mark Hughes

How it turned out: Wrong again, Sparky. Stoke’s second most expensive transfer ever didn’t feature at all under Lambert, who put the Austrian on a tailored fitness regime, despite having been a regular during the first half of the season. Of course, Hughes left the worst defence in the division and Wimmer’s consistent presence probably wasn’t a coincidence.

What was said: “In the past we couldn’t get anywhere near this type of player, but now we can. We are actually viewed differently in terms of agents and representatives of this kind of player, we just need an opportunity. They know they can get similar work to what they get at the top clubs, because that’s my background, that’s what I’ve experienced as a player, I know what they need.”

“And clearly they want to know the manager is the one making the decision because he is the guy who is obviously going to pick or not pick them. That is important.” – Mark Hughes

“His pedigree speaks for itself. He hasn’t had the happiest of periods in his career in Paris but he’s still only a young man and is hungry to make a big impression in the Premier League. He will most certainly add to the firepower at our disposal.” – Tony Scholes.

How it turned out: The forward didn’t last the season after one goal in 13 appearances, with the final straw being going AWOL while on compassionate leave to visit his prematurely born son in Spain. Though his son’s mother suggested the striker was “shagging sluts” in nightclubs, rather than playing the doting dad.

What was said: “As soon as I heard of Stoke’s interest I told my manager to make it happen as soon as possible. It’s absolutely great. It’s a surprise because we didn’t have an absolutely successful season in Rubin so it’s a big step forward and I think everyone would be the same if they got an offer from Stoke City.” – Bauer.

How it turned out: After signing a four and a half year deal while the club were between managers, Bauer has started every game but one since arriving, playing at both full-back positions and in left midfield. The Austrian has already stated his intention to stay.

What was said: “He’s a really good left-back and has lots of energy which we need.” – Paul Lambert

How it turned out: The defender made a decent start before a rib injury ruled him out of the last six matches.

What was said: “Badou was a player in great demand but from talking to him it’s clear he always wanted to play in the Premier League and we are delighted he has chosen to fulfil that ambition with Stoke City. We are delighted with the business we have done over the course of this transfer window. All three players we have signed have real pedigree, have played senior international football and will really enhance the options Paul Lambert has within his squad.” – Tony Scholes

How it turned out: A rare success story, though his performances in the second half of the season mean Ndiaye’s stay in Stoke is likely to be brief, with Premier League clubs already looking to raid the Potters for one of their biggest assets. He and Bauer were described by Butland as “two positive signings”.