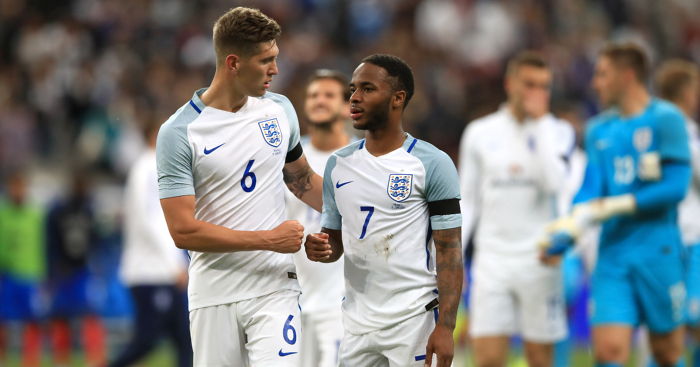 Manchester City defender John Stones believes Raheem Sterling deserved far more credit for his performances at the World Cup and was upset by the negativity aimed at his team-mate.

The 23-year-old could not reproduce his club form, having scored 23 goals last season, at international level in Russia and became the main target for criticism even though England reached the semi-finals.

Stones saw his displays up close and thinks he made more of a contribution than was appreciated, evidenced by the fact Sterling has resumed normal service on his return to Premier League action.

He scored one and had a hand in Kyle Walker’s winner in the 2-1 victory over Newcastle which got City back to winning ways after last weekend’s draw at Wolves.

“Raz was unbelievable in the World Cup,” he said.

“I know he got a lot of negativity towards him but what he brought to the team. He terrorised defences and it got overshadowed.

“On a personal level I was upset for Raheem because what he brings to his team, as we saw with his goal against Newcastle, is immense.

“And it’s not just about goals, he creates chances, takes on his full-back – he does everything right and more and I hope if we do play for England that one goes in and that is that, and we can put it to bed.

“If that happens, he can go on to show the world how good he is.

“He has such a great mentality, to keep coming out every week and doing what he does, and brush it all aside.”

Stones praised Sterling for the way he has handled himself over the last few months.

That includes not only criticism of his on-field displays but the furore over a tattoo of a gun on Sterling’s leg – which has personal significance for a player after seeing his father was shot dead in Jamaica as a boy – which dominated a significant part of the build-up to Russia.

“There was a lot of stuff going on before the World Cup, non-football related which is ridiculous,” added Stones.

“But you can’t let it get to you and Raz is so focused on his football and wanting to do well for the team – and that is the side people don’t see.

“Its an unbelievable quality for any footballer to have, and it makes him a great lad to play with.”

Sterling has picked up where he left off for City last season, scoring his second goal in three appearances.

He struck after just eight minutes after Bernard Mendy capitalised on Jamaal Lascelles’ careless touch to release his team-mate to cut in from the left and curl a shot across Martin Dubravka.

City should have pressed home their dominance of possession as the visitors fought a determined rearguard action but were stung by a counter-attack on the half-hour which saw DeAndre Yedlin charge 60 yards from the halfway line to convert Salomon Rondon’s low cross into the six-yard area.

The hosts upped the pressure after the break and Walker’s first goal for the club, his last coming almost three years ago as a Tottenham player, was worth waiting for as he drilled home a low shot from 25 yards.

Newcastle had Dubravka to thank for preventing that lead being extended, making one particularly good double save from Fernandinho and David Silva.

“We knew it would be a tough game for us, but actually we stood up well and created good moments,” the goalkeeper told nufc.com.

“We played as a team – that’s important – and showed a great attitude, great team spirit, but unfortunately for us we didn’t score one more goal.”