Home Johnny Nic Stop fretting about relegation. Instead, embrace it… 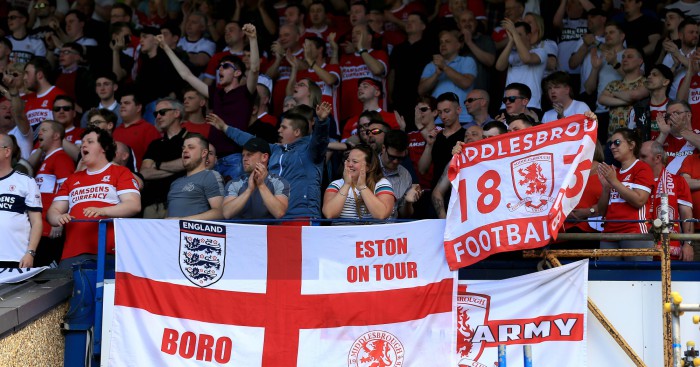 This time last year, my club Middlesbrough were relegated after a season of almost unbearable tedium. As I said at the time, it was blessed relief.

This season has been infinitely more enjoyable. Last year we won five games, this year we’ve won 22. Last season we scored 27 goals, this season we’ve rattled the net 67 times. By any measure whatsoever this campaign, despite being a division lower, has been much more fun than the previous one in the Premier League. And this is why getting relegated is a bogus threat and absolutely nothing at all to be bothered about, if it should happen to your Premier League club. That’s not to say you shouldn’t try to win, or give in, but if you’re not good enough to stay up, don’t over stress it.

To all the Premier League marketeers, let me tell you something: Beating Millwall or Brentford or Bolton this year was far more enjoyable than losing to Manchester City or Liverpool or Arsenal last year, so don’t try and tell us how great it is to go to all these big clubs. It isn’t. It’s joyless. Ask any Boro fan who went to all the away games last season who saw one win, seven draws, 11 defeats and 32 goals conceded.

No fan likes to watch their side be constantly beaten by sides with infinitely more resources. And yet we’re told time and again by people in the game – especially ex-players and journalists – that it is some sort of innately brilliant honour to play in the top flight. Yes, some clubs like Burnley can have an exceptionally good season and fair play to them for that, but even if you do, is it more enjoyable for being in the top flight per se? I maintain winning and playing good football is just enjoyable, no matter what league the team is in.

Why do people like Bates think 10,000 people turned up to watch Lincoln City on Saturday to see them play Yeovil for a play-off place? They’re not doing so out of some sado masochistic tendency. No, they’re loving the football and the results. No fun? You’re really not paying attention if you think what Lincoln fans are doing is not having fun and that somehow fans of West Ham United are, just because they’re in the top flight. But that’s what he’s saying. Top flight: Fun. Out of top flight: No fun. It is unsustainable barfo-nonsense but it is commonly spouted.

Glenn Hoddle said on Saturday night that Stoke fans, in wanting Mark Hughes out, should’ve realised that “you’re not in the entertaining world”. This is a contradiction. The Premier League can’t simultaneously be the greatest league and thus the one that you must stay in, but be full of sides that don’t play entertaining football in order not to get relegated. Those two things are not compatible.

The fear all these people try to induce about relegation is utterly misplaced. Yes, some clubs go down and find it difficult to come back, but so what? That’s not the threat it is regularly portrayed as, because being in the top flight isn’t the be all and end all. It isn’t value for money and it isn’t some sort of holy grail to genuflect in front of.

No-one has a deathless, existential “what’s the point of doing this?” crisis in lower leagues, the way sides that constantly end up 17th to 7th in the Premier League do when merely surviving is the first and only soul-destroying objective.

The only real thing to worry about is if those running the club are financially irresponsible and threaten the club’s very existence. Some do. And why? Because they swallow the ‘best league in the world’ propaganda whole, they splurge too much cash trying to stay in the Premier League (like Sunderland paying Jack Rodwell £70k a week), hypnotised by its supposed glamour and the big money (which price inflation merely evaporates, anyway).

In other words, the threat of relegation is only a threat because of those who over-believe in the value of Premier League status in the first place. These are the same imprudent incontinent cash cretins who sack low paid, minimum wage staff when relegated, but keep on players who earn thousands without doing anything of note. This isn’t an argument in favour of being afraid of relegation, it is an argument for owners and directors to be sensible and stop sucking down all this Premier League propaganda.

The tears shed by some fans on getting relegated are fed by this attitude. Relegation isn’t defeat, it is better seen as adventure. Relegation offers new challenges. It offers new places to go to watch football. It offers the chance of winning a lot more games and having a lot more fun. The warnings that the club might fall apart and be hopeless for a decade is all scaremongering. Even if you do a Sunderland and do a double drop, the potential for better days to lie ahead is far more exciting than knowing it’ll just be endless fight to hang on to 17th in the top division. The likes of Hoddle and all the ‘be careful what you wish for’ brigade don’t seem to understand this for a moment. Non-Premier League football is not a barren wasteland to be scared of. There is the prospect of a dynamic future, not a stagnant one.

Football is all about light and shade, loud and quiet, up and down. It is what gives it interest and texture. Just hanging on “not in the entertaining world” year after year, with your whole purpose being merely to do it all again next year, fundamentally misunderstands the nature of football, the nature of sport and even of the nature life itself.