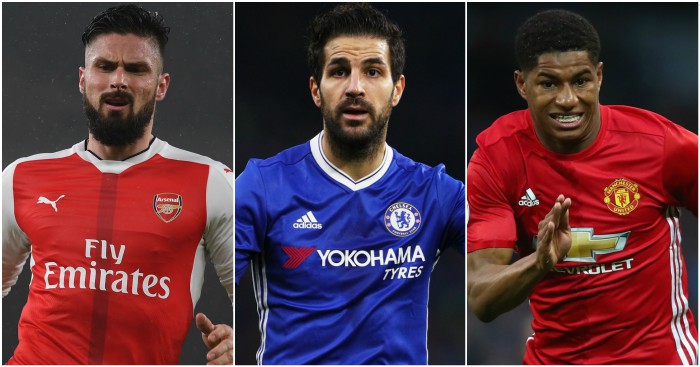 To be eligible, players must have started fewer than half of their club’s Premier League games, without having had a sustained period out through injury…

GK: Sergio Romero (Manchester United)
The Argentina No.1 has made a career out of being a club stand-in, but Jose Mourinho trusts him enough to pick him for the Europa League final. Seems like an unnecessary risk when David de Gea is fit, but in 15 games as their cup keeper, Romero hasn’t let United down this season. Yet.

RB: Kieran Tripper (Tottenham)
The Spurs defender has played second fiddle to Kyle Walker for much of the season but Trippier has done a more-than-adequate job of filling in at either right-back or wing-back. The 26-year-old has contributed three assists – all against Watford – and played in every domestic cup game, as well as all three away games in the Champions League. If Walker leaves this summer, though, would Mauricio Pochettino trust him to step up to first choice? Probably not.

CB: Rob Holding (Arsenal)
The summer buy from Bolton played three games at the start of the season before not getting a sniff of Premier League action until last month, when Arsene Wenger chose to follow the three-at-the-back trend. Since then, Holding’s excellent form has been crucial to the Arsenal’s last-ditch push for the Champions League places, with the Gunners having won all eight of his most recent starts. According to the Arsenal fans at Stoke, he’s ‘better than Cannavaro’…

CB: Ragnar Klavan (Liverpool)
Can you tell it’s slim pickings at centre-back? Be that as it may, Matt Stead threatened actual bodily harm if Klavan wasn’t chosen ahead of John Terry, and never having seen Steady angry, it’s not a risk I’m prepared to take. He’ll never be first choice at Liverpool, but he’s done well enough since joining last summer to earn a place in the Stiffs XI.

LB: Matteo Darmian (Manchester United)
Jack of all trades, master of none, Darmian’s versatility, more than what he offers in any one particular position, has made him a crucial member of Mourinho’s squad. The Italian has played everywhere across the back four, as well as wing-back when Jose dabbled with a three-man defence. With defensive reinforcements arriving in the summer, Darmian is likely to be heading back to Serie A but, if he does, he can hardly be called a flop. Not a raging success either, mind…

CM: Michael Carrick (Manchester United)
For a player so many supposedly don’t rate, United are certainly having trouble replacing him. His legs might be going, not that you would ever notice, but Carrick remains a vital cog in the United machine. Out of contract at the end of the season, the soon-to-be 36-year-old is said to be talking to the club about a dual playing and coaching role, which makes sense for all involved.

CM: Cesc Fabregas (Chelsea)
Antonio Conte admitted earlier in the season to having sleepless nights over Fabregas, but the manager has found a way to get the best out of the Spain midfielder, even if he can’t promise regular minutes. Despite starting only 12 games, the former Arsenal star has recorded 11 assists – one more than Alexis Sanchez – and scored five goals. That’s the same amount as last season, despite starting 21 fewer matches.

LW: Anthony Martial (Manchester United)
It’s Martial or Demarai Gray, and the Frenchman gets the left-wing spot on account of looking like he most needs the boost. It’s hard to decipher whether a cuddle or a kick up the arse is what is required to get the Frenchman firing on all cylinders, but Mourinho is banking on this just being the ‘difficult second season’. Martial has made 17 starts in the Premier League, offering four goals and seven assists, but he is capable of so much more. The fourth Manchester United player in this team and not the last; poor Jose doesn’t have strength in depth, though.

RW: Willian (Chelsea)
Like Fabregas, Willian has found himself edged out of Chelsea’s first XI, and given the form of Pedro and Eden Hazard around Diego Costa he can have few complaints. But, also like Fabregas, the Brazilian has produced when called upon, with seven goals during a season he has made only 14 starts. That number will surely increase next season when Chelsea have the added workload of the Champions League.

CF: Olivier Giroud (Arsenal)
The handsome b*stard isn’t everyone’s cup of tea, but 12 goals in a season during which he’s made only 10 starts is a decent return. Half of those goals have come off the bench in only 89 minutes’ worth of action, with only Adam Le Fondre ever having scored more as a substitute in a Premier League season. Giroud might not be in the top-class bracket of strikers that Arsenal fans think they require, but few can argue with his contribution when called upon.

CF: Marcus Rashford (Manchester United)
The teenager has played second fiddle to Zlatan Ibrahimovic for most of the season, but with the main man crocked, now is Rashford’s time to shine. All season he has been shifted in and out of the team and across the forward line, which should be considered when analysing his output of five goals and one assist in 31 appearances, with half as starts. But the England forward takes it all in his stride and though some doubt whether he will ever be a No.9, the kid is fearless enough to be whatever he wants to be.