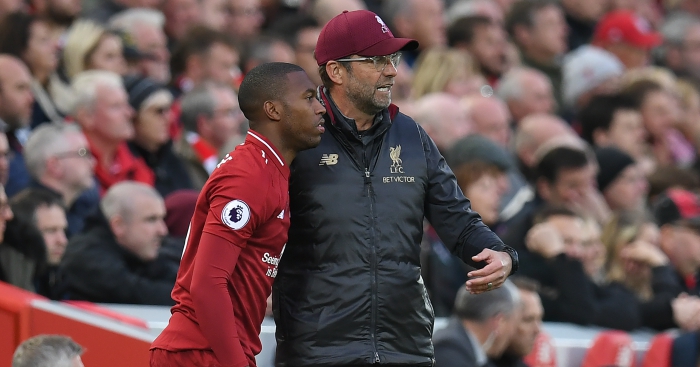 We take a look at each club’s favourite player to come off the bench. When numbers are equal, we opt for the players with the fewer starts who has best embraced their role….

ARSENAL: Danny Welbeck (5 sub apps, 1 start)
Finally awarded his first Premier League start of the season on Sunday at Fulham, Welbeck was hooked after just 62 typically hard-working minutes that did not feature a single shot. But he could hardly complain after his previous five appearances added up to just 55 minutes of football.

BOURNEMOUTH: Lys Mousset (4 sub apps, 0 starts)
Regular F365 readers will know we have something of a fascination with Lys Mousset. Unfortunately for Lys Mousset, Eddie Howe does not have the same fascination and has treated him to just 17 minutes of football this season. Mousset’s problem is that Bournemouth are doing rather well without him.

BRIGHTON: Alireza Jahanbakhsh and Jurgen Locadia (5 sub apps, 1 start)
The two most expensive transfers in Brighton history and neither can get a foothold in a side that still features Solly March and Glenn Murray. Sometimes football makes no sense.

BURNLEY: Ashley Barnes (5 sub apps, 2 starts)
Scored two goals from two shots in 21 minutes against Bournemouth last week to become Burnley’s joint top goalscorer of the season (with two) so started against Huddersfield on Saturday. He was hauled off after 61 minutes in which he completed four passes; Sean Dyche will not make that mistake again.

CARDIFF CITY: Gary Madine (4 sub apps, 0 starts)
A total of 27 minutes in the Premier League without a single shot. Who would ever have predicted that Gary Madine would be out of his depth in the top flight? Yes, that would be all of you/us.

CHELSEA: Ross Barkley (4 sub apps, 3 starts)
His performance against Southampton on Sunday means that he may no longer be Maurizio Sarri’s favourite sub; he was given a chance ahead of the underwhelming Mateo Kovacic and responded with a goal and an assist. That is some way to celebrate a recall to the England set-up.

CRYSTAL PALACE: Alexander Sorloth (7 sub apps, 0 starts)
Poor Alexander Sorloth has still not played the equivalent of a full Premier League game this season. The boy is feeding off substitute scraps, and still looks a bit of a pointless January signing.

EVERTON: Oumar Niasse (4 sub apps, 0 starts)
Remember when it turned out that Ronald Koeman had jettisoned the best striker at Everton? And then he was quite brilliant for ten minutes? Well, he has now reverted to the mean and is confirmed as fourth (or possibly fifth) in the pecking order. Though he did play a full 45 minutes in The Game That Nobody Actually Knew Was Happening against Southampton in the Carabao Cup last week. It did not go well.

The Niasse sub blew my mind. He’s awful. We were controlling the game first half, other than the goal, should have moved Bernard inside and brought Richarlison on for Dowell

HUDDERSFIELD TOWN: Laurent Depoitre (5 sub apps, 3 starts)
Congratulations to the big Belgian for featuring in all eight of Huddersfield’s Premier League games this season and yet managing just one shot on target. We suspect that his run of three starts has now come to a sorry end. As the local paper noted, he is a ‘willing runner’ – which we all know means ‘a bit shit’.

LEICESTER CITY: Marc Albrighton (5 sub apps, 2 starts)
He has at least managed to avoid the full Danny Simpson/Andy King treatment, but the Premier League winner has certainly been sidelined as boss Claude Puel turns to youth and pace. He’s in his tenth straight year of being 28, mind.

LIVERPOOL: Daniel Sturridge (6 sub apps, 0 starts)
Hmmm. You cannot help thinking that Jurgen Klopp is being a tad harsh on Daniel Sturridge, who scored the vital equaliser against Chelsea last week and then had his arse promptly plonked on the bench again. He has played only 43 minutes of Premier League football this season, which was not enough to earn him an England recall.

That Sturridge sub came about 80 minutes too late Jurgen.

MANCHESTER CITY: Gabriel Jesus (5 sub apps, 2 starts)
He was expected to have usurped Sergio Aguero by now but Gabriel Jesus is still largely on the subs’ bench, playing second fiddle to the Argentine. He actually caused Liverpool problems on Sunday but his season has largely been notable for missing a lot of what Opta like to call ‘Big Chances’. Only Callum Wilson has missed more.

MANCHESTER UNITED: Marouane Fellaini (4 sub apps, 4 starts)
One of four United players to feature in every Premier League game this season (the others are David De Gea, Romelu Lukaku and Paul Pogba), he is Jose Mourinho’s – and apparently Pogba’s – favourite Plan B. He has played marginally fewer minutes than Anthony Martial and Marcus Rashford put together this season, which tells you everything but explains nothing.

NEWCASTLE UNITED: Yoshinoro Muto (6 sub apps, 1 start)
“I think it was important for us to have some mobility and pace in attack,” said Rafa Benitez when asked to explain why he thrust the £9.5m Japanese striker into the starting line-up after six appearances from the bench. He rewarded Benitez’s faith with a goal. Huzzah. Then he got injured and it all went awry.

SOUTHAMPTON: Stuart Armstrong and Manolo Gabbiadini (4 sub apps, 1 start)
Italian striker Gabbiadini did at least get a start this weekend; Armstrong has not started since the opening day of the season when he was given 56 whole minutes against Burnley. Mark Hughes’ record is starting to look like a particularly bad joke at the expense of Stoke and Southampton fans.

TOTTENHAM: Erik Lamela (4 sub apps, 0 starts)
The Argentine has started twice in the Champions League against Inter Milan and Barcelona but was bizarrely not trusted against Cardiff until the 72nd minute despite a ridiculous record of two goals and an assist in the equivalent of less than a full game for Spurs in the Premier League. It has to hurt watching Moussa Sissoko bouncing around on the touchline at kick-off. And not just for Erik Lamela.

Love to know how lamela didn’t start that game today

WATFORD: Isaac Success (8 sub apps, 0 starts)
Now that is real success. All hail the only man who has come off the bench in every single game in the Premier League this season. The fact that he is yet to make an even vaguely convincing case for a start ahead of either Troy Deeney or Andre Gray shows laudable commitment to the maintenance of that statistic.

WEST HAM: Robert Snodgrass (5 sub apps, 3 starts)
While Jose Fonte enjoys an Indian summer with Lille after his cold Chinese winter, the other player David Sullivan’s kids begged him not to sign is playing a valuable squad role at West Ham. He was so energetic off the bench against Manchester United that Jose Mourinho urged his players to #bemoreSnodgrass.

WOLVES: Adama Traore (7 sub apps, 0 starts)
When things are going so well for Wolves, it is hard to argue that Adama Traore has been unlucky not to prompt Nuno Santo into at least one change to his starting line-up. But the statistics suggest he has been a tad unlucky.

No, we don’t understand it either, but he is definitely at the top of that graph.

Here are the leaders in Take-on value per 90 minutes in the EPL this season. Adama Traore leads the league so far. #LucidAnalytics pic.twitter.com/vZwadx5Xim