Home Blackburn Rovers Stuck in the middle with Hughes: His six most used 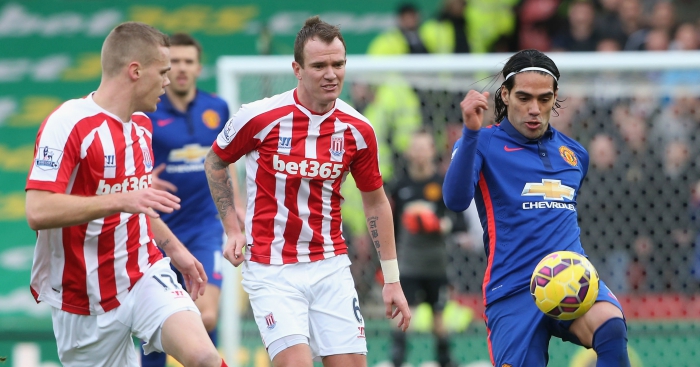 Mark Hughes has been named Southampton manager. This is his sixth Premier League club – only Sam Allardyce (7) has been in charge of more. But who have his trusted lieutenants been over the years?

=6) Geoff Cameron (127 Premier League appearances)
It is not surprising to see this list comprised solely of Stoke and Blackburn players. Mark Hughes oversaw more than two years at both his first and his most recent Premier League club, but never any of his posts in between. He lasted 18 months at Manchester City, and could not even see out the year at either QPR or Fulham.

Just as striking is that of Hughes’ six most-used Premier League players, he actually signed only one. Geoff Cameron was among the hand-me-downs he inherited and subsequently wore as often as possible at the Britannia Stadium, with the American having arrived to little fanfare under Tony Pulis. He missed just one Premier League game in Hughes’ first season, before voicing his wish to play in midfield. It was rarely granted; he featured there on occasion, but was more often than not chosen at right-back.

Cameron’s importance waned slightly due to injuries, and the 32-year-old started just 24 of Hughes’ last 53 Premier League games. “People have been saying ‘Hughes Out’, we know, but no – when you see what he has done for the club he’s a great manager,” the American said in December, imploring the club to “stick together”. The manager was sacked within a month.

=6) Glenn Whelan (127 PL apps)
In their first nine Premier League seasons, Stoke never finished lower than 14th in the table. In their tenth, they are currently 19th. That they are struggling more than ever in their first campaign without Glenn Whelan since 2008 might be a mere coincidence, but it absolutely, definitely isn’t.

Whelan initially had to fight for his place at Stoke under Hughes, eventually ousting Charlie Adam and Marc Wilson as Steven N’Zonzi’s central midfield partner. “I think it might be my best season,” he said of the 2013/14 campaign. “The new manager’s come in and obviously brought a new playing style. I think that’s helped me.”

Hughes repaid the favour last summer. “I always had a high regard for him even before I arrived at Stoke and during my time working with him that never wavered,” said the Welshman upon selling Whelan to Aston Villa for £1million. The 32-year-old has proceeded to aid their promotion bid, all while the Potters battle against relegation from the top flight.

4) Brett Emerton (130 PL apps)
After narrowly missing out on Euro 2004 qualification with Wales, Hughes looked to cut his teeth in Premier League management. He was parachuted in to replace Graeme Souness at former club Blackburn, who had earned just two points in their opening five games.

By Brett Emerton’s admission, Rovers were “in a bit of disarray”, and Hughes hardly made an immediate impact: The new manager won just two of his first 15 games, and the decision to leave the comforts of a low-expectation international post for the pressures of the Premier League looked like a mistake of epic proportions.

Yet Hughes would guide the ship to safety, securing 15th place and a spot in the FA Cup semi-finals. “It is a huge achievement,” Emerton said at the time. “From the day Mark arrived we worked on our fitness.” The Australian would be Hughes’ most-trusted outfield lieutenant until his departure for Manchester City in 2008.

3) Ryan Shawcross (139 PL apps)
Three managers can claim a percentage of the credit for Ryan Shawcross’ 309 career Premier League appearances. Paul Lambert has handed the Stoke captain four games, while he formed the heart of a rugged Tony Pulis defence in 166 matches. His 139 appearances under Hughes sit snugly in the middle.

Shawcross is synonymous with Pulis, yet the finest season of his career came in 2013/14 under the guidance of Hughes. The centre-half was voted Stoke’s Player of the Year after missing just one Premier League game, with the Potters finishing ninth. Manchester City and Newcastle were linked with £12m moves at the time, long before Pulis decided to leave him hilarious voicemails declaring him a “loser”.

2) Brad Friedel (148 PL apps)
“Brad’s one of the best professionals that I’ve come across as a player, and certainly as a manager,” said Hughes of the American goalkeeper in April 2008. “Brad stands comparison to any of the keepers that I was fortunate to play with, such as Peter Schmeichel and Neville Southall. He’s right in the top bracket.”

Friedel has unfortunately not fully embraced the life of the pundit like Schmeichel, nor branched out into skeleton-based musings on social media a la Southall, but he remains a Premier League legend. Only six keepers have kept more clean sheets in the competition, and Hughes set the ball rolling on his record 310 consecutive appearances by handing him the first 152.

1) Erik Pieters (157 PL apps)
And so to the only member of this particular sextet to actually be signed by Hughes. Erik Pieters was Stoke’s most expensive purchase in the summer of 2013 as the club made its first tentative steps into a post-Pulis world. That he cost just £3m illustrates how well Hughes initially did at the Britannia Stadium.

In total, Pieters missed just 17 of a possible 174 Premier League games under the watchful eye of Hughes, who merely said the Dutchman would offer Stoke “other options” at his unveiling. “We need good quality in our starting eleven and good quality back-up for all areas, which Erik will certainly give us defensively,” said the manager.

Talk of providing “quality back-up” betrays the way Pieters subsequently established himself in the first team: the ordinary player was certainly cherished by an ordinary manager.