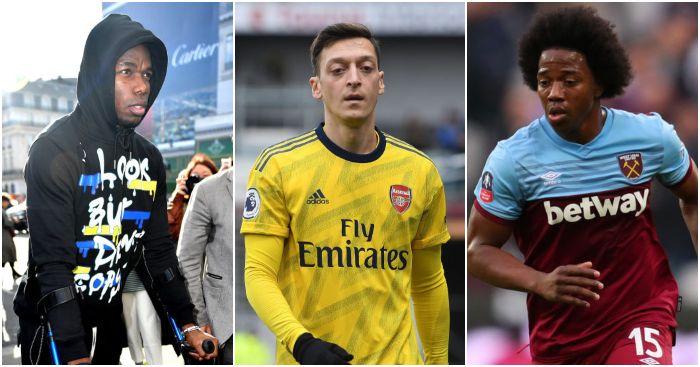 ARSENAL: Mesut Ozil
Apparently, Mesut Ozil was the subject of an offer from a club in Qatar which would have seen Arsenal relieved of the burden of his massive salary. The Mirror says Ozil was prepared to listen and Arteta was willing to approve the German’s exit. But the gossip says that Arsenal pulled out of the deal. Ozil then played at Burnley on Sunday and was withdrawn after 63 ineffective minutes.

ASTON VILLA: Henri Lansbury
The Daily Telegraph said in January that Villa were ‘open to offers’ for Lansbury, but the midfielder’s wages would put off most clubs in the Championship. So a player with just two Premier League starts this season (both defeats) is still at the club and still kicking his heels on the bench.

BOURNEMOUTH: Jordon Ibe
The dirtiest fix of Bournemouth’s Liverpool addiction, the £15m winger is coasting towards his free transfer this summer, having not played – or even been on the bench – in the Premier League since August. There was some talk of late interest from Crystal Palace on deadline day but it came to nought.

BRIGHTON: Ezequiel Schelotto
The one-time (literally) Italian international spent last season on loan to Verona and January being linked with Aston Villa and Cagliari, but right-back Schelotto somehow remains. And Brighton fans were eventually glad of that fact when he came off the bench at West Ham on Saturday to help rescue a draw.

BURNLEY: Ben Gibson
Poor Ben Gibson. There was interest from Watford in the £15m man but Burnley rebuffed their advances, reluctant to boost a potential relegation rival for the sake of a loan deal. So Gibson remains, without a single minute in the Premier League this season as Sean Dyche refuses to look beyond old-stagers James Tarkowski and Ben Mee.

CHELSEA: Olivier Giroud
He was happy to leave for just about anywhere but Newcastle after only two Premier League starts in the first half of the season, but Chelsea blocked the move after failing to land a replacement. But a penny for the thoughts of the Frenchman as he was once again omitted from the match-day squad at the weekend.

It is an insult to Olivier Giroud, one of the world’s best target men, to talk about how “professional” he’s been & block him from leaving one day, to not including him in your 18-man squad the following day & finish a game you’re not winning with a winger as a striker instead.

CRYSTAL PALACE: Christian Benteke
Aston Villa were reportedly offered the big Belgian on loan last month but wages of £125,000 a week prompted the Midlands club to look elsewhere. So Benteke is still a Palace player – ten months after his last Premier League goal – and even started against Sheffield United on Saturday in the absence of loan man Cenk Tosun. He did not score.

EVERTON: Oumar Niasse
He reportedly turned down Derby, while alleged interest from Burnley proved to be idle paper talk; the Senegalese striker will now leave this summer on a free transfer and is unlikely to add to his 19 minutes of Premier League football this season. Oddly, Carlo Ancelotti favours Dominic Calvert-Lewin, Richarlison and Moise Kean.

LEICESTER CITY: Nampalys Mendy
Just as he was busy reminding the world of his existence – in the absence of Wildred Ndidi and just in time for the January transfer window – poor Papy Mendy got struck down by an injury that will keep him off the pitch until late February, and at Leicester until the summer.

LIVERPOOL: Xherdan Shaqiri
The Swiss midfielder is probably fine with sticking around and claiming a Premier League medal, but the idea of first-team football with either Roma or Sevilla might also have appealed; he would have got the medal anyway. Instead, Liverpool stuck a NOT FOR SALE sign on their whole squad and Shaqiri faces a battle against injury and fierce competition to add to his 174 Premier League minutes this season.

Klopp on Shaqiri: In the majority of December we had the bench full of kids, wonderful kids but kids. So how can we think of selling anybody? We have to keep them for sorting our situation, not situation of other clubs. No intention from our side to do anything.

MANCHESTER CITY: Leroy Sane
He doesn’t want to be at Manchester City (Bayern is calling) and while he has lost practically a whole season to injury – leaving Raheem Sterling to run himself into the ground – City have lost a lot of money from his transfer value as he edges into the last 18 months of his contract. “The last info I had was that we made him an offer a long time ago and all the time he didn’t reject it, so after that I don’t have any news,” said Pep Guardiola last week.

MANCHESTER UNITED: Paul Pogba
Like most exes, Manchester United and Paul Pogba should never have bumped uglies again. As tempting as it is when someone familiar slides into your DMs, it’s pretty much always wise to delete the conversation and just join Real Madrid or stay at Juventus instead. Both will be trying to persuade United to sell for less than £100m this summer.

NEWCASTLE UNITED: Henri Saivet
“Saivet, nothing’s really happened – he’s available and he needs to go and play somewhere,” said Steve Bruce last week. While fellow midfielder Ki Sung-yueng left in search of first-team football, Saivet decided to simply wait. He is used to it; the last of his eight games for Newcastle came just over two years ago. They lost 3-0.

It’s 2020 and Steve McClaren signing Henri Saivet is still a Newcastle United player. He has played eight games for them and is not out on loan.

NORWICH CITY: Moritz Leitner
Two years ago the German Under-21 international arrived on loan from Augsburg and those initial six months led to a permanent deal that saw him thrive in the Championship. But in January 2020, Leitner was once again reportedly available for loan after being sidelined from Premier League duty since October. He went nowhere and must now wait until the summer.

SOUTHAMPTON: Che Adams
Leeds pushed and pushed and pushed for Che Adams in January but Southampton turned down a substantial loan fee and a proposed £20m permanent deal to keep hold of a striker who is yet to score a Premier League goal in 19 games. He is at least still part of Ralph Hasenhuttl’s plans, getting 20 minutes from the bench at Liverpool on Saturday.

TOTTENHAM – Victor Wanyama
Tottenham tried desperately to get him out of the door – exciting Celtic fans by telling anybody who would listen that the Kenyan was available for a fraction of his £65,000-a-week wages – but there were no concrete offers. So Spurs are reportedly looking at options to terminate his contract as he is very much not in the plans of Jose Mourinho, who has used him for just nine minutes of a dead rubber against Bayern Munich.

Why Wanyama is still a spurs player is beyond ridiculous. Can’t get in a match day squad and we still can’t move him on. #thfc

WATFORD: Isaac Success
Despite being available for loan – with Anderlecht, Huddersfield and Cardiff all credited with interest – the Nigerian attacker began February still a Watford player, and was even given 15 minutes as the Hornets contrived to make a right cock of things against Everton. It might be his last 15 minutes.

WEST HAM: Carlos Sanchez
A truly awful Manuel Pellegrini signing, Sanchez had clubs queuing up to take him on loan in January – with Spanish side Leganes apparently pushing hardest – but the Colombian decided to stay and ‘fight’ for his place at West Ham. It’s fair to say that he losing that fight, having started just one Premier League game this season and being substituted at half-time of FA Cup defeat to West Brom.

Good news: Carlos Sanchez will be staying at West Ham until the end of the season.

WOLVES: Phil Ofosu-Ayeh
He has never played for Wolves. He will never play for Wolves. He has spent the entirety of his three-year contract either injured or on loan. We sometimes suspect he only actually exists in these features.