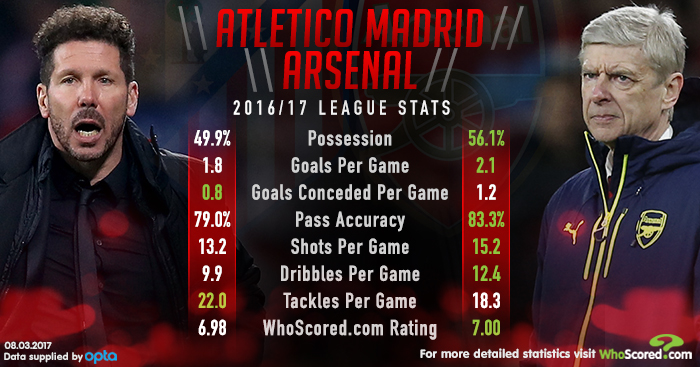 And so it came to pass as Arsenal crashed out of the Champions League with nothing but a faint whimper. The 5-1 loss in Munich was too mountainous to overcome and their inevitable limp exit from Europe’s elite club competition only saw #WengerOut tweeted all the more vigourously by the club’s fanbase.

It remains to be seen whether the Frenchman is in charge at the Emirates next season, but if not, WhoScored.com have run through the possible replacements…

Massimiliano Allegri (Juventus)
“I repeat what I have said before, it’s not true,” Massimiliano ‘Max’ Allegri said following Juventus’ 1-1 draw with Udinese on reports once again linking him with the Arsenal hotseat. Oh Max, those rumours won’t die down any time soon.

The 49-year-old has been at the Juventus helm since Antonio Conte parted ways with the Old Lady and is contracted to the J Stadium until 2018. That’s unlikely to dampen the reports suggesting Arsenal will move for Allegri in the summer and they have the necessary funds to coax him to London. Juventus have shipped just 62 league goals in the 103 matches Allegri has overseen – Arsenal have conceded half that return just this season – and it’s his rigorous defensive discipline that would appeal to the Gunners.

Eddie Howe (Bournemouth)
Perhaps a surprise suggestion in the running to succeed Wenger, Eddie Howe has worked wonders in his second stint as Bournemouth boss. However, only Swansea (59) and Hull (53) have conceded more goals than the Cherries (52) in the Premier League this season, with their defensive deficiencies routinely exposed. Howe may favour a more aesthetic style of football, but Bournemouth’s soft underbelly is often exposed and is an area that needs to be improved upon. At 39 years of age, he has a long managerial career ahead of him, but any possible move to Arsenal would come too soon for Howe, who is still very much in his infancy as a football manager.

Jogi Loew (Germany)
By the time Jogi Loew’s current Germany contract runs out in 2020, the 57-year-old will have been out of club management for the best part of 16 years. Originally appointed as Jurgen Klinsmann’s assistant in 2004, Loew succeeded his compatriot in 2006 and has guided Germany to the World Cup and fared well in the European Championship. That being said, he hasn’t managed in one of Europe’s top five leagues since 1998 with VfB Stuttgart, though mustered a respectable 1.66 points per game during his time in charge. That would unlikely be enough to earn the trophies Arsenal fans crave and with such a long time out of football, Loew is probably one to avoid if the club look to replace Wenger.

Thomas Tuchel (Borussia Dortmund)
Borussia Dortmund may be faltering in the Bundesliga, now 13 points behind league leaders Bayern Munich, but Thomas Tuchel is assembling one of the finest young squads in Europe and has earned widespread admirers since his 2015 appointment. Given the array of talent at his disposal on either flank, it’s little wonder Dortmund are averaging the most dribbles per game (12.3) in the Bundesliga this season and it’s this exciting style that would appeal to Arsenal supporters. His Dortmund side may need to be improved upon defensively, but given the choice, Tuchel is perhaps the fans’ favourite to take over the reins at the Emirates if Wenger is given his marching orders.

Diego Simeone (Atletico Madrid)
If Arsenal are prepared to inject some fight and dogged determination into the ranks, then they could do a lot worse than try to coax Diego Simeone to the Emirates. The Argentine is tipped to be on his way out of Atletico Madrid at the end of the season, even if the club are hoping to see him lead the team out in their debut campaign at their new stadium. While Inter has been mooted as a possible destination, Arsenal fans would surely jump at the chance to see Simeone take over the reins in north London.

While Los Colchoneros have stuttered in La Liga this season, they rank fourth for tackles per game (22) in Spain’s top tier this term, while one of the club’s statistically calculated WhoScored.com’s strengths – protecting a lead – just happens to be a weakness for Arsenal. Simeone’s aggressive approach to management would be a welcome change for the Gunners, who have been accused of lacking fight for many years.

Ralph Hasenhuttl (RB Leipzig)
The Bundesliga’s surprise package this season, RB Leipzig are currently second in Germany’s top tier with manager Ralph Hasenhuttl continuing to earn plaudits. Having taken Ingolstadt from bottom of 2. Bundesliga midway through the 2013/14 season to mid-table in the Bundesliga last term, Hasenhuttl is deserving of the recognition as he oversees a side that is very much exceeding expectations in their debut Bundesliga season. Given the average age of the squad is just 24.2 years, it’s all the more commendable, with the 49-year-old manager welding together a tight-knit squad capable of success this term. RB Leipzig have scored the fourth most goals (43) and conceded the second fewest (24) in the Bundesliga this season, with Hasenhuttl finding the right balance between defence and attack. He would perhaps be a left-field choice, but he’s proving his credentials week in, week out in Germany.

Ronald Koeman (Everton)
Reports last week suggested Barcelona and Arsenal were leading the race to lure Ronald Koeman away from Everton, with the former perhaps in pole position considering his time in Spain and Luis Enrique’s confirmation he was to leave Camp Nou in the summer. With Premier League experience under his belt, there is good reason why the Gunners have been linked with a move for Koeman as a Wenger replacement. While the Toffees have been something of a mixed bag under the Dutchman this season, Everton are currently seventh in the Premier League, just five points off Manchester United and six behind Arsenal, albeit having played a game more. Yet with two of Everton’s defensive strengths countering Arsenal weaknesses, Koeman would perhaps be the safer option for the Gunners.