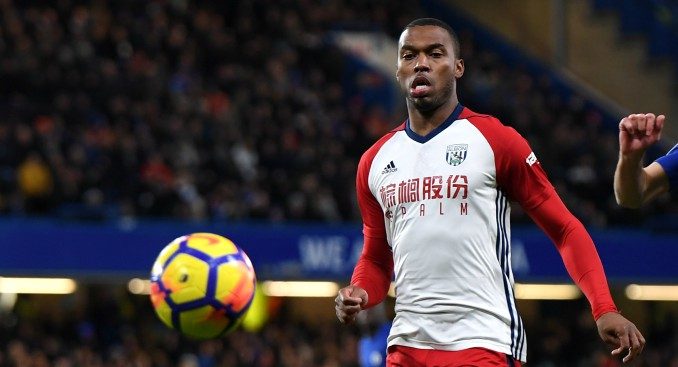 Daniel Sturridge could make his return from injury when West Brom travel to Old Trafford to face Manchester United on Sunday.

The striker was signed on loan from Liverpool during the winter transfer window by former boss Alan Pardew in the hope he might provide the goals to save the club from relegation.

It has not turned out that way, and if results elsewhere go against West Brom this weekend a defeat to United could see them go down.

Sturridge has been sidelined since suffering a hamstring injury against Chelsea on February 12 in what was only his third appearance for West Brom.

In his absence, Albion have lurched to defeat after defeat and are currently bottom of the Premier League table and 10 points from safety.

But Sturridge could be involved against United, while midfielders Nacer Chadli and Sam Field might also return to the squad.

“Daniel is back in training and he’s been working incredibly hard on his fitness levels and everything else,” said caretaker manager Darren Moore.

“He’s a good player and he’ll be a good addition to the squad, we will see how he gets on.

“All three players are now back in training, which is excellent for us. I am delighted to have them back as it’s always good to have additions to the squad.

“All three are quality players and players we respect highly and we will see how they train over the next couple of days. It is possible they could be part of the squad.”

“I think that was important to do,” Moore said. “For me and for the football club it was important we got a performance, which I feel we got, and a result to stop the consecutive losses. So it was positive.

“We tried to win the game, we felt we should have won the game, but we didn’t get the three points, although we didn’t lose the game either so it was a positive.”

Moore insists West Brom will be playing for more than just pride at Old Trafford and he has challenged his players to show some spirit in the club’s dire situation.

“We’ll keep fighting, we’ll keep planning and preparing as best as we possibly can and remain focused,” said Moore.

“The supporters and everybody connected with the football club would expect that from us and that is exactly what they are going to get.”