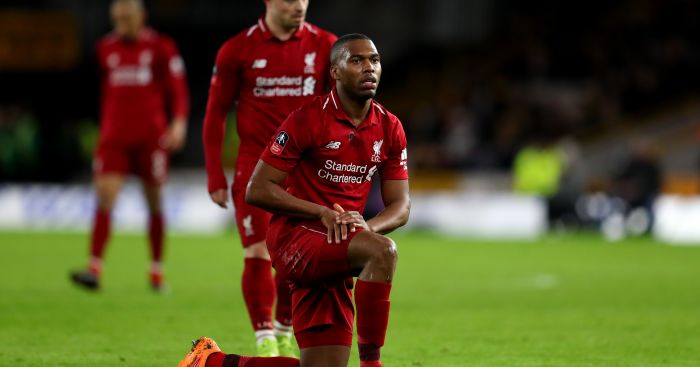 Daniel Sturridge is considering his options amid offers from Major League Soccer and Liverpool’s failure to offer him a new contract.

The England striker is now eligible to discuss a potential free transfer move overseas with his contract at Anfield now entering the final six months.

The Reds could yet offer Sturridge, who has made 18 appearances this season, scoring four times, a new contract, but at 29 years of age, he knows this could be his final chance to maximise his earning potential.

And according to The Sun, a plethora of American clubs are plotting moves for the former Chelsea and Manchester City man amid growing talk the player is open to a switch overseas to revive his career.

The striker has fallen a long way down Jurgen Klopp’s pecking order at Liverpool, having started just two Premier League matches this season, and could even come under the radar of Chinese clubs.

But with the USA said to be the preferred destination for Sturridge, the paper has suggested a move to New York City FC – as a replacement for David Villa – looks most likely.

And with Liverpool already said to be considering replacements for Sturridge, it seems the player’s time at Anfield is set to draw to a close with the striker ready to discuss a potentially lucrative move.

Liverpool are reportedly looking to Germany and Austria for a potential replacement with the likes of Timo Werner of RB Leipzig and Red Bull Salzburg striker Munas Dabbur both coming under the Reds’ radar in recent weeks.

Sturridge is unlikely to be the only departure at Anfield this summer, with Alberto Moreno likely to head back to LaLiga or move to France on a free transfer, while a decision is also likely to be made over Divock Origi, who could have his pick from a number of Premier League suitors.