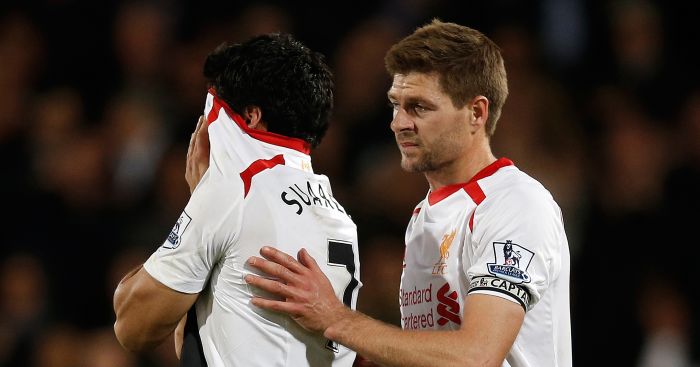 Luis Suarez has revealed that Steven Gerrard’s “words” convinced him to reject a move to Arsenal and remain at Liverpool.

Understanding a bid of £40million would activate a release clause in Suarez’s contract, the Gunners reportedly made a cheeky offer of £40,000,001 in an attempt to sign the forward in the summer of 2013.

Suarez stayed put but would eventually leave for Barcelona a year later after Liverpool narrowly missed out winning the Premier League title to Manchester City.

And now the Uruguay international has revealed that he took on board advice from former Liverpool captain Gerrard as he made his decision to reject the north Londoners.

“We qualified for the UEFA Europa League but the season ended badly,” Suarez told Otro.

“I’m about to go to Arsenal, forcing myself to go, and Steven tells me ‘I promise that if you stay this year you’re going to take off and next year you’ll go to Bayern, Barcelona, Real Madrid or whichever one you want, but stay this year because you won’t be better off at Arsenal’.”

“This was the last conversation I had with Gerrard at that moment and I told my agent that I had made my decision and I was staying.

“His words convinced me in that moment. They came from a person who cared for me, who wanted my well-being, who saw me suffer during training and saw me sad.

“They were words from a true captain that had an impact in that moment and helped me a lot.”