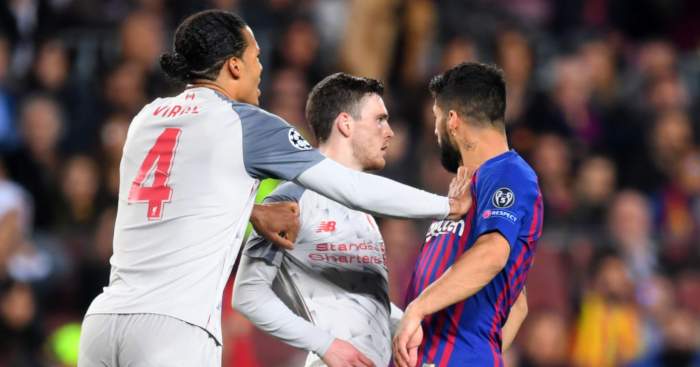 Tempers flared in Liverpool’s 3-0 loss to Barcelona in the Champions League semi-final first leg at the Camp Nou as Luis Suarez and Andy Robertson were involved in a tunnel “spat” at half-time.

Lionel Messi struck twice in the last 15 minutes to turn a one-goal deficit – after Suarez’s first-half strike – into an almost insurmountable task for the Reds at Anfield next week.

Jurgen Klopp’s side were denied an important away goal with Roberto Firmino’s shot cleared off the line and Mohamed Salah’s follow-up smashing against a post.

After Suarez has scored the opening goal, the Uruguayan and Robertson were seen exchanging heated words and it is understood to have continued down in the tunnel at half-time.

Michael Owen, who was a pundit for the match on BT Sport, saw the events unfold, he said: “There was still a bit of a commotion there, walking up the tunnel at half-time.

“Suarez having a bit of a go at Robertson, continuing that spat that there was in the first half.”