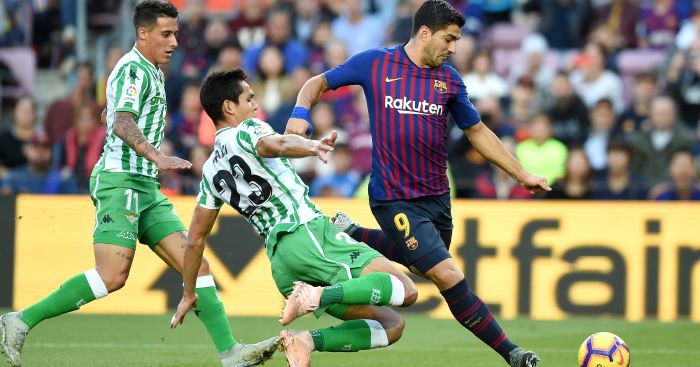 Luis Suarez was involved in a heated exchange with Gerard Pique following Barcelona’s 4-3 defeat to Real Betis in La Liga on Sunday.

Betis took a two-goal lead through Junior Firpo and Joaquin before Lionel Messi reduced the deficit from the penalty spot on 68 minutes.

However, only three minutes later Betis restored their two-goal advantage at the Camp Nou through Giovani Lo Celso.

Barca got two more back through Arturo Vidal and Messi either side of Sergio Canales’ goal for the visitors as Ernesto Valderde’s side lost.

“Now you’re going to f*** me for a pass, do not f*** with me,” Suarez was caught saying to Pique on Spanish television channel Movistar as the players gathered on the penalty circle after the loss.

And Pique handled the situation by simply saying: “Well, that’s it.”

That wasn’t all that was picked up, as Pique was seen talking to Arturo Vidal after a mix-up between the pair cost the La Liga leaders a chance near the end.