Home Chelsea Suits you Sir; Hazard gets freedom of London 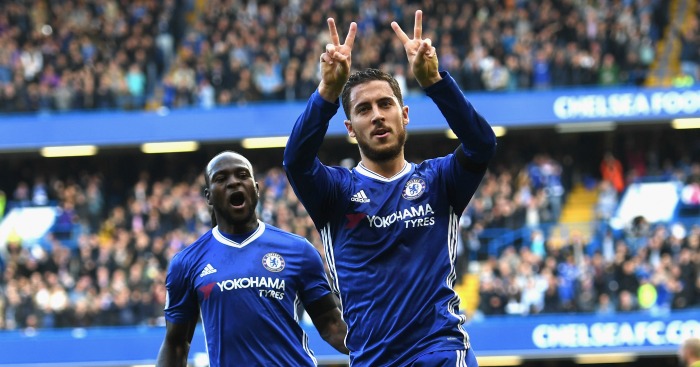 Not just for you, Eden, but the change implemented to solve Chelsea’s obvious problems in defence has delivered a wonderful bonus for Eden Hazard: The freedom to abandon his post on the left touchline and operate pretty much anywhere in the opposition half. Wander, probe, search for weaknesses. In short, enjoy yourself. The result is that the Belgian is again in the kind of form that won Chelsea the Premier League title.

Whether you use heatmaps, touch maps or simply trust the evidence of your own eyes, Hazard – though nominally the left-sided of two attacking midfielders – clearly has a licence to roam in this 3-4-3 formation. With Marcos Alonso working byline to byline as a left wing-back and Nemanja Matic and N’Golo Kante covering central areas, Hazard and Pedro can buzz in, around and beyond Diego Costa to create the kind of movement that baffles middling Premier League defenders.

Just look at Hazard’s goal. Though Leicester’s bizarrely disastrous defending and a prone Pedro rattling the ball into the head of Hazard give it an air of comedy, both attacking midfielders were a) central and b) ahead of Costa.  “I play on the left hand side and I try to do the best I can,” said Hazard this week, but we are withholding sympathy; the tactical shackles of last season have clearly been cast aside.  Astonishingly, his average position at the end of 90 minutes was way beyond Costa.

44 – Since his debut in August 2012, Eden Hazard has scored more PL goals than any other midfielder in the competition. Menace.

Antonio Conte may be frustrated by the low-key signings Chelsea delivered this summer but in trying to compensate for deficiencies in his existing defence (height, pace and concentration are all absent and incorrect), he has – inadvertently or otherwise – produced the perfect platform for Hazard and Pedro. And the synergy does not end there; Nemanja Matic and N’Golo Kante both look more comfortable in a midfield pair, Victor Moses’ limitations become his strength in a wing-back role, and Costa is reaping the benefits of opposition centre-halves worrying about more than not letting him goal-side.

It is a formation that had looked promising against Hull, but delivered the season’s best performance against Leicester. The unabashed rottenness of the champions played its part, but Chelsea looked organised in defence, powerful in midfield, pacey on the wings and fluid in attack. Key to this was the movement of Hazard, making a mockery of midweek reports that he has ‘failed to convince Conte of his reliability’. The one thing you don’t need from your No. 10 is ‘reliability’; you want creativity, trickery and movement and all those were there in abundance against Leicester.

“A coach is like a tailor who must find the system that’s best for his players,” said Conte after the match. Well this suit looks made to measure for one of the Premier League’s most talented players. He may dress to the left but he is clearly enjoying the freedom of going commando.