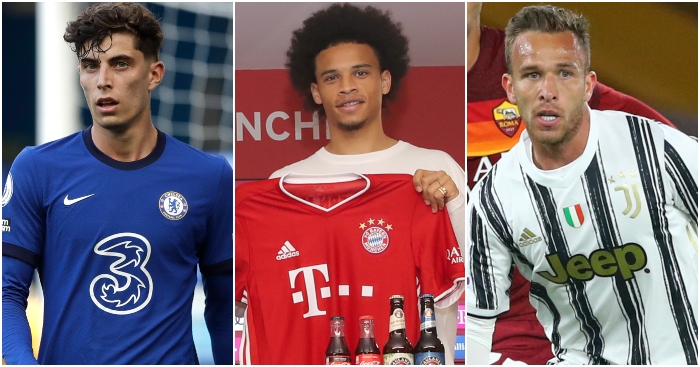 Here are the ten leagues which spent the highest amount in the summer transfer window. All figures taken from the wonderful transfermarkt. Only top-tier leagues included…

Most expensive purchases: Kai Havertz (£72m, Chelsea), Ruben Dias (£61.2m, Manchester City), Timo Werner (£47.7m, Chelsea)
Despite spending almost double the amount on players than any other league in Europe, the Premier League’s £1.26million outlay was the lowest of any summer since 2015. Indeed, this year’s spend is down £350million compared to last summer. But it was still around equal to Ligue 1, La Liga, Bundesliga, Liga NOS and Russian Premier Liga combined.

Most expensive purchases: Arthur (£64.8m, Juventus), Victor Osimhen (£63m, Napoli), Achraf Hakimi (£36m, Inter Milan)
Spending in Italy dropped by almost half a billion pounds, though some of the fees still look extremely generous. Juve and Barcelona concocted a part-exchange deal which valued Arthur at around £65million, which is more of an indication of some creative accounting rather than insightful scouting. The same can be said of Napoli’s purchase of Osimhen for, on the face of it, an extortionate amount but the accountants have used their imagination here too.

Most expensive purchases: Mauro Icardi (£45m, PSG), Kevin Volland (£13.95m, Monaco), Jonathan David (£24.3m, Lille)
Clubs in France also cut their spending roughly in half compared to last summer, with even PSG feeling the pinch. However, transfer income among Ligue 1 clubs was down even further, putting them £47million in red, compared to a £75million collective profit last summer.

Most expensive purchases: Miralem Pjanic (£54m, Barcelona), Alvaro Morata (£50.4m, Atletico), Trincao (£27.9m)
Spanish clubs collectively turned a profit in the transfer window thanks largely to a huge reduction in spending. According to investment company Carteret Analytics, quoted by the BBC, spending in La Liga was down 46 per cent on the five-year average. Real Madrid failed to spend in the summer market for the first time in 40 years.

Most expensive purchases: Darwin Nunez (£21.6m, Benfica), Everton (£18m, Benfica), Pedrinho (£16.2m, Benfica)
You have to go down to the 13th most expensive transaction to find one that did not involve a Portuguese club not named Benfica. Indeed, the five most expensive signings were all made by Jorge Jesus’s team. Collectively, Liga NOS clubs made a profit of almost £96million – the biggest of any top-tier competition.

Most expensive purchases: Wendel (£18.27m, Zenit), Dejan Lovren (£10.8m, Zenit), Chidera Ejuke (£10.35m, CSKA Moscow)
Beyond the Premier League, no top-tier competition in Europe had a bigger transfer deficit than Russia, with a £56million difference between their transfer outlay and revenue.

Most expensive purchases: Marcel Tisserand (£3.6m, Fenerbahce), Vitor Hugo (£2.88m, Trabzonspor), Berkay Ozcan (£2.25m, Istanbul Basaksehir)
Spending in Turkey was 56 per cent down year-on-year, with Super Lig clubs spending £2.2million more than they made in the transfer market this summer.