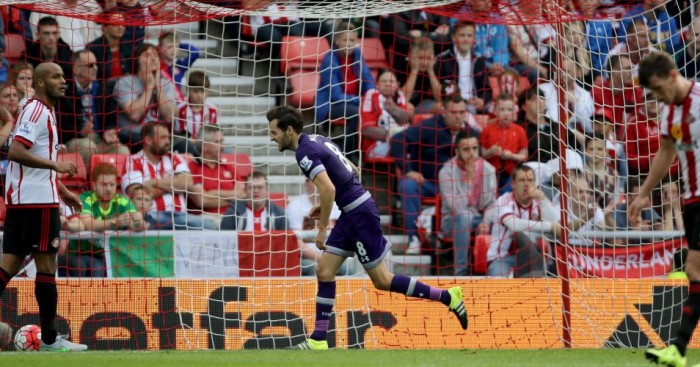 Tottenham managed to eke out their first Premier League victory of the season at the fifth attempt thanks to a late strike from Ryan Mason.

It took stuttering Spurs 77 minutes to register a shot on target but five minutes later, Mason latched onto substitute Erik Lamela’s through ball, took one touch and then fired past Sunderland keeper Costel Pantilimon.

Jermain Defoe and Jack Rodwell both hit the woodwork for the Black Cats on a day when they were much improved, but were unable to make the pressure tell in front of a crowd of 40,303 at the Stadium of Light.

Sunderland boss Dick Advocaat fielded Defoe as a central striker in a fluid formation which was at times headed by a four-man frontline with Ola Toivonen, Jeremain Lens and Fabio Borini, making a second debut for the club, providing the support.

Defoe had already seen a long-range effort blocked by Eric Dier when he warmed keeper Hugo Lloris’ hands from distance with a dipping 15th-minute effort, but the Frenchman was beaten 11 minutes later.

Lens’ beautifully-weighted through-ball allowed Defoe to race clear of Jan Vertonghen and Toby Alderweireld before sliding a right-foot shot past Lloris, only to see his effort come back off the post.

The former England striker thumped a left-foot drive into the keeper’s midriff six minutes before the break after spinning Alderweireld, with replays suggesting his claims for a penalty, which were waved away by referee Craig Pawson, might have had some merit, and it took an injury-time block from Dier to deny Lens.

For their part, Spurs were largely disjointed, although striker Harry Kane gradually warmed into a game in which he was isolated for long periods.

The visitors might themselves have been awarded a first-minute penalty after both Borini and Patrick van Aanholt nibbled at Kyle Walker inside the box, although Kane’s well-struck 16th-minute long-range drive was as close as they came until added time at the end of the half.

It was then that Dele Alli and Nacer Chadli combined for the latter to pick out Walker beyond the far post with Gomez sliding in to cut out his square ball to debutant Son Heung-min as he prepared to fire home.

Lens extended Lloris after collecting Defoe’s pass and stepping inside Walker, but Kane should have broken the deadlock with 67 minutes gone, but scuffed his volley horribly wide at the far post.

With substitute Andros Townsend starting to make the visitors tick, it took an vital block by Younes Kaboul to keep out Chadli’s 76th-minute piledriver after he had stepped inside substitute Lee Cattermole’s sliding challenge.

But it was Mason who finally settled a tight encounter, playing the ball in to Kane and then heading into box as the striker laid it off to Lamela before chipping the ball over the advancing Costel Pantilimon from his pass.

Sunderland were desperately unfortunate not to rescue a point with five minutes remaining when substitute Rodwell rattled the crossbar with Lloris beaten, and there was no way back for Advocaat’s men.