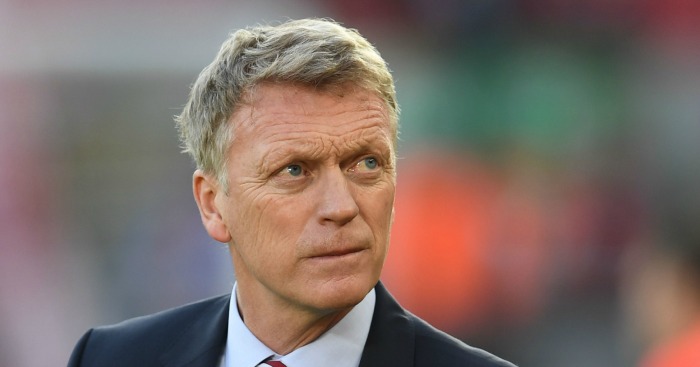 Sunderland. These days the word provokes laughs, moans, shakes of the head. The accompanying phrase ‘David Moyes’ doesn’t help much. It’s a club eternally treading water that gets deeper every year, and a once highly respected manager has been reduced to a figure of pity.

The story this season seems grimmer than usual. A parade of Manchester United and Everton rejects; injuries and absences for almost all key players; no wins until November; losses not only frustrating but embarrassing; toxic atmosphere at the Stadium of Light; false dawn after false dawn; Joleon Lescott. It’s everything a Newcastle fan could hope for.

Moyes has deepened the despair with a series of self-justifying and not entirely fan-friendly remarks. He announced at the very beginning of the season that the team would be fighting relegation. Later he said he wouldn’t have taken the job had he known how little transfer money was available. After the recent 4-0 defeat to Southampton, he said only that the performance was fine until the first goal, which shouldn’t have stood (maybe correct), conveniently omitting how thoroughly the side had capitulated.

Here are current points totals and odds to go down of the bottom five from Ladbrokes:

Astonishing, if you think about it for a minute. Only three points from safety with 13 games to go, but case pretty much closed.

Remember, though, we’re talking about Sunderland. They’ve turned The Great Escape into a long-running reality series. It doesn’t matter if your name’s Di Canio, Poyet, Advocaat, or Allardyce, you can count on the Black Cats to arch their backs, make themselves look big, and hiss sufficiently loudly to scare off the enemy when they’re cornered. Or, changing the metaphor, to saunter negligently through the alleyway, knowing they need only spend one of their nine lives to stick around the neighborhood for another year.

So let’s ask the question, can Sunderland survive again? Here are their remaining games:

It’s doable. Their games against the top teams sit nicely: two at home, one at the Emirates (where anything is possible, and where a draw in 2015 sealed their survival), and one in the final week at Chelsea, who hopefully won’t have anything to play for. The game at Everton looks tough, but psychological factors may work in their favour. They get West Ham at home, and they’re done for the year with Stoke, West Brom and Southampton.

Of the bottom-half opponents, Burnley and Bournemouth have been poor away this year (although Leicester have been strong at home), and Swansea may be clear when they meet in week 37. Overall, lots of points to be had, although admittedly they play their three closest relegation rivals away.

Now for the squad. I wish I could say they’re underperforming, but they’re not. In fact, every statistics we have says that Sunderland’s results are about their true level at the moment. Expected goals, total shot ratio, shots on target ratio, PDO, and for all I know number of players who use Facebook, are right around par. They’re at the bottom on merit. This is actually quite helpful, because it tells us they’re going to have to play better in all departments in order to survive.

So where do we see potential for improvement?

First, at keeper. Jordan Pickford will soon be back in action, and if he’s back to his previous level, he’ll be one of the best in the league. Vito Mannone hasn’t been terrible, but Pickford is higher class, and he’s been missed.

In central defence, Lamine Koné has been outstanding at times, particularly in recent games against Spurs and Crystal Palace. He stepped up at the tail end of last season, and could do so again. Papy Djilobodji remains wildly inconsistent, but a brilliant performance against Watford suggests that if he’s in the right mood, he could come through.

At full-back, Bryan Oviedo has impressed in his early games, and might be an important addition. Billy Jones is Billy Jones, who pretty much figures to be what he’s always been.

The key figure in midfield is Didier Ndong. Disappointing early in the season, he’s found his feet and is showing real quality. No reason he can’t continue to play at his higher level.

Unfortunately, the rest of the midfield offers little promise of improvement. Seb Larsson is Seb Larsson like Billy Jones is Billy Jones. Jack Rodwell? Steven Pienaar? Maybe Darron Gibson can be as good as Oviedo. The best hope seems to be the return of Jan Kirchhoff and Lee Cattermole in late March or early April.

In attack, Victor Anichebe may not make it back in time, and Moyes clearly doesn’t care for Wahbi Khazri. That leaves Jermain Defoe, Fabio Borini and Adnan Januzaj. The first two are known quantities, although Borini has a habit of scoring valuable late-season goals.

Januzaj is the one to watch. For most of the season he’s seemed not quite up to the task physically (too lightweight) or mentally (lots of flopping and complaining). Then suddenly against Palace, and in the first half-hour against Southampton, he looked the business: picking his passes well, linking effectively with Defoe, once even driving forward for all the world like Paul Pogba. But when Sunderland went down a goal, all the bad habits returned. He’s the only real creative player in the side, so much will ride on his late-season form.

Admittedly a lot of things have to happen right, but that’s the case with most survival campaigns. And there’s a wild card which is very much in Sunderland’s favour. In 25 games, they have scored from one set-piece. Just one. It only takes a few extra set-piece goals to produce a string of positive results. And set-pieces are one of many things that can be coached.

So if there’s enough potential for a Great Escape – and remember right now Sunderland’s escape doesn’t need to be particularly great – that leaves the manager. But Moyes is frankly an enigma at this point. The experiences in Manchester and San Sebastián appear to have left their mark; he just doesn’t seem as confident and in charge as at Everton. But it’s easy to forget he turned around a very difficult situation at Real Sociedad, walking into a team that had won only one of ten, and pulling them to the top half of the table before a late fade.

But that mess wasn’t of his own making, and this is. Which means that although the club may be used to these kinds of crises, he’s in terra incognita.

And that brings us to Donald Trump. Literally. Because Sunderland’s we’re-out-of-the-cup February team bonding exercise was a trip to the far-flung port of New York City. Moyes went so far as to invite Trump to visit the team, and suggested the squad might try to get close to Trump Tower. Neither seems to have happened, to which the man himself might have said “Sad!”. But we got photos and films of the squad working out, jogging and cycling around Central Park, visiting Manhattan landmarks, and generally smiling for the camera like a happy band of brothers undisturbed by signs of doom.

Which brings us to Donald Trump again. On the eve of the presidential election, one of the most respected US-based election prediction sites put his chances of winning at less than 1%. That’s considerably less than Sunderland’s chance of survival. If the manager can figure out which speeches to make and how to deploy his followers, they’re in with a shout. And now that you mention it, in the right light David Moyes does look a bit orange…