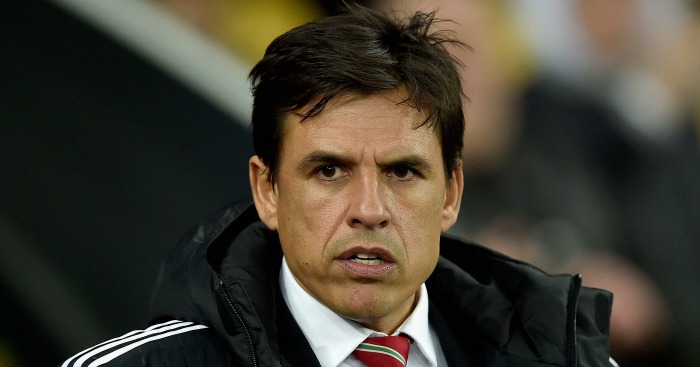 Chris Coleman has been confirmed as the new Sunderland manager on a two-and-half year deal.

The former Wales boss becomes the Black Cats’ ninth manager in the last six seasons and replaces Simon Grayson, who was sacked at the end of last month.

“The Welshman has signed a two-and-a-half-year deal at the Stadium of Light and arrives on the back of six memorable years as Wales boss, during which time he managed his country into the top 10 of FIFA’s world rankings and an incredible run to the semi-finals of Euro 2016.

“The 47-year-old was highly sought-after but chose Sunderland as the fifth club of his managerial career, following spells with Fulham, Real Sociedad, Coventry and AEL.”

Coleman takes over a club in crisis with Saturday’s 2-2 draw with Millwall giving them an unwanted English record of 20 consecutive home games without a win.

Coleman took charge of his first training session on Sunday morning and will be in charge of the side for the first time for Tuesday’s trip to Aston Villa.

His willingness to take over the Black Cats in their predicament has been considered a surprise in some quarters, given his soaring reputation following his success with Wales.

Coleman said: “It’s an honour to be appointed the manager of Sunderland AFC and I’m over the moon that the club believes I am the right man.

“The club worked incredibly hard to make sure we were a good fit and to show me the potential that can be achieved here.

“I believe that every person at this football club, every player and every supporter has a part to play in getting us back to where we belong.”

Coleman arrives with the backing of his predecessor Grayson, who urged the club hierarchy to give him time to help turn the club’s fortunes around.

In an interview with BBC Radio 5 Live’s Sportsweek programme on Sunday, Grayson said: “I think the biggest thing Chris will need is time because it does not happen overnight.

“You can’t turn a club around so quickly when it’s been through some real dark stages, and that’s what he will need to make it a success again.”

Chief executive Martin Bain, who led the search for Grayson’s successor, said: “The football club has conducted a thorough process over the last three weeks to identify the best manager for the job, before and after which Chris was the clear first choice.

“We are delighted that he and Kit Symons, his assistant manager, have joined us, and are now focused on working together to get the football club moving in the right direction.”