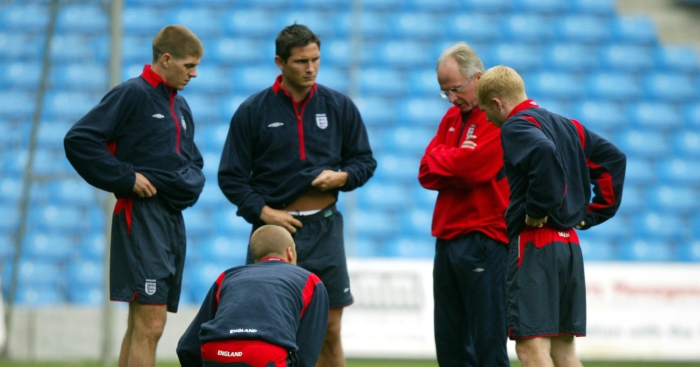 Sven-Goran Eriksson has discussed how he tried to field Steven Gerrard, Frank Lampard and Paul Scholes in the same England starting line-up.

Eriksson left as England manager in 2006 after guiding the Three Lions to three consecutive quarter-final finishes at the 2002 and 2006 World Cups, as well as Euro 2004.

England have not reached that far in any tournament in 11 years since his departure, although Eriksson had a deep pool of talent to choose from.

Gerrard, Lampard and Scholes were all in or approaching the primes of their careers at the time, and Eriksson was tasked with finding a system to accommodate them all.

The central midfield partnership between Gerrard and Lampard remains a talking point to this day.

“I don’t get fed up of it,” he told the Daily Mirror. “But during my time there, when they more or less played together every game, I think we lost one qualifier in five and a half years.

“At the big tournaments, we lost twice on penalties and once against Brazil. I think they did well.

“We discussed it many times – one of you goes and makes deep runs, the other one, you sit. They were good at it, both of them. One goes and one stays – if your name is Lampard or Gerrard, who cares?”

The accepted wisdom is that Scholes, who retired in 2004 after the European Championship, made his decision to quit international football as he was always moved out to the left in order to give Gerrard and Lampard a chance in the centre.

“Paul Scholes had everything as a football player,” Eriksson said of the Manchester United legend.

“It was a very sad for me, the day after the tournament in Portugal when he came to me and said, ‘It’s finished, I don’t want to play any more.'”