Home All The News Swans boss is ‘funny, he’s a laugh’ – Mawson 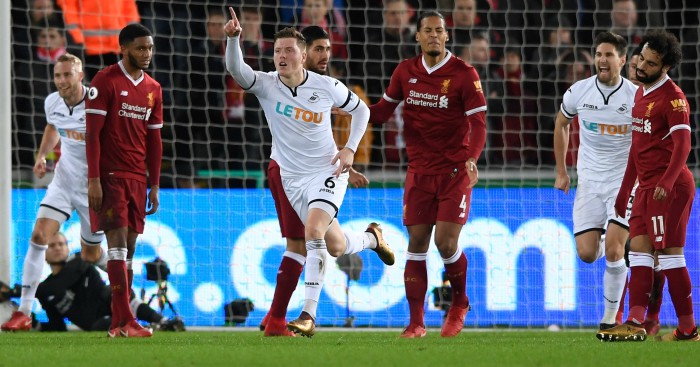 The Swans have lost only twice in 16 matches in all competitions under Carvalhal, who has transformed their fortunes since replacing the sacked Paul Clement at the end of December.

“He’s been brilliant,” said Mawson. “He’s been a breath of fresh air. He’s full of character, full of energy, everything we’ve been thriving off. It’s a pleasure to play underneath him.”

The hard-earned point has lifted the Welsh club four clear of the bottom three and kept them one place above Huddersfield on goal difference with eight games remaining.

When asked if Carvalhal was a potential candidate for manager of the year, Mawson said: “He’s done something right, hasn’t he?

“Whatever he’s done, it’s working. We’re feeding off him. He’s funny, he’s a laugh, but when he gets down to business, he means business.

But Mawson agreed with Huddersfield boss David Wagner, who felt the Ghana international’s sending off was fully justified.

“I watched it back,” said Mawson. “There are no arguments. I can understand why he gave it.”

Mawson has been linked with a place in Gareth Southgate’s World Cup squad for Russia 2018, while Carvalhal rates him as one the best centre-halves in the Premier League.

“It would be an honour, don’t get me wrong,” Mawson added. “I’m English through and through, and I’d be very proud.

“But I’ve got other things to worry about at the moment. I’ve got to help keep this team in the Premier League.”