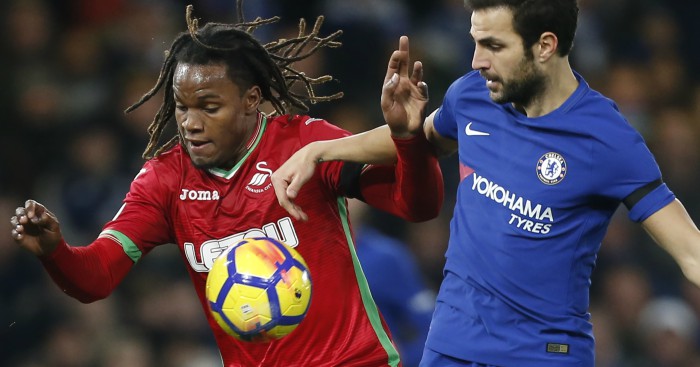 Paul Clement has promised Renato Sanches’ difficult loan spell at Swansea will not be cut short.

Sanches has endured a torrid time in south Wales since joining on a season-long deal from Bayern Munich in August.

The 20-year-old Portugal midfielder, who was named the best young player at Euro 2016, has failed to score or provide an assist during a spell punctuated by injuries and poor form.

And Sanches’ season hit a new low at Chelsea on Wednesday night when he was substituted at half-time after regularly giving possession away.

Sanches’ miserable evening was summed up by one pass, which was sent straight into a advertising hoarding with no Swansea player anywhere near the ball.

But Clement said: “We are working together to make this right for both sides, for them and for us as well.

“There were two representatives from Bayern at the game and I am in regular contact with them about how he is doing.

“They very much want to support him and that was the message I received from them on Thursday.

“We can see he is struggling and it is a big responsibility for us and them to help and support him.”

It remains to be seen whether Sanches will keep his place at Stoke on Saturday, with Swansea in desperate need of goals and points.

Swansea are the lowest scorers in all four divisions of English football and only Crystal Palace’s inferior goal difference is keeping them off the bottom of the Premier League.

But Clement, who worked with Sanches last season when he was Carlo Ancelotti’s assistant at Bayern, feels he is the right man to get the best out of the young Portuguese.

“When you have a talented player who is struggling for confidence and form, but you know has talent and if he plays to his potential is going to help the team, you have to try and manage him in the best way possible,” Clement said.

“I have a lot of experience working with young players and that is why I wanted to bring Renato and Tammy Abraham to this football club.

“I have worked in academy football and youth development and I do maybe have more patience than some managers.

“Some managers never turn to young players. But I think I have a good understanding of how to try and get the best out of young talent.”