Home Competitions Swans boss speaks out over Llorente and Sigurdsson 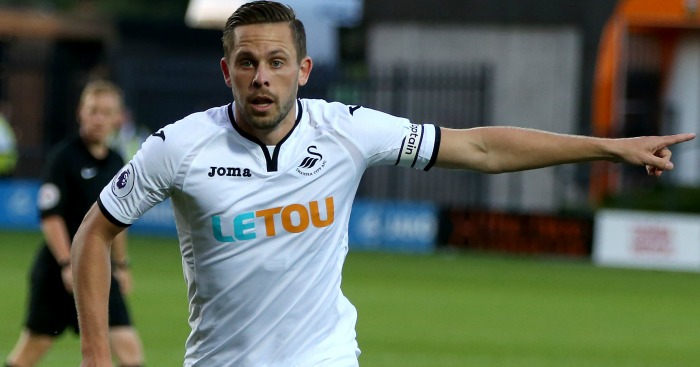 Paul Clement insists Fernando Llorente will be staying at Swansea after admitting the club are in “limbo” over the Gylfi Sigurdsson transfer saga.

As Swansea and Everton remain in talks to break the deadlock over Sigurdsson’s protracted transfer to Goodison Park, Clement believes Llorente will not be following the Icelandic playmaker out of the exit door at the Liberty Stadium.

The Spain World Cup winner is currently injured after fracturing his arm in a cycling accident while on holiday last month and will miss the opening game of the Premier League season at Southampton on Saturday.

But head coach Clement says the 32-year-old targetman – Swansea’s top scorer last season with 15 goals – will remain at the club, despite reported interest from champions Chelsea and a possible reunion with his former Juventus boss Antonio Conte.

“He (Llorente) has got a year to go on his deal and we’d like him to stay for this year and longer,” Clement said.

“I’m confident he will because of the conversations I’ve had with Fernando.

“He’s a really good player and it’s a shame with the injury he got in the summer.

“It’s a freak one and he did finish off the season strongly. His goals were vital and we want to have him as an option.”

Sigurdsson’s future would appear to be on Merseyside, with Everton boss Ronald Koeman again claiming that the deal for the 27-year-old playmaker is “still close”.

Despite suggestions that transfer talks between the two clubs had broken down, Koeman said Everton remain in negotiations with Swansea – a point backed up by Clement.

Swansea value Sigurdsson at £50million but Clement called for compromise on both sides to get the deal done.

“The objective and the aim is that at some point the two clubs will meet.

“I think the way it’s going I think there needs to be more than likely a compromise on both sides. That is very often how a deal is made.”

Sigurdsson has not played for Swansea since their first pre-season friendly at Barnet on July 12.

He pulled out of the club’s tour to the United States and, although he has since taken a full part in training, he will not be involved at Southampton.

“It’s been decided that it’s in the best interests of everyone that he doesn’t play in this first game,” Clement said.

“It’s not an ideal situation, I can’t say that it’s not.

“We are at a critical stage of this situation and hope it’s going to be resolved very quickly. Everyone wants that.”

On potential targets to replace Sigurdsson – former striker Wilfried Bony and Nacer Chadli have both been linked – Clement added: “I’m as confident as I can be from my talks with the owners and the chairman that if this goes through, that we’re ready to go.

“But what you can’t do is control the decision-making of the other club.

“We’ve got a good idea of what players are going to cost. So we’re as ready as we can be.”