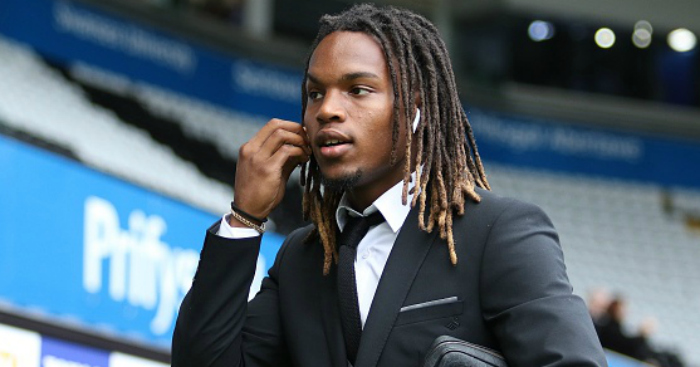 Renato Sanches has kicked his last ball for Swansea after enraging fans on social media just hours before the club were all but relegated from the Premier League.

The Bayern Munich midfielder – who has had a disastrous loan spell at the Liberty Stadium – was rounded on by Swansea fans on Wednesday after his new personal emoji was announced on his official Twitter account.

The previous evening Swansea had lost their crunch relegation battle against Southampton, and a few hours later the club’s relegation was all but guaranteed after Huddersfield held Chelsea at Stamford Bridge.

Fans responded angrily to the tweet and Swansea manager Carlos Carvalhal termed the social media post “stupid”, although he insisted that is not the reason the Portugal international has played his final game for the club.

“Renato will not be involved on Sunday. He will not be on the bench,” Carvalhal said ahead of the final game of the season at home to Stoke.

“It is not about that (the emoji post). It is because Leon (Britton) will instead be on the bench in his last Swansea game.

“But I say all the time to the players about (the dangers of) social media, and the majority of the time it is not them doing it.

“They are getting people who support them to do it – and sometimes their friends are stupid.

It remains unclear whether Sanches will be at a game where Swansea need a football miracle to survive.

Swansea must beat Stoke and hope Southampton lose at home to Manchester City, while enjoying a 10-goal swing in the process.

“I talked with him Wednesday and explained he would not be involved Sunday,” Carvalhal said.

“I told him if he preferred he could go home, he was given the decision.

“He decided himself to stay here and said that he would prefer to train.

The emoji controversy has rounded off an unforgettable season for the 20-year-old Sanches, who was named young player of Euro 2016 after Portugal won that tournament.

Bayern allowed him to go out loan after a difficult first season in Germany but his signing was hailed as a great coup for Swansea.

But Sanches has had injury and form issues, failing to score or provide an assist in his 15 appearances, and the nadir came when he ridiculed for passing a ball to an advertising hoarding at Chelsea with no Swansea player anywhere near.

Sanches has not featured since the end of January because of a hamstring injury, and Carvalhal chose not to use his fellow countryman even though he has been among the substitutes for the last three games.

“He knows that he did a very bad season,” Carvalhal said.

“The press are talking that maybe he can go back to Benfica and, if that is the reality, that is the best step for him.

“Renato jumped very fast from the under-19 team to the national team, but was he ready to go out of Portugal to a big club? In my opinion, no, because he is a boy.

“He needed to stay at Benfica for two or three years, but he goes to Bayern Munich – one of the biggest clubs in the world – and there it is very hard to play games.

“He was inside the machine when he was not ready to be.

“If he can go back to Benfica he would benefit from having his parents and friends still around him. He has a big potential still.”