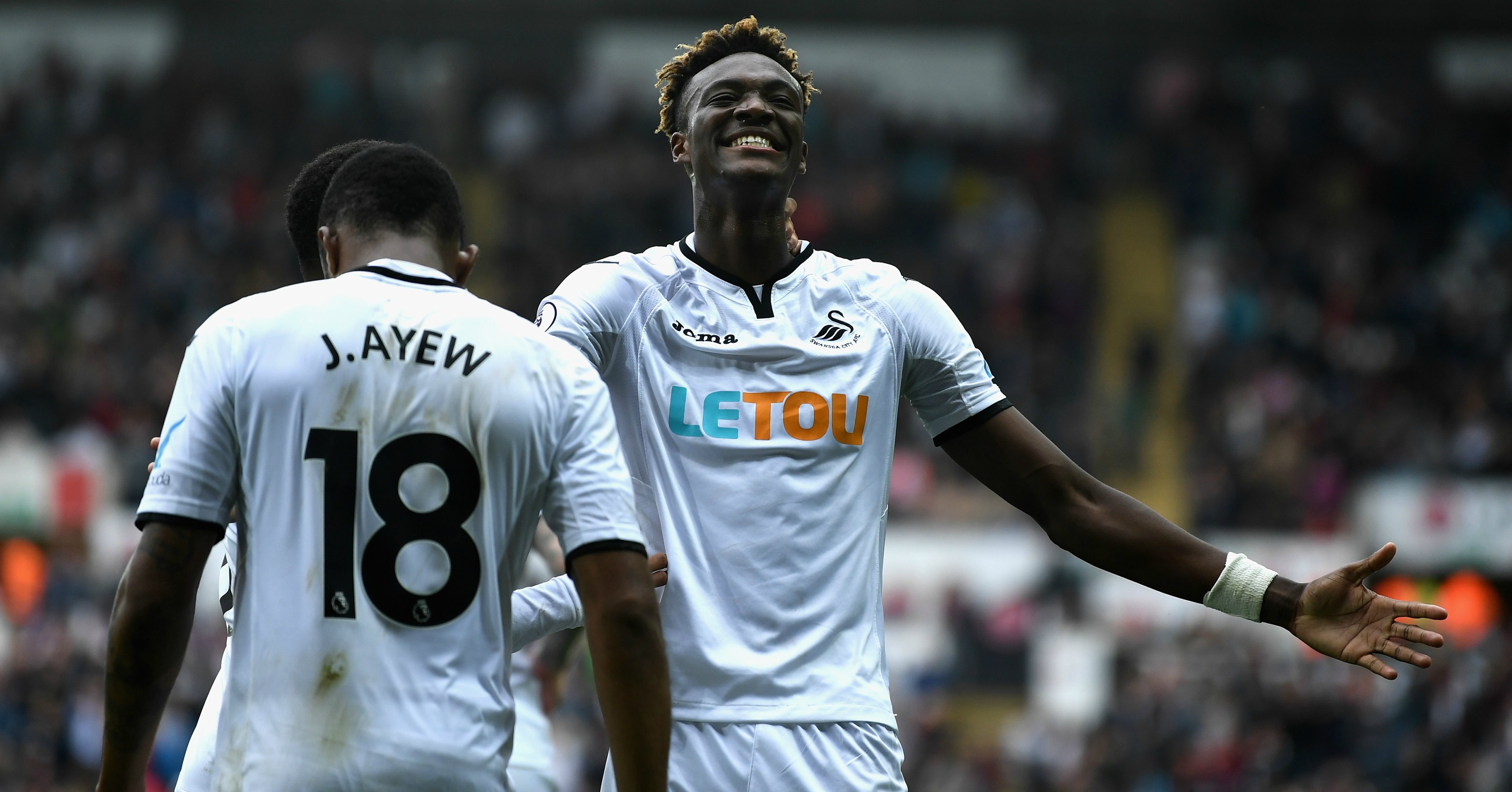 Before the season began I picked Swansea City to go down. They’d lost Gylfi Sigurdsson and Fernando Llorente without any reliable replacements, and Paul Clement, although a competent manager, didn’t seem the type to spin straw into gold. Eight games in against an average-strength schedule, the Swans have eight points, and at that pace would probably squeak by. But they’ve played exactly one good half of football – the second half against Huddersfield on Saturday – and although the three points are very welcome, it may yet be a long season. Let’s take stock.

The catalyst in Saturday’s win was Tammy Abraham, the striker on loan from Chelsea. I’ll have much more to say about him in tomorrow’s Team of the Week. For now suffice to say he’s easily their best player, an all-round attacker of real quality. Stat time: 44% of his unblocked shots have gone in the net, and 66.7% have hit the target. Those numbers are unsustainable, but he has the look of a guy who’s a threat every time he receives the ball.

And there’s the rub. Like many before him, he needs service, and neither he nor anyone else has been getting much of it this season. The Swans are last in shots by a very long way, and even in the win over Huddersfield they had only seven, barely more than their season average.

Right now the most important man in that regard is Jordan Ayew. His reputation is as a decently talented, very hardworking, not very tactically aware player. He’s still got the talent and work ethic, and in the last few weeks he’s shown glimpses of the good player he can be. He was brilliant digging out the ball and feeding teammates a few weeks ago against Watford. Against Huddersfield, it was his lovely chip that Abraham turned in for the second goal, and even better was a Socrates-level dummy to set up the first. He needs to be both scorer and provider for the Swans to succeed. Right now he has only one goal in 10 shots and only two key passes for the season.

Second on the must-do-better list is Tom Carroll, left-sided midfielder. He can go missing for entire games, then look like a match-winner. His pass for the opening goal against Huddersfield was a beauty. I rate him higher than most, but by and large he hasn’t produced. His set-piece deliveries, normally a strength, have been erratic as well. He’s not a very good defender, and I think Clement has to accept this and give him a bit more rope.

After that, it’s catch as catch can. Fans and press have called for more wing play, but for that you need a quality winger. Luciano Narsingh played very well on Saturday, but a good showing against Scott Malone doesn’t make you Jefferson Montero, or even Nathan Dyer. Back in the middle, Leroy Fer will occasionally pop up with a goal or good pass, but only occasionally. Ki Sung-Yeung has returned after a lay-off, but isn’t really an attacker.

Almost forgot – Renato Sanches is in the squad. His debut was underwhelming, to say the least, and now he’s injured. No one doubts his talent, but he’ll require some time to bed in, and it’s anybody’s guess whether he can fit Clement’s fairly structured approach.

Defence is the manager’s strong suit, and while Peppa Pig would have been an improvement on Bob Bradley, the side has played very solidly under Clement. Only four teams have allowed fewer goals this season: Man United, Man City, Spurs, and Burnley. Not only do they work more consistently as a unit, there’s been a clear leap in quality from two of the back-line starters.

The first is Federico Fernández, a player I’ve watched carefully over the years. He’s a mobile centre-half, excellent at covering and good at distributing from the back. But you could always rely on him for a crucial breakdown somewhere in the 90 minutes, either marking or decision-making. Watch Romelu Lukaku’s goal to see the sort of thing I mean…

But that’s happening less and less often, and the past few weeks have been some of his best in a Swansea shirt.

The second is right-back Kyle Naughton, who for ages has looked short of Premier League quality. No more. He’ll never be a star, but now he’s a useful player, the sort who’ll give you 6/10 most days, with a few missteps and a few good plays thrown in.

The other full-back is Martin Olsson, who came from Norwich as a decent player and has stayed that way. He’s a bit more likely to get forward than Naughton. The other centre-half is Alfie Mawson, who’s been doing the one-step-forward-one-step-back thing for a while. At the moment he’s on the forward part of the cycle, and with Clement there’s at least the prospect of lasting improvement.

At keeper is Lukasz Fabianski, who needs no introduction. Good player, playing well so far this season.

One player I haven’t mentioned yet is Leon Britton, the heart and soul of the side since Ashley Williams left. He’s near the end of his career, and gets bypassed far too often – but the midfield always seems more stable with him at the base. His 93.1% pass completion speaks for itself.

Last is The Return of the Native, Wilfried Bony. He cost £12m, not all that much these days, but to my mind it was an uninspiring deal. He adds depth to the squad, but he’s best as a lone striker, and isn’t likely to displace Abraham. Maybe he can play alongside Abraham or just behind him, but I’d have to see it to believe it.

It comes back to Abraham, then. I’d say the side has to be built around him, and it may be necessary to sacrifice a little defence to get men close by. Ayew, in particular, needs to be placed and instructed so he and Abraham can combine more, which might produce more chances for both men. A bit more pressing, like against Huddersfield, could create more opportunities as well. Renato Sanches is the wild card.

Thirty games and the January window to go, which means just about anything can happen. In my book revising predictions is a red card offence, so I’m stuck with saying they’ll go down. The next five fixtures look very important indeed: Leicester (H), Arsenal (A), Brighton (H), Burnley (A), Bournemouth (H). Four of those opponents might be fighting relegation themselves. I’m always happiest when proven wrong – so let’s hope they tear through that lot. But they’ll have to up their game considerably, and they know it.