Home Competitions Championship Swansea City Swansea’s Clement: I am not at end of my tether 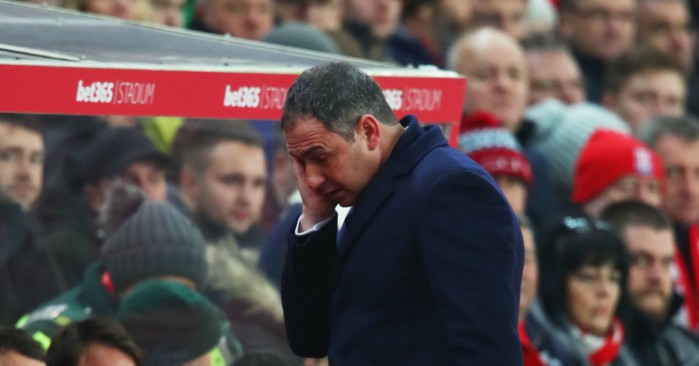 Paul Clement insists he has the hunger and desire for Swansea’s relegation fight.

After last weekend’s defeat at Stoke – which sent Swansea to the bottom of the Premier League – Clement cut a despondent figure with his tone and body language questioning whether he had the stomach for the battle.

Swansea entertain fellow strugglers West Brom on Saturday in a game many observers feel they must win for Clement to remain as head coach.

And Clement, who insists he has the backing of Swansea’s American owners whatever the outcome against the Baggies, says he is determined to turn around the club’s fortunes.

“I was disappointed at the end of the Stoke game and that is the reason I looked so frustrated,” Clement said.

“I am not at the end of my tether, I still feel very much this team can get out of the situation it is in.

“I have no doubt I am the man to turn it around and that the players are behind me.

“I have enough experience to know when the dressing room is behind me and when it’s not.

“I’ve experienced dressing rooms that have grown apart from their manager and sometimes that’s difficult to get back.

“But I do not have that feeling at all. It is a positive dressing room with a good group of players, and we’ve just got to find that little ingredient now to get us a win.”

Swansea have won only two of their 15 Premier League games, with their last victory coming against Huddersfield in mid-October.

Clement revealed that he has spent 90 minutes on the telephone to Swansea majority shareholder Steve Kaplan on Wednesday night – and says the board’s backing towards him is unequivocal.

“Internally everyone is working in the same direction,” Clement said.

“Any pressure and talk that I’m not going to be here is from external sources. It’s not from within.

“I had a positive conversation with Steve on the phone when we were talking about past games, future games and the (transfer) window.

“I meet with the chairman (Huw Jenkins) every day and the communication lines are open.

“I don’t fear it (consequences of losing to West Brom), not as my position as head coach.”

But Clement insisted it was a united camp, saying: “In my view, there are no divisions.

“It is a cohesive dressing room, one which is fighting and showing their passion for the club.

“What was said was no big deal, it was nothing abnormal.

“I was glad it happened and I had been waiting for it. It was healthy discussion and one that needed to happen.”