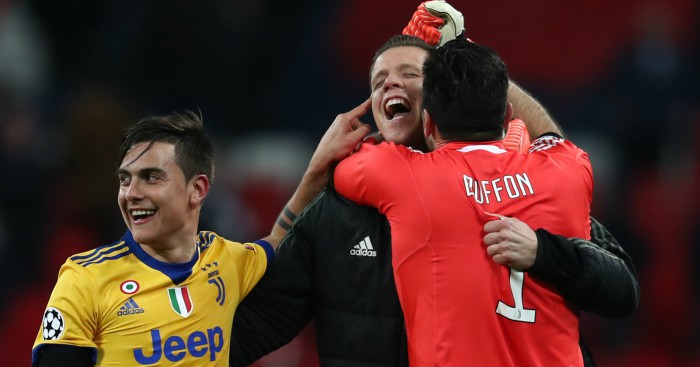 Wojciech Szczesny enjoyed silencing the Tottenham fans at Wembley on Wednesday while Juventus knocked them out of the Champions League.

Former Arsenal keeper Szczesny was a substitute for Juve, who came from behind to score two quickfire goals in the second half to secure a 4-3 aggregate victory and reach the quarter-finals.

Juve defender Georgio Chiellini spoke about how Spurs lacked the mental resilience to progress, while Gianluigi Buffon’s understudy Szczesny reinforced the view that the Italian champions’ experience told in the end while milking the victory over Arsenal’s north London rivals.

“I enjoyed it a lot – there were a couple of fans, very vocal next to my bench, who went missing after the 80th minute,” said Szczesny.

“We’ve got players who have won the World Cup, they’ve won six championships in a row and you see that makes a difference in the difficult situations. Where others crumble we manage to get out on top.

“We’re not here by accident. This club has won so much in the past. It didn’t just happen overnight.”

Mauricio Pochettino suggested that Tottenham were the better team – a claim Szczesny refuted.

“Probably the Tottenham people would say that but we believe we deserved it,” he said.

“The only thing that makes a difference in football is who can score more goals.”

Great win and celebrations vs one of the best teams in North London 😎 FORZA JUVE!!! ⚪️⚫️ #northlondonisred