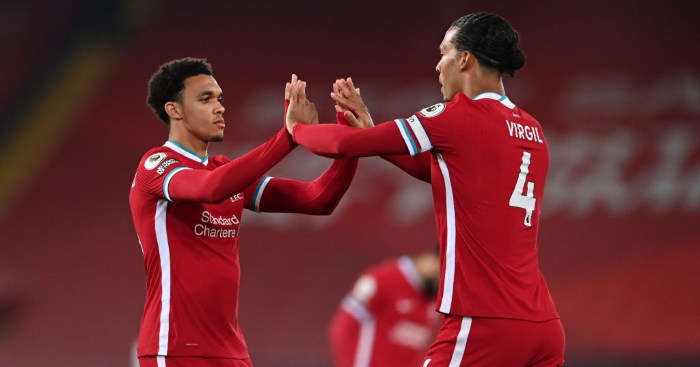 Liverpool star Trent Alexander-Arnold has admitted it is “weird” without Virgil Van Dijk, but they are doing well in his absence.

Van Dijk suffered a season-ending injury in a collision with Jordan Pickford in the Merseyside derby last weekend.

It was later confirmed that the Dutch defender had suffered ACL ligament damage, and he has since had surgery.

Liverpool have coped well without Van Dijk so far. They beat Ajax 1-0 in the Champions League in midweek, before getting a 2-1 win against Sheffield United on Saturday.

Alexander-Arnold told their official club website that Fabinho and Joe Gomez have had to step up in Van Dijk’s absence:

“He’s a massive presence on and off the pitch, in the changing room, everything.

“His communication and leadership is massive for us back there, he’s probably the leader of the back four and obviously without him, it’s a bit strange because this is probably the first time and the first spell where we haven’t had him since he’s come in.

“So it’s a bit weird for us but we want to adapt and adjust and I think in the two games we’ve been without him – well, three if you include Everton – we’ve shown how good we are defensively.

“Fab’s stepped up and done an amazing job in there [and] Joey G is stepping up and leading as well.

“So even though it’s disappointing not to have Virg, it’s also an opportunity for us to come together as a back four and show our leadership and show that even though Virg is a big miss, hopefully, we won’t miss him as much as everyone potentially thinks.”