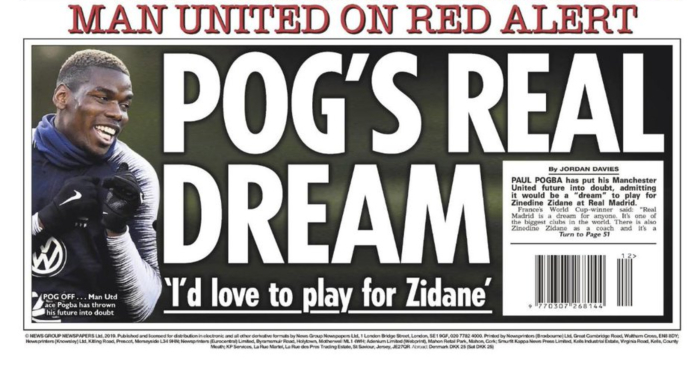 Mediawatch revisited
On Wednesday, the Manchester Evening News was busy pretending that Manchester United had a ‘crucial advantage’ over Tottenham, Arsenal and Chelsea in the Premier League.

‘Supporters would be forgiven for letting out a loud sigh when they saw the news Luke Shaw, Nemanja Matic and Romelu Lukaku have withdrawn from their respective national squads through injury,’ they wrote. ‘Three of the most consistent performers this season are out of the national set-up and the full extent of their lay-offs remains to be seen.

‘The trio of setbacks might be bad news for supporters in need of a vague interest in the upcoming international fixture schedule, but it might just come as a blessing for Solskjaer and his coaching staff.

‘That is because his withdrawal means United now have just six players away with their national sides over the upcoming break, a clear advantage when compared with some rivals.’

It was confusing then, when they published separate stories describing both Matic and Lukaku’s injuries as ‘blows’, and it is just plain weird now Marcus Rashford is likely to miss England’s game on Friday after suffering a setback of his own.

‘United will be hopeful England’s decision is simply precautionary,’ say the MEN, ‘as they have already seen four players withdraw from international duty with injury already this week.’ The subheadline to their story tells us ‘Man Utd’s injury concerns may be set to continue’.

From ‘crucial advantage’ to ‘injury concerns’ in less than 24 hours. Impressive.

When Manchester United's raft of international break injuries is both a 'crisis' and an 'advantage'. pic.twitter.com/voCHEj8lLX

Denis the menace
That injury story was top of the Daily Mirror website late on Wednesday afternoon. By Thursday morning, it was replaced by some huge Arsenal news.

‘Suarez axed by Arsenal boss Emery over ‘poor performance in training’ as Gunners look set to send midfielder back to Barcelona,’ reads the headline on the homepage. It is even more sensational(ist) once you click in.

Oh wow. Mediawatch is intrigued. Has Suarez fooled Emery by pretending to be the Spanish Aaron Ramsey? Did he interrupt an elaborate handshake between Alexandre Lacazette and Pierre-Emerick Aubameyang? Has he shat on the pitch and branded it better at defending than Shkodran Mustafi?

The story is based on quotes from French football expert Julien Laurens. So let’s find out what this thing was that Suarez ‘did in training’ to be ‘axed’.

“It hasn’t really worked out for Suarez. It is nothing Emery could have guessed before, anyone else at the club, not even Suarez.

“On paper he looked like a good signing, it’s a loan, let’s see what he can do in England.

“It turns out even at training maybe Emery has seen that he was not good enough to give him more game time.”

Express delivery
Put the above story through the Daily Express website’s click machine and what do you get?

Real ambition
Far from celebrating injuries to half of their squad, United might be more interested in what Paul Pogba had to say on Wednesday evening. His quotes provide The Sun with an easy back page.

‘Paul Pogba has put his Manchester United future into doubt, admitting it would be a “dream” to play for Zinedine Zidane at Real Madrid,’ reads their first paragraph.

That’s awfully funny, because exactly a week ago he ‘told Manchester United he has no plans to quit in a sensational U-turn from just three-months ago’ in a Sun website exclusive, complete with random-hyphen.

‘The French World Cup winner has held a series of private talks with Solskjaer over the last few weeks at Carrington,’ that story told us.

‘And the 25-year-old has assured the United boss he wants to stay and has plans to captain to the club for a number of years.

‘Pogba has a young family settled in Manchester and has no plans of relocating them elsewhere in Europe this summer.’

Yet now he ‘has put his future into doubt’. It’s almost as if he also said he’s “happy at Manchester” and isn’t looking to leave.

Tiki tacky
Mediawatch thought Pogba might be too busy to do U-turn upon U-turn over his United future. After all, shouldn’t he be consulting The Sun on how to spend his own money?

You see, he has commissioned and paid for Super Bowl-style rings to commemorate France’s World Cup win last summer, with every member of the squad receiving a personalised piece of presumably rather expensive jewelry. And again, this was all paid for out of his own money, not the French Football Federation’s.

So how does The Sun newspaper treat such a benevolent act? By suggesting that posing for a picture with a proud Blaise Matuidi was Pogba ‘showing off the bling he bought his France pals’.

And how does their website report on the story?

The Sun have described Paul Pogba's ridiculously generous gesture of buying commemorative World Cup rings for the entire France squad (out of his own money) as 'tacky' online and an example of 'bling' in their newspaper.

Beginning of the Hend
Here is how the Daily Mirror‘s Andy Dunn explained how terrible England were in June 2018:

‘That’s a goalkeeper, with a relatively ­recent relegation to his name, who has done little but fish the ball out of his net in the last two seasons.

‘A back three that has one player out of position, another who is fourth in a pecking order of four for his day job, and a third who was at the last major tournament two years ago as a pint-loving punter.

‘A midfield that has as its linchpin a player who Sir Alex Ferguson says cannot run properly, and a strike-force spearheaded by a captain with a poor, if brief, record in tournament football.’

Here is how Andy Dunn describes the ‘midfield lynchpin’ that ‘cannot run properly’ in March 2019:

‘Jordan Henderson captains the Premier League leaders, wore the armband in last season’s Champions League final, and anchored England’s midfield in a campaign that took them to the last four of the World Cup.

‘He has made over 300 Premier League appearances and, should he feature against the Czech Republic tomorrow and Montenegro on Monday, his tally of international caps will reach half a centrury.

‘Yet, every day, Henderson feels he has to prove himself.’

Recommended reading of the day
Jonathan Wilson on Lionel Messi.

Nick Ames on the international break.