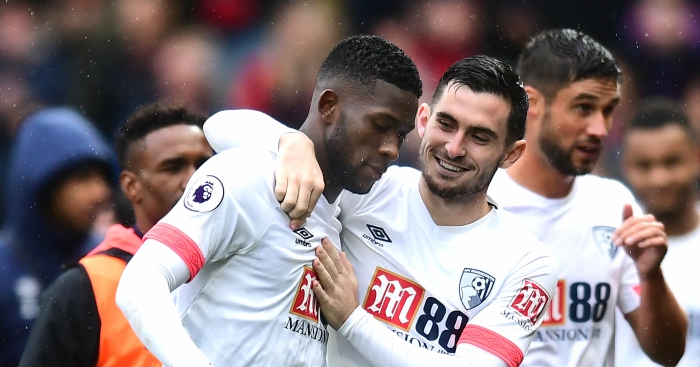 On Wednesday, Sarah Winterburn listed ‘likeable teams gatecrashing the top eight’ as one of the great things of the season so far, with Bournemouth the main poster boy for likeability and gatecrashability.

So we’ll take a look at exactly how Bournemouth have forced their way past the bouncers. It’ll be stat-heavy in parts, but that’s only because the stats are quite remarkable, and very revealing. In the end we’ll get a picture of a side that in a little over a season has been completely transformed, and as a result are performing at an unprecedented level.

Let’s get xG out of the way first. Using Understat’s numbers – and dropping penalties from the equation – Bournemouth are fifth in xG, ahead of Manchester United and Arsenal. They’re also fifth in xGA, ahead of Manchester United, Arsenal and Chelsea. In fact, they’re actually slightly underachieving in both categories. So they’re no fluke – they belong right where they are. Caveat: they’ve had a fairly easy schedule. The only top six team they’ve played is Chelsea. But, as we’ll see, they’ve developed a style that should serve them well when the big boys come to town.

Part of that style is a conservative defence. Now ‘conservative’ is not a word one often associates with Howe, but the central defenders have been more controlled than at any time in the past several years. When Nathan Ake first arrived at Dean Court, his main weakness was a tendency to step forward at the wrong times, and thus get caught out. He seems to have eliminated that part of his game, and so his excellent natural skills are coming to the fore.

Then there’s Steve Cook, whose game has always had a bit of the spectacular. He’s still a mad shot-blocker in the John Terry mould (and it’s not just madness – his technique is superb). But when struggling – and there was a lot of that last season – he seemed to be trying to go in all directions at once. Now he seems much steadier, in part because the system allows him to be.

So what is the system? One thing hasn’t changed: Bournemouth are very unaggressive in defence. They rank at or near the bottom in interceptions and tackles, as ever. In the past, that was largely because the midfield got bypassed so often. This year they’ve added a real-live holding midfielder in Jefferson Lerma to help solve that particular problem. He’s doing pretty well.

But if you look at Lerma’s stats, you’ll see that he’s absurdly low in tackles/90 for a defensive midfielder, at only 1.9. For comparison, Idrissa Gueye is at 5.3, Mo Diamé on 3.9, Matteo Guendouzi at 3.7, and Wilfred Ndidi on 3.6. In fact, he’s only slightly above Jorginho: not a real holding midfielder, who plays for a super-high possession team to boot. That reads like a player who isn’t doing his job.

In fact, he’s doing his job very well – it’s just a different job. The key stat is clearances. Among midfielders, Lerma is second only to Marouane Fellaini (of course) in that category. And the two of them are way, way ahead of the rest of the league. In other words, Lerma is sitting a bit deeper and not challenging the man, at least nowhere near as much as others in his position.

Add conservative defenders to a screener that clears instead of tackles, and you get a side that’s compact in defence, particularly in the middle. Which makes you think counter-attack – and that’s the magic word. From a relatively high-possession team that relied on passing patterns starting from the wings, Bournemouth have morphed into a counter-attacking side, the kind which blistered Watford 4-0 last time out.

Now for the stat dump, and I promise you the numbers are worth looking at. Here are the average passes/match for Bournemouth’s three-and-a-bit years in the league, in chronological order:

While teams like Manchester City and Chelsea are pushing their pass numbers into the ionosphere, Bournemouth are dropping theirs down the well. This is particularly remarkable because the Cherries have faced an easier schedule so far. They’ve been playing teams who would ordinarily give them the chance to rack up the passes.

On to possession percentage, then. Here are the numbers since Bournemouth entered the league:

Again, there’s a significant drop. This year’s number is slightly higher than last year’s so far, but once Bournemouth play the big six, it’ll drop. I’d bet the house (and a winter home in Florida, if I had one) that their average possession will be beneath last year’s figure once we reach the halfway point.

What’s clear from these stats is that the change hasn’t just suddenly happened; it’s part of a considered process. Did you notice anything different last year? I certainly didn’t, and I watched all the matches. That’s testimony to two things: my own stupidity and the intelligent, gradual way Howe has managed the transition.

Another stat with notable change is attempted dribbles/match. Possession-centric teams tend to dribble more, counter-attacking teams less so. Bournemouth’s dribbles have decreased in the same manner: 19.6, 18.3, 16.8, 14.9. Josh King is still the primary dribbler, but wing dribblers like Jordon Ibe and Marc Pugh have been replaced by more direct players like Ryan Fraser and David Brooks.

Still more. Bournemouth are at their highest ever figure in blocked shots/match, again indicating a team that sits back. Then there’s PPDA (passes allowed per defensive action), the fancy stat that measures how much a team presses. Bournemouth have gone from ranking 8th to 11th to 18th in their three full years in the league. They used to press a bit; now they don’t. This season so far they rank 15th, which I’m guessing will also drop once they meet the rich guys.

Here’s my favorite. There’s a number from Understat called shots from fast attacks. Good counter-attack teams naturally tend to take more. In their title season, Leicester City registered an amazing 63. In their first three seasons, Bournemouth posted 17, 15, and 24. This year they’re on pace to hit 57. Only Manchester City, who attack any way they feel like, have more.

Last one, I promise. In past years, the Cherries have ranked highly in an unenviable category: percentage of shots taken from outside the area. It’s the sort of thing you find in a lesser side that emphasises possession, which explains why Fulham top the list so far this season. Bournemouth’s rankings in this category ince their promotion? Second, 5th, 5th, and now 17th.

So the Cherries have been completely transformed in just over a season, and all you can say is wow to Howe. Of course, none of this would work without the players that fit the system. Fraser is one of the fastest in the league, and is useful both as passer and scorer. Callum Wilson, a pacey off-the-shoulder striker who runs the channels, is a natural for this approach. Brooks isn’t quite as fast, but he’s got decent pace and knows how to play directly. Even King, more a dribbler than a dasher, showed against Watford that he can run with the pack. Howe has at times been critiqued for his signings, but he’s assembled a team perfectly suited to the new Bournemouth.

We haven’t mentioned Lewis Cook yet, because he’s only made the last two line-ups. It seemed strange to keep such a talent on the bench. But if I had to guess, I’d say it’s taken him time to adjust to a full dress counter-attack. He’s a very good passer, but has been known to slow down play unnecessarily. If that’s the reason, it means Howe now feels he’s ready to play in a crucial position: the man who releases the sprinters.

Eight games in, the results speak for themselves. But, you ask, what happens when the Cherries fall behind? Then they have to attack, and remember how they were smashed 4-0 by Burnley? Fair enough. But they also came from two goals down to draw with Everton, and beat West Ham 2-1 after trailing 1-0. Plus, after Crystal Palace levelled their match with a 55th-minute goal, Bournemouth had all the good chances before winning with a late penalty. So they’re flexible enough to play effectively in many different situations.

Again, this is no fluke. Bournemouth are in sixth place on merit. The question is whether they can stay thereabouts once they’ve played everyone. At least we know that counter-attacking is a natural way to play against the top teams. Stay deep and hit them on the break. At Stamford Bridge they used that very strategy, and in the 29th minute created an excellent fast-attack chance for Callum Wilson. Had he scored, who knows what the result might have been? He missed the target, and still the lads held out until the 71st minute before losing 2-0.

In any case, Bournemouth have another useful weapon against the top sides, and that’s set pieces. They’ve always been good in dead ball situations, and led the league in set-piece goals last season. This year they have three already. Ryan Fraser is second only to Gylfi Sigurdsson in chances created/90 from free kicks.

No guarantees, obviously. Starting in early November there’s a six-game stretch including matches against Manchester United, Arsenal, Manchester City and Liverpool. Right after that, Wolves will be knocking on the door. But this is a side that knows exactly what they’re doing. They’ve married tactics, teaching and talent, and at the moment rate very high indeed on likeability and gatecrashability. Don’t be surprised if they stay at the party well into the night.