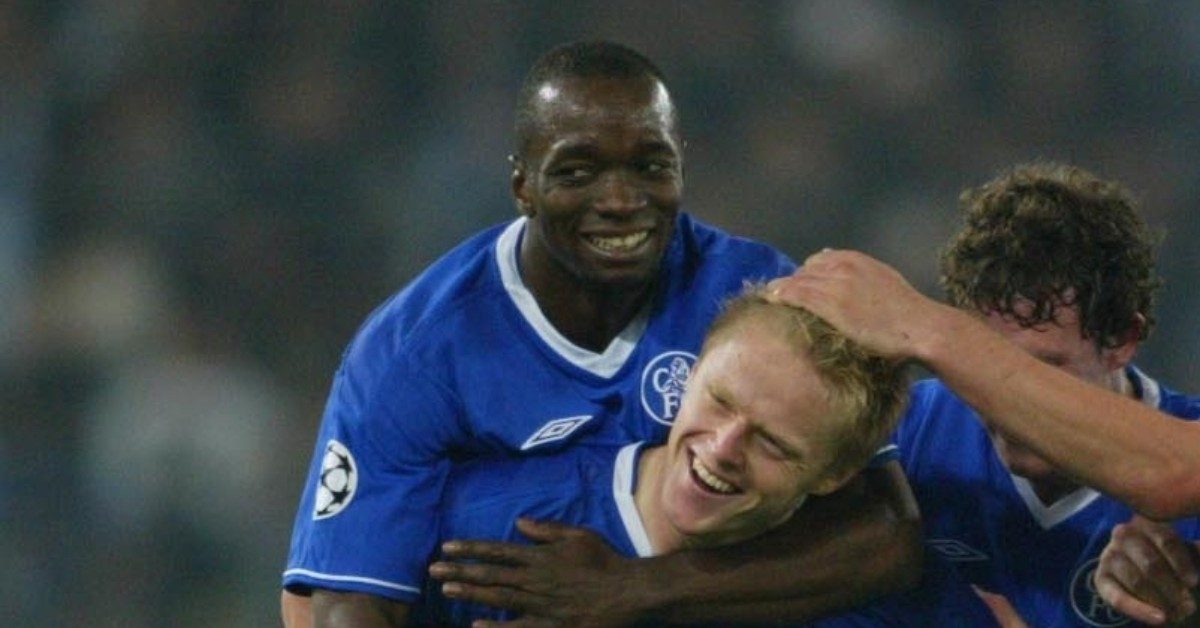 The Saudi-backed purchase of Newcastle is imminent. Fans will hope that the new owners follow in the footsteps of Roman Abramovich at Chelsea.

That lovely fella Mohammed bin Salman is about to oust Mike Ashley at St James’ Park and the inevitable expectation will be that he invests quickly and lavishly.

He would not be the first owner to make an impression by splashing the cash. Every member of this XI, plus the back-ups, were signed in the first transfer window after a club’s takeover.

Goalkeeper: Edwin van der Sar (Manchester United)
The first signing of the Glazer era at Manchester United remains one of the best. It took six years for Sir Alex Ferguson to source a convincing Peter Schmeichel replacement; Edwin van der Sar represented an improvement by the end. Four Premier League titles and a Champions League trophy were added to the Dutchman’s burgeoning collection from his Old Trafford arrival in 2005 to the sunset of retirement in 2011. What a custodian.

Back-up: David James (Portsmouth)
Alexandre Gaydamak knew Portsmouth needed an upgrade for a duty shared by Sander Westerveld, Jamie Ashdown and Dean Kiely in the 2005/06 season. David James kept as many clean sheets in his first five games as that trio managed in 38, breaking numerous appearance records while winning the FA Cup and being named in the PFA Team of the Year in 2008.

Right-back: Glen Johnson (Chelsea)
Roman Abramovich got the ball rolling on his £2bn overall spend at Chelsea with the purchase of Glen Johnson, fresh from relegation at West Ham. The defender was not a resounding success at Stamford Bridge but made 71 appearances and won the first two trophies of his career in 2005 with a League Cup and Premier League double. A solid return for a player loved by Claudio Ranieri and usurped under Jose Mourinho by the slightly more defensive Paulo Ferreira.

Back-up: Habib Beye (Newcastle)
Sunday, Monday was a Sam Allardyce “bargain” signed in those naive and exciting first days under Mike Ashley at Newcastle. He made his debut as a substitute in Derby’s only Premier League win of the 2007/08 season, turning things around to become a fan favourite with that campaign’s Newcastle Player of the Year award to his beautiful name.

Centre-back: Sol Campbell (Portsmouth)
It was the beginning of the end for Sol Campbell at Arsenal when Bobby Zamora tormented him to inspire the Gunners’ last ever home defeat at Highbury in February 2006. The centre-half recovered well enough to score in a Champions League final but by July he sought a “fresh challenge”. Portsmouth provided just that, tempting Campbell south despite interest from Juventus and Fenerbahce. Three seasons at Fratton Park provided a full rehabilitation and transformation into a fine defender once more, bringing a 2008 FA Cup winner’s medal, one final European journey and a series of mid-table finishes. Campbell jumped in 2009 before the Pompey ship sank towards relegation in 2010.

Back-up: Matt Upson (West Ham)
A £7.5m purchase from Birmingham in January 2007, Matt Upson scaled the West Ham heights of 9th and lows of relegation over four-and-a-half years. A club captain at one stage, he remains one of the most recent Hammers to score a World Cup goal.

Centre-back: Michael Turner (Sunderland)
The Guardian suggested it was ‘an extraordinarily cheap deal’ and ‘a candidate for transfer market steal of the season’ so bizarre was the summer of 2009. Ellis Short wanted to make an early impression at Sunderland and handing £4m over to Hull for a centre-half tipped for England selection was his solution. Turner stayed at the Stadium of Light for three years, finishing 13th, 10th and 13th before joining Jamie O’Hara’s favourite club.

Back-up: John Mensah (Sunderland)
Turner once called “top quality, top drawer, world-class” John Mensah the best defender he had ever played alongside. Shame he was so very injured.

Left-back: Jose Enrique (Newcastle)
Another Ashley signing – it’s a wonder those ungrateful Newcastle fans don’t like him – Jose Enrique was actually the biggest purchase of that summer transfer window in 2007. Two seasons of Premier League football culminated in relegation, the Spaniard playing a key role in their immediate promotion as he was named their Player of the Year in the Championship. One last campaign at St James’ Park took them to 12th before Enrique headed to Liverpool for a small profit.

Back-up: Wayne Bridge (Chelsea)
Over five years at Chelsea, Wayne Bridge won three trophies and broke numerous Arsenal hearts. He did only start 12 games of their 2004/05 Premier League title win, but played every minute of their 2007 League and FA Cup wins. And yeah, the Arsenal goal.

Right-winger: Ji-sung Park (Manchester United)
The source of every Paul Scholes and Andrea Pirlo nightmare, Ji-sung Park was something else. His work-rate, movement and discipline was the stuff of Manchester United legend as he played important roles in four Premier League titles and nine other trophies, including the 2008 Champions League. Sir Alex Ferguson has often spoken of his frustration at having to leave the South Korean out of the squad for that final, such was Park’s impact and influence since moving to Old Trafford in 2005.

Back-up: Yossi Benayoun (Liverpool)
The first player to score hat-tricks in each of the Champions League, Premier League and FA Cup, Yossi Benayoun was absolutely that guy for Liverpool. Some might have been underwhelmed when he joined a team prepped for a Premier League title challenge, leaving West Ham after two productive years. But the Israeli international won every critic aside from manager Rafael Benitez over with strikes against Real Madrid in the Bernabeu, similar scoring contributions in whirlwind games against Fulham and Arsenal in April 2009, and an effort that temporarily put the Reds ahead in their 2010 Europa League semi-final against Atletico Madrid at Anfield.

Central midfielder: Claude Makelele (Chelsea)
“I have a fantastic watch,” said a beaming Claudio Ranieri. “And Claude is my battery. The watch runs with the battery. Mr Abramovich wants to build a big team, one of the best in the world. We have a start. Now we must play, we must build first the foundations.” Makelele was indeed the first layer of solidity that Chelsea needed, but Mourinho would be donning the hard hat instead of Ranieri. The French midfielder won as many Premier League titles as he scored goals for the Blues, calling time on five years at Chelsea after playing 120 minutes of the 2008 Champions League final before coming off for penalty specialist Juliano Belletti in preparation for the upcoming shootout drama.

Back-up: Lucas Leiva (Liverpool)
“He gave his very best every time he represented Liverpool,” Steven Gerrard once said of “one of the best people I have met during my time in football”. That was not enough for some as Lucas Leiva could not debunk every doubter over a decade at Anfield, but winning a trophy, reaching two finals and ranking in the top 50 for all-time Liverpool appearances during one of the club’s more tumultuous periods was not a bad return.

Central midfielder: Joe Cole (Chelsea)
Considered at one point to be the natural successor to Gianfranco Zola’s crown of technical brilliance at Chelsea, Joe Cole was better than perhaps most people remember for the Blues. Those who think Jose Mourinho ruined him by replacing his inclination for flair and skill with hard work and defensive responsibility must at least accept he became a more rounded player under the Portuguese and beyond. Cole left with three Premier League winner’s medals, playing crucial roles in title deciders against Manchester United in 2006 and 2010, while picking up a League Cup, two FA Cups and the Chelsea Player of the Year award for 2008. If Avram Grant could go back in time he probably wouldn’t bring him off for Nicolas Anelka in extra-time of that year’s Champions League final.

Back-up: Stiliyan Petrov (Aston Villa)
Randy Lerner started as he meant to go on at Aston Villa, sanctioning only one signing in his first summer as owner. Didier Agathe and Chris Sutton joined later in the year as free transfers but Martin O’Neill started his Celtic tribute act by tempting Stiliyan Petrov south. A captain. A 2009 Player of the Year. A League Cup semi-finalist. An FA Cup runner-up. A 40-yard half-volley against Derby. A finish between 6th and 16th in sixth consecutive seasons. A hero.

Left-winger: Damien Duff (Chelsea)
A favourite of Mourinho, Ranieri’s mother, supporters and anyone with a functioning set of eyes and senses, Damien Duff was far from out of place in Chelsea’s mid-2000s collection of wonderful wingers. The combination between him and Arjen Robben was positively petrifying for opposition defences, who would have struggled to identify a collective weakness between them. Duff was quick, strong, skilful and happy to track back, one of the understated cogs in a side that won and defended the Premier League title.

Back-up: Ryan Babel (Liverpool)
He will come good one day. Ryan Babel will forever have all the attributes without tying them together in a consistent, coherent package. The Dutchman had his moments at Liverpool – against Arsenal and Chelsea in the 2008 Champions League knockout stages, with a late winner at Anfield against Manchester United the highlight – but the Babelcopter only ever hovered around true greatness without truly taking off.

Centre-forward: Fernando Torres (Liverpool)
“We were very, very close to being one of the top teams, but when you let Xabi Alonso and Javier Mascherano leave, it’s a clear message. The old owners wanted to sell the club too many times and the team was being weakened.” Fernando Torres laid the responsibility for his acrimonious Liverpool departure squarely at the feet of the disreputable Tom Hicks and George Gillett, who made him the club’s record signing in July 2007, five months after completing their purchase from David Moores. As frustrating as the lack of trophies must have been, 81 goals in 142 games and a double-your-money offer from Chelsea in January 2011 represents decent business.

Centre-forward: Luis Suarez (Liverpool)
Back when Fenway Sports Group went by their original name of New England Sports Ventures, John W. Henry, Tom Werner and friends were given an immediate taste of sweet and sour in the transfer market. Their takeover was completed in October 2010, giving way to a remarkable 2011 winter window in which Torres left but Luis Suarez and Andy Carroll joined to replace him. The latter might tower over the former but Suarez comfortably overshadowed Carroll at Anfield, netting 82 goals in 133 games to the tune of one trophy: the 2012 League Cup, in which he did not score beyond the round of 16.

Back-up: Fernando Llorente (Swansea)
The Swansea era of Jason Levien and Steve Kaplan was once underpinned by promise and excitement, the latest chapter in their perennial quest for development and improvement. That hope turned out to be painfully false but summer 2016 did deliver Fernando Llorente to south Wales, the Spaniard scoring 15 of their 45 Premier League goals in his only season at the Liberty Stadium.