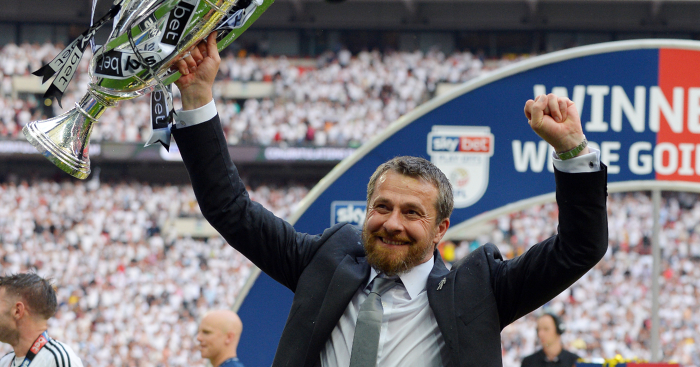 Whatever your thoughts on Saturday night’s big game, you can’t really deny that the right team won. You can ask questions about whether that should have been a red card, and you undoubtedly feel bad for the losers, but for the good of the game, you can ultimately only be happy that Fulham triumphed over Aston Villa in the play-off final.

Slavisa Jokanovic has been one of the most exciting managers in the Championship for a few years now: it is often forgotten that he was the man who got Watford promoted in style in 2015, only to be discarded for Quique Sanchez Flores. Having first insulated the Cottagers against the threat of relegation, he took Fulham to two successive play-off campaigns playing exciting, attacking football. No Championship side has scored more than their 194 goals since he took charge.

The Premier League has infamously had no shortage of dross at the bottom of the table over the past few seasons, and this year was no different. 33 points would have been enough to keep you up this year if you had a reasonable enough goal difference, with Swansea, Stoke and West Brom eventually proving to be the worst of the worst, ending a combined 24 years in the top flight across the three clubs.

What ultimately cost all three was a combination of complacency and a lack of imagination, the two tandem elements guaranteed to throw a club into a spiral. Failing to learn the lessons laid out by Wigan, Sunderland and Aston Villa, this year’s relegated trio got too comfortable in their position as surprise long-term mid-table success stories, stopped evolving and paid the price. Had Southampton gone down instead, as they came alarmingly close to doing, you could write that precise same paragraph.

It’s easy for this kind of thing to creep in. It started for Swansea when they panic-fired Garry Monk and brought in Francesco Guidolin, ending nearly a decade of careful managerial selections and instead finding themselves lurching from one short-term stop-gap measure to the next: from Guidolin to Bob Bradley to Paul Clement to Carlos Carvalhal.

Stoke’s attempt to rescue the club from Tony Pulis’ stagnancy only led to another five years of standing still under Mark Hughes, until eventually their terrible player recruitment caught up with them. Even after their relegation was confirmed, departed manager Paul Lambert was talking them up as being “too big not to bounce back”, suggesting that those within the club still had not taken their medicine.

As painful as it makes it to watch the Premier League at times, this is football doing what is supposed to do: flushing out the untalented, the uninterested and the uninspired, and rewarding the gutsy, the innovative and the forward-planners. Ignoring the Mark Hughes and Neil Warnock-shaped elephants in the room for a moment, this summer feels especially efficient in that regard, with the tired ideas of Pardew, Lambert, Arsene Wenger, Sam Allardyce, Tony Pulis and David Moyes all now out of the top flight, replaced by the infinitely more exciting Jokanovic, Unai Emery, Marco Silva, Nuno Espirito Santo and Manuel Pellegrini.

If that reads as an indictment of British managers, then it is justly so, for that is merely the excuse that the old guard like to hide behind rather than admit that the fans’ needs have moved on from their respective heydays. With the top six so immovably entrenched, there is a limit on any promoted club’s ambitions; given the choice between staying up by playing unaesthetically pleasing football or going down with at least a little bit of verve, most fans would now choose the latter. Staying up is no reward if all it means is another year of the same old shit.

You could point to the mid-season appointments of many of the names above as a very fair counter-argument to this, but it’s beginning to feel like clubs all the way down the pyramid, but especially in the top two tiers, are becoming aware that they now have less to lose than ever by taking a chance and doing something different and exciting.

We talk about parachute payments and the riches of the Premier League providing an advantage in the Championship, but the truth is that the bounce-back rate of relegated clubs in the five years after falling out of the top flight has been pretty constant since at least 1972.

The big change has been that the number of clubs Doing A Leeds has dried up considerably: Sunderland may yet break this trend, but the worst-performing relegated sides since 2011-12 have been Wigan, Bolton and Blackburn, all of whom have been living at the bottom of the Championship or the top of League One since their respective drops from the big time. In other words, you would have to stuff things up pretty spectacularly to fall further than the second tier.

Meanwhile, over the past few years, plenty of clubs have taken what seemed like gambles to break out of the Championship pack and have been rewarded for it. Huddersfield effectively turned the club over to David Wagner in 2015, Watford have continuously replaced their managers despite each of them achieving their initial objectives, and whatever you think of the way Wolverhampton Wanderers have gone about achieving their promotion, they still took a chance by running the club according to the…let’s say ‘advice’…of Jorge Mendes.

All of which adds up to one conclusion: taking a gamble and going for something exciting is now less of a gamble than ever. It would be to the considerable betterment of the competition, the clubs and most importantly the fans if that message could keep filtering up to the boardrooms.