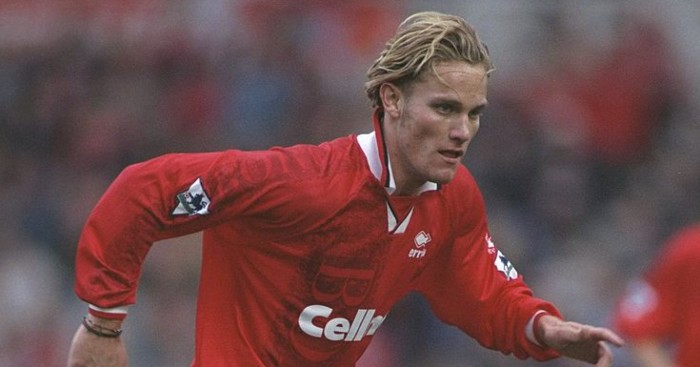 On Tuesday night, Middlesbrough slugged out a 1-1 draw with Preston at the Riverside in front of less than 18,000 spectators. Jonathan Woodgate’s men languish 19th in the Championship with their promotion hopes looking slimmer by the game.

Rewind 23 years ago and it was a very different Boro with the arrival of superstar names, cup final appearances as well as a controversial relegation.

Danish striker Mikkel Beck was one of a number of arrivals in the summer of 1996, joining from German outfit Fortuna Köln. He told the Talkin Fitbaw Podcast it was one of the most enjoyable spells of his career:

It was a very exciting time for Middlesbrough back then, how did the move come about?
“They spotted me before Euro 96, playing for the national team in the qualifiers. They liked what they saw.  They were after a young and talented striker and they found that guy in me.

“I had lots of possibilities that summer, I could have signed for 25 to 30 different clubs in Europe.

“I chose Middlesbrough because I’d always liked the Premier League and Bryan Robson had always been my hero and idol. So when I could have him as my coach I thought that was something really interesting for me to do so I decided to sign for Middlesbrough.”

They had some superstars playing for them, the likes of Fabrizio Ravanelli, Juninho and Emerson to name but a few, what was it like to share a dressing room with those guys?
“It was great, I also played with Gascoigne, Merson, Branca, Branco and Pallister. We had lots of big football players.

“It was a good time, a very enjoyable time and exciting.  We played some great football, it was nice to be part of that team.

“I had lots of memorable experiences but also on the negative side the relegation the first season which, in my opinion, should never have been a relegation. We had three points deducted at the end of the season and that was enough for us to go down, so basically we were relegated on paper not on the pitch.”

You reached the FA and League Cup finals, was it disappointing you couldn’t cross the line and win a trophy?
“Yes, especially the one against Leicester because we were leading 1-0 until the end of the game then Heskey equalised in the dying minutes and we had to go to replay at Hillsborough where we lost 1-0. That one was the hardest one to lose.

“The FA Cup final against Chelsea, we were never really in the game, they were leading after two minutes and they never looked back from there, but we should have won that one against Leicester for sure.”

Playing at Wembley, what was that like?
“That was amazing, at that time that was the most mythical stadium in the world and everyone wanted to try and play there and I was lucky to play there twice so it was a great experience.”

What was Bryan Robson like as a manager to play under?
“He was a good manager, he did things his way but he always trusted a lot of his players.  He liked good football and it was nice to be part of it, but I suppose he had to be judged on results and unfortunately we didn’t win anything and we got relegated that season but I liked him as my manager and he was very exciting to play under.”

What was it like playing alongside Paul Gascoigne?
“It was interesting, he attracted a lot of attention for sure, he was a world name but he was at the end of his career so I didn’t play with the best version of Gascoigne.

“You could feel that he was not at the top of his game anymore but he still showed some glimpses of what he could do certainly in training and in a few games.”

You linked up well with Paul Merson when you won promotion back into the Premier League, how much fun was it to play alongside him?
“That was a totally different story because, for me, I was lucky to play with the best version of Paul Merson. We quickly gelled on the pitch and we quickly understood each other.  It was amazing to play alongside him, I scored a lot of goals and he scored a lot of goals also and I really enjoyed that partnership.”

You left Middlesbrough in 1999 to join Derby County, were you disappointed to leave the club?
“I was not happy to leave the club.  I had played half a year in the Premier League playing alongside Hamilton Ricard and we had started the season well but it was just a decision from the club.  They brought in some other strikers –  Alun Armstrong, Brian Deane and Marco Branca – and we had too many strikers and one had to leave.  Unfortunately it was me that had to leave.

“I would have liked to stay because I liked my life there and liked playing for that club but sometimes in football things have to have an end.”

How much did you enjoy playing in front of the Boro fans at the Riverside?
“When I played there it was amazing, for me it was probably one of the best stadiums in England.  It had an incredible atmosphere, the whole area were 100% behind the team, there were always sell out crowds and it was an amazing time of being a Middlesbrough player.

“I’ve not been back the last couple of years, I don’t think the people are behind the team as they used to be and probably not seeing the same kind of exciting games at the Riverside but I enjoyed my three and half years at the club and it was amazing to play there.”