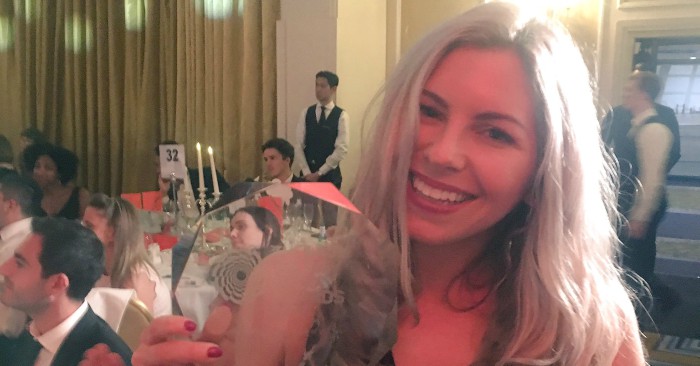 Lindsey Bowers is is an award-winning digital producer and journalist. She worked on Good Morning Britain with Piers Morgan and Susanna Reid and, somewhat incredibly, likes Piers Morgan. You can follow her at @LindseyCBowers.

Hello Lindsey, how’s the world finding you today?
“So far it’s been good as I haven’t tripped up, broken anything or made a tit out of myself. Although that could be set to change completely after answering your questions.”

Well, let’s see. First up…football. What do you make of it?
“I don’t know much about it but I do know it’s important. I don’t support a team but I’ve always been around people who love the game and my interest is piqued when the World Cup is on. So I at least know England are crap.”

You’re spot on there – England are crap. Have been for ages. It’s part cultural, part structural and part Steve McClaren’s fault. Moving on … am I right in thinking you come from a West Ham-supporting family? Is that because the Bowers are hard-as-nail East End cockneys?
“Yep, we eat hammers AND nails for breakfast. Actually, I’m from Essex and also have a Manchester United supporter for a step-dad. If that rule by which you support the nearest team to where you grew up is a real thing, they should actually be Southend supporters.

“I went to a Southend match the other week, actually, because the team started wearing a new kit with a cause very close to my heart on it – The Amy May Trust. I can’t remember who won but the kit looked splendid. And I got to sit in a box and eat really good food. They brought us sausage and mash and wine and chocolate cake. So my knowledge of the game didn’t increase but I did get a bit drunker and fatter.”

Hangover level: Just ate a Pot Noodle for the first time since I was 18. And immensely enjoyed it.

That’s always a good thing. Back to West Ham, I’d like to test your knowledge of the club by giving you the name of five former Hammers and seeing how much you know about them.
“Ah dear.”

Ron Greenwood:
“He should probably get that looked at. Yup, I’m going to resort to penis jokes to deflect, I’m afraid.”

Not the best start, Lindsey. Let’s move on to ​No.2 ​– Bobby Moore:
“I think I know this one. Famous sixties footballer? Possibly the first striker to score with a fag hanging out of his mouth?”

Yes and very much no. No3 – Julian Dicks:
“Well this just makes the penis joke thing a bit too ridiculously easy now.”

Fair point. No4​ -​ Florin Raducioiu:
“I think I have a perfume called that.”

It’s possible. No5​ -​ Paolo Di Canio:
“I just Googled this one and the first thing that came up was a picture of an angry-looking man doing a dodgy-looking salute, so I don’t think I’m missing out on much by not knowing who he is.

“Now I’m falling down an internet black hole and reading a story about him … ‘I’m not racist,’ he says. Sorry, but anyone’s who’s ever had to say that is probably at least a little bit racist.”

Nailed it, Lindsey. Right, No.5 – Pedro Obiang:
“Um. Is he from Spain? I’m glad my dad doesn’t know what an internet is otherwise I’d probably be disowned by now.”

I’ll be honest Lindsey, your West Ham credentials are pretty weak. But given everything that’s going on at the club right now, that’s probably not a bad thing.

Speaking of London-based football clubs who aren’t very good at football, let’s talk QPR. A little Loftus Road birdie tells me you’ve seen a bit of them.
“I have. I used to go out with Clive Whittingham, who runs the Loft For Words fan website. He’d go to every match, home and away, whatever the weather or distance and I went to quite a few with him and his mates. Despite not knowing much about the game – Clive once muttered something about the transfer window opening then shook his head as he saw me looking at the nearest window in complete confusion – I enjoyed drinking with the QPR crowd.

“One of the most beautiful sights I’ve seen is a bar full of grown men erupt into ecstatic tears when they were promoted. I apparently also saw them beat Chelsea but have no recollection of this whatsoever. Probably because they got me drunk after.”

What did you make of Clive and the other QPR fans erupting into tears in that bar? Brought home what an emotional sport football is?
“God yeah. You can’t help but get caught up in it. You haven’t experienced true joy until you’ve seen a drunk fat bald bloke crowd surfing in a Shepherd’s Bush bar screaming out the lyrics to You’ll Never Walk Alone.”

I can imagine. Sounds amazing. On the flip side…I’m aware you also saw QPR lost 6-0 defeat at Nottingham Forest . I’m guessing that wasn’t such a pleasant experience.
“It wasn’t very often I’d go to an away game, but I lived in Sheffield at the time so agreed to go to this one as it was only down the M1. It was freezing cold, pissing down with rain and I was feeling really unwell that day, so watching the team I was there to support let goals in over and over and over again was pretty low down on the barometer of fun things to do.”

Bloody hell, that sounds awful. But in its own way, also glorious. Speaking of that Forest game, do tell me about your trip to Hooters, which if I’m not mistake is directly opposite Nottingham rail station?
“That might have been the sole reason I agreed to go to that game. I was intrigued. The beers and fried food there are excellent, even if they do come with a side order of low self-esteem.”

Fair enough. Do you still keep an eye on QPR?
“I’m still connected with a few of the QPR lot on social media but I have absolutely no idea what league they’re in or how well they’re doing. Better than they were back then, I hope.​”

​Another London club I’m aware has grabbed your attention is Arsenal, which came through your time working with Piers Morgan on Good Morning Britain. Piers comes across as a self-obsessed prat whose desire to gain publicity at every opportunity has shredded his reputation as a sharp and innovative journalist. His friendship with Donald Trump is also highly dubious and brings his position in British public life into disrepute. Fair?
“Blimey. Say what you mean, Sachin!”

I’m not a fan of his Lindsey. On that note – tell me a funny story about Piers, and by funny I mean one that is so humiliating I can use it to goad him on social media.
“All I’m going to say about Piers is he’s actually a big old softie. But I may have only said that because it’s quite fun to watch him fly into a rage.”

Fair enough. Susanna Reid. She seems really nice.
“She is! In all seriousness, having the opportunity to work with both of them on GMB was an absolute pleasure. I think they’re both stellar journalists, in quite different ways.”

Susanna is a big Crystal Palace fan. Did she talk about the Eagles much while you two worked together?
“Piers and Susanna discussed football on GMB quite often and let’s just say Susanna was the one most likely to be happy with the result.”

For someone who doesn’t have much interest in football, you have a decent amount of experience of it – going to games, being around people who are fans of the sport. Any desire to get into it properly?
“The fact I still don’t understand the offside law after going to all those games should answer that question.”

To be fair, most people don’t understand the offside law these days. It’s become a right dogs dinner.

Finally Lindsey, anything you’d like to ask me?
“I’m trying to think of a subject you might know nothing about which I can quiz you on. But as a footballl writer you probably know a lot, right?”